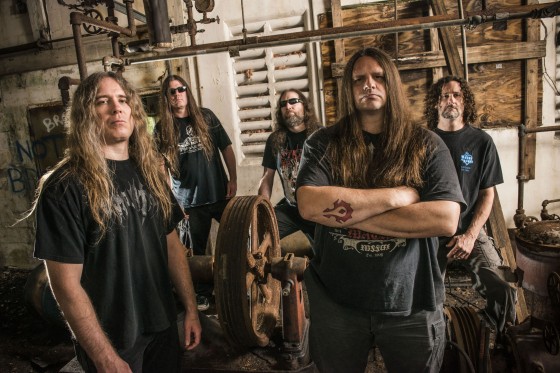 One of the darkest bands in all of metal has just become a shade darker. Like a horror movie for the ears, Cannibal Corpse has always been a source of hedonistic torment. Forged in the frozen putrid landscape of Buffalo, NY back in 1988, the band quickly rose to acquire worldwide success, fame, and also, controversy. Coming off a nationwide tour, Rockstar’s Mayhem Festival, the group is set to release their 13th surgical strike of utter brutality, A Skeletal Domain. For a band that’s been in existence for 25 years, they have had a surprisingly small number of lineup changes. The current lineup, Alex Webster (Bass), Paul Mazurkiewicz (Drums), George Fisher (Vocals), Pat O’Brien (Guitar), and Rob Barrett (Guitar), have been together since 2005 collaborating on the past three albums. The Bible Of Butchery, the bands first officially authorized audio biography will be released in September and is highly anticipated by fans globally.

A Skeletal Domain is one of the creepiest and eerily evil releases in the legendary history of these reigning kings of death metal. Cannibal Corpse’s previous album Torture (2012) was widely accepted by critics and fans as possibly the bands best album yet. Even though A Skeletal Domain sounds nothing like Torture, the fact that it is equally impressive is nothing short of amazing. “High Velocity Impact Splatter” ignites the record with a scalding assault of technical genius. George “Corpsegrinder” Fisher aka Nathan Explosion unleashes a bloodthirsty scourge of vocal annihilation. There is a very short list of names which can stand up to the power and longevity of Fisher’s work, especially when it comes to live performances. The entire album is maliciously choppy and the song “Kill or Become” is a disfigured master butcher with a quick ax. Rabid solos rip through the body of every composition screaming like a banshee with perfect timing at the helm of master shredders O’Brien and Barrett. Every album gets better and better, especially since reacquiring Barrett who had been a part of the band from 1993 to 1997. He wrote or helped write some of Cannibal Corpse’s classics such as “Devoured by Vermin” from Vile (1993) and “Barbaric Bludgeonings” from Kill (2006).

Warning A Skeletal Domain may cause severe spontaneous evisceration.  Pat O’Brien, notoriously known by fellow musicians for creating extremely difficult riffs took the lead in writing most of the songs on the album. Some of his songs in the past such as “Frantic Disembowelment” have been so difficult to play, they have only been performed live once. The diversity of speed and technicality amongst tracks creates a constant battle. Like celestial bodies locked in a binary cosmic waltz pulling towards a beautiful cataclysm, only to leave behind the pinnacle of darkness devouring all light. Ominous melodies plague the record, especially in “Funeral Cremation” and “A Skeletal Domain”. Webster’s bass lines are extremely dominate while echoing through the entire album like the tortured screams of a heretic in a brazen bull. He is the conductor and mastermind of the band, writing most of their songs and lyrics throughout the bands fabled history. “Icepick Lobotomy” will leave listeners drooling on themselves as if they had just received one from the destroyer of frontal lobes himself, Dr. Walter Freemen.

Fans will be tipping there hats to Mark Lewis of Audio Hammer Studios after ingesting this one. The album could not have come out any better. It’s just as raw and gritty sounding as Kill if not more so, and arguably the bands most complex achievement. This gore obsessed arrangement is the front-runner for metal album of the year. “Headlong Into Carnage” and “Bloodstained Cement” are both as intense as jumping off the Freedom Tower into a wood chipper. Paul “Berserkiewicz” has always been a pillar of Cannibal Corpse’s maniacal construction.  As the spine of this sinister beast, he has always found a way to create perfect symmetry between rhythmic pace and a frantic bombardment of total percussion slaughter. The album draws influence from every single piece of music the band has ever released, a perfect conglomeration of an entire discography. The final track “Hallowed Bodies” ends the album with a paralyzing wailing intensity, causing listeners to suffer dozens of compound fractures as a result of an immediate onslaught of acute pre-mortem rigor mortis. A Skeletal Domain is a cranial shattering masterpiece and a defining crown atop the pale horse of death metal. CrypticRock gives it a 5 out of 5. 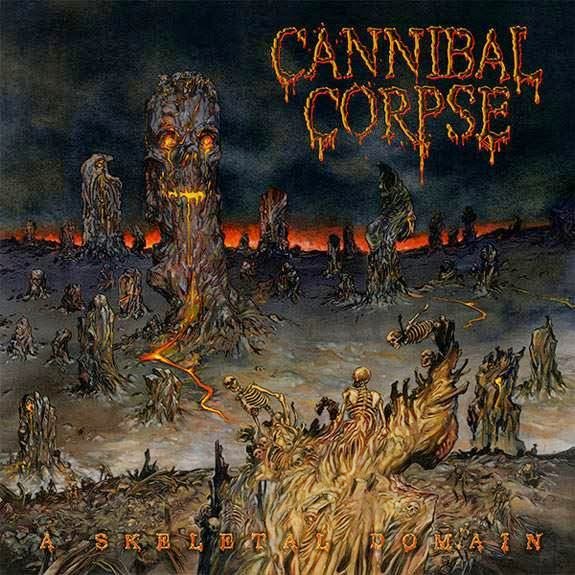 James Pesature is a metal head, literally part of his head is made of metal. With a Bachelors of Science in Graphic Design he is deeply rooted in the arts and enjoys all forms of artistic expression. He has worked as a contracted fine artist/designer for musicians of various genres creating album covers, logos, apparel, and packaging. After two year’s as Manager of Fan Photography for the NHL franchise the Boston Bruins, James has moved on to shooting concerts capturing high energy artistic photos of various bands from around the world. See his work at Magnertar Studio