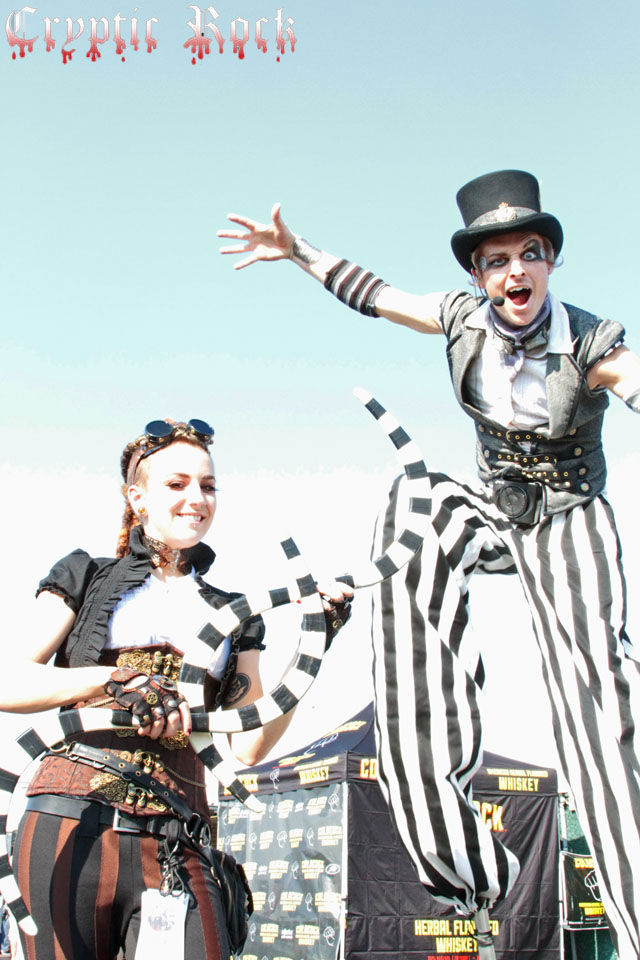 Established in 2010 Carnival Of Madness has become the premier hard rock festival in North America. 2013 marks the return of Shinedown to the Carnival of Madness. The festival showcases a solid line-up of bands including Shinedown, Papa Roach, Skillet, In This Moment, Sevendust (on select dates) and We As Human. For the first time in the carnival’s existence a real carnival like atmosphere is present with jugglers, stilt walkers and many more. On a comfortable August Sunday afternoon in Asbury Park NJ the carnival opened up the month long trek to a near sold out crowd at The Stone Pony Summerstage. With doors opening at 4 PM the crowd gathered almost 2 hours prior with a line of rock fans formed for blocks. As fans entered the carnival they were greeted by a excellent mix of rock and family fun type atmosphere. All guests were greeted by Carnival performers setting the stage for what would be a great evening of rock n roll. Cryptic Rock arrived early to see all the bands and provide complete coverage of all the Carnival Of Madness had to offer. 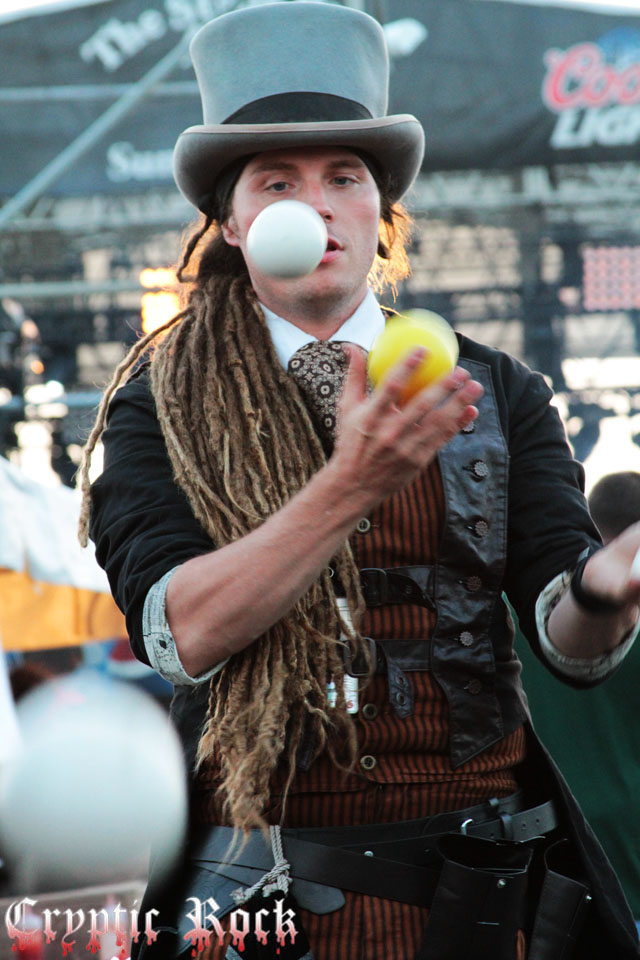 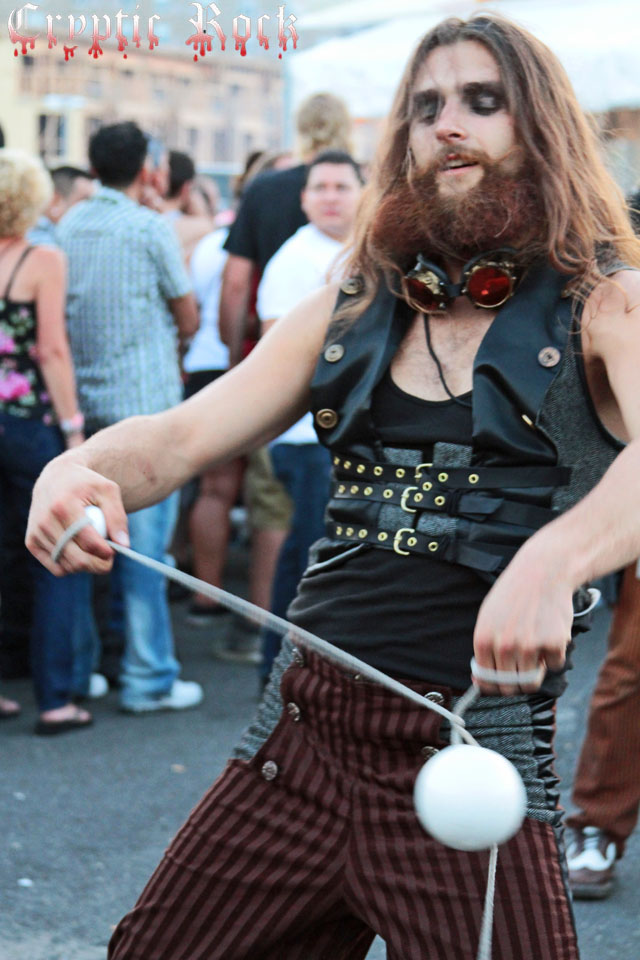 We As Human – Starting off the carnival at 4:30 PM Nashville TN rockers We As Human lead things off with a bang. Flying high off the band released debut self-title album We As Human earlier this summer. The album is climbing the rock charts and We As Human is quickly becoming a well known rock band. With an energetic set of hard rock tracks the crowd gathered to check these guys out. Many of which knew of the band but also many which did not and walked away from the set directly to their merchandise table to buy the album and meet the band. We As Human definitely began the festivities of the carnival on a high note leaving a lasting impression. 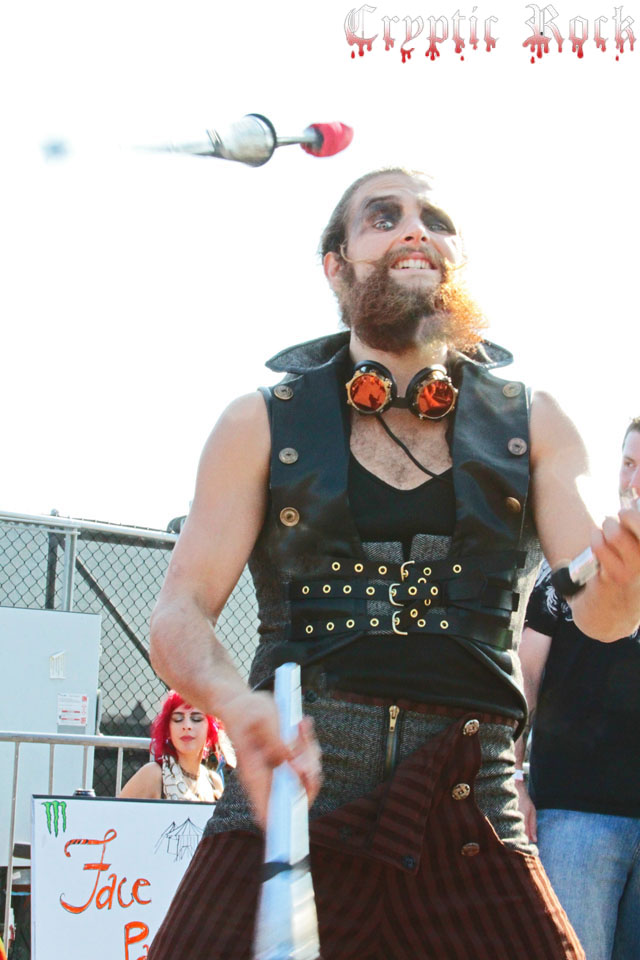 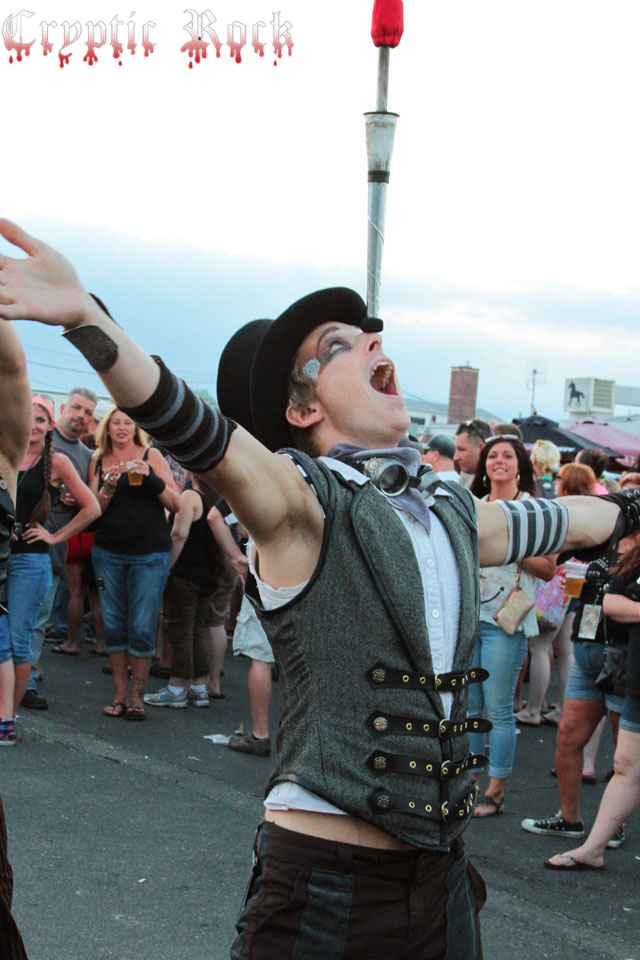 Sevendust – With a packed house already at 5:30 PM hard rocking veterans Sevendust hit the stage. Playing to a massive crowd of dedicated fans with hands raised singing along with each song. There is something to be said for the longevity of Sevendust and the energy they arouse each time they perform. Treating fans to a strong set highlighted by their classic tunes and many new tunes from their latest album Black Out The Sun. A stand out moment in the set was when vocalist Lajon Witherspoon addressed the crowd to speak of a new song entitled “Til Death”. Overwhelmed by his emotion Lajon choked back his tears and belted out one of his strongest performances of the date. Sevendust proved they are still a force and leader in the hard rock and alternative metal world. 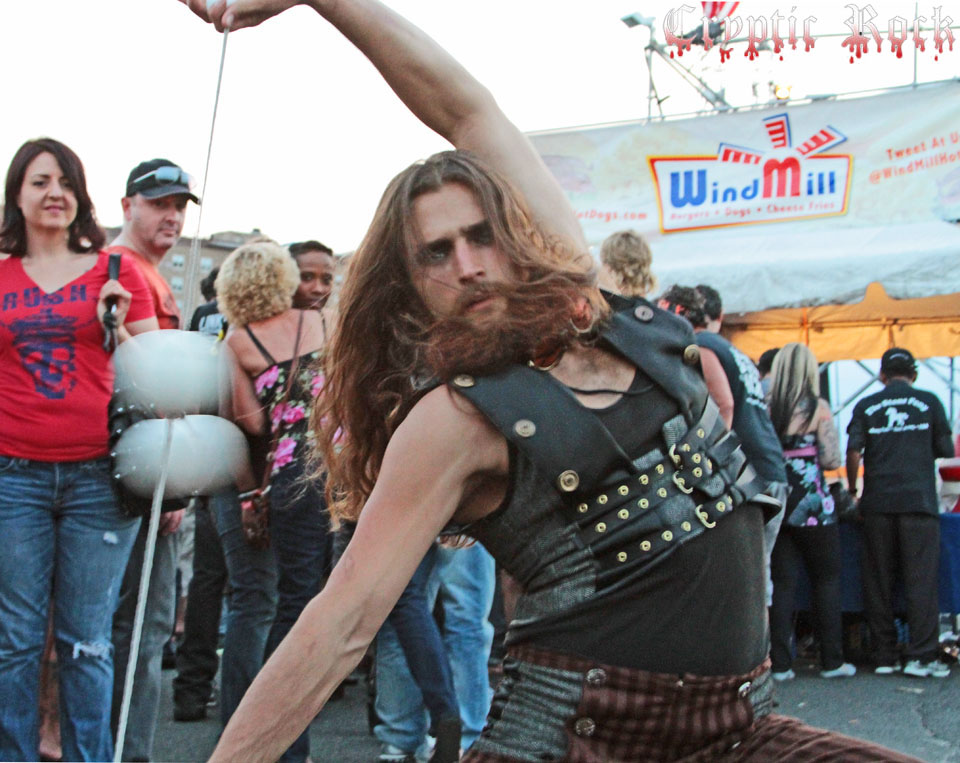 In This Moment – Two bands into the day at 6:45 PM In This Moment brought their theatrical performance to the stage. A band which reinvented themselves after departure from former members to put together their strongest album to date in 2012 Blood . Maria Brink and company provided a mystical performance highlighted by costume changes and eye catching stage setup. With a very sexual undertone female dancers surrounded Brink during each song further contributing to a unique atmosphere. In This Moment clearly had a flare for the dramatic and it’s drawing much positive attention to them. With strong heavy, melodic, and catchy tracks In This Moment put on one of the most intense stage shows to this point in the day. 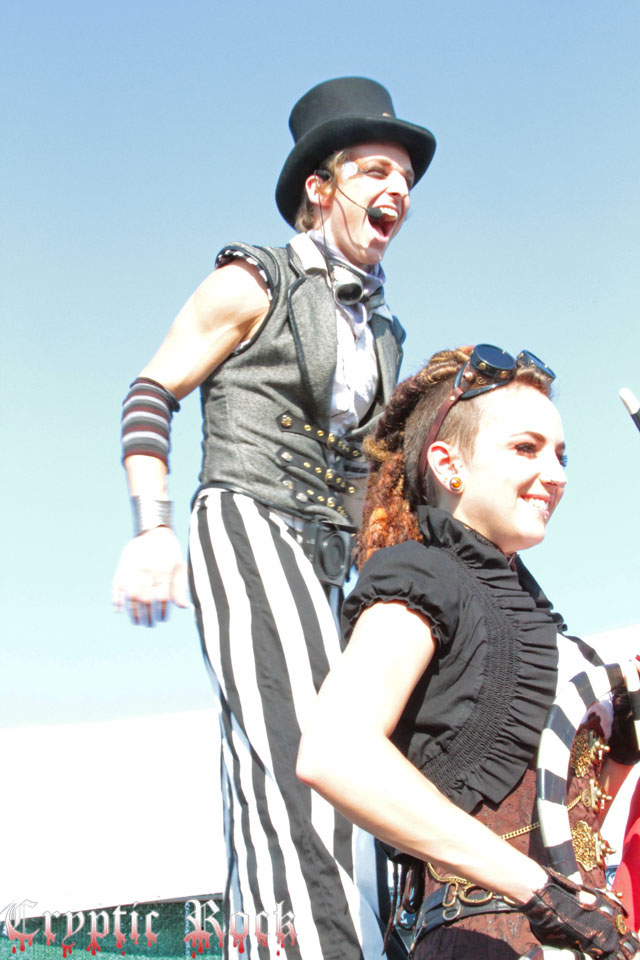 Skillet – With the sun set and crowd completely enthralled Skillet stormed onto the stage at 8 PM. Rocking hard for almost 2 decades now Skillet has risen to be one of the elite rock bands in today’s scene. Immediately getting the blood flowing the band opened their set with “Whispers In The Dark”. With each song thereafter they matched the intensity of the music with their performance. Vocalist John Cooper, completely zoned in on the performance, rocked the pavement hard belting out each song. Guitarist Korey Cooper ran, jumped, and slid up and down the stage for a spectacular performance. With live violin and cello players adding to the intensity Skillet put on one of the best and most intense performances of the day. There is no question they poured everything inside of them out on the stage. 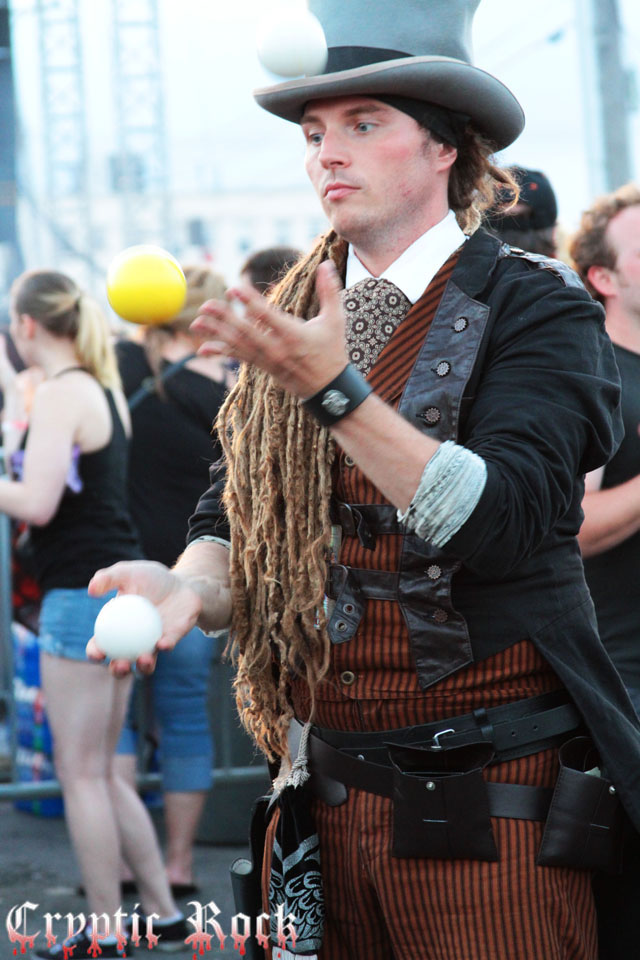 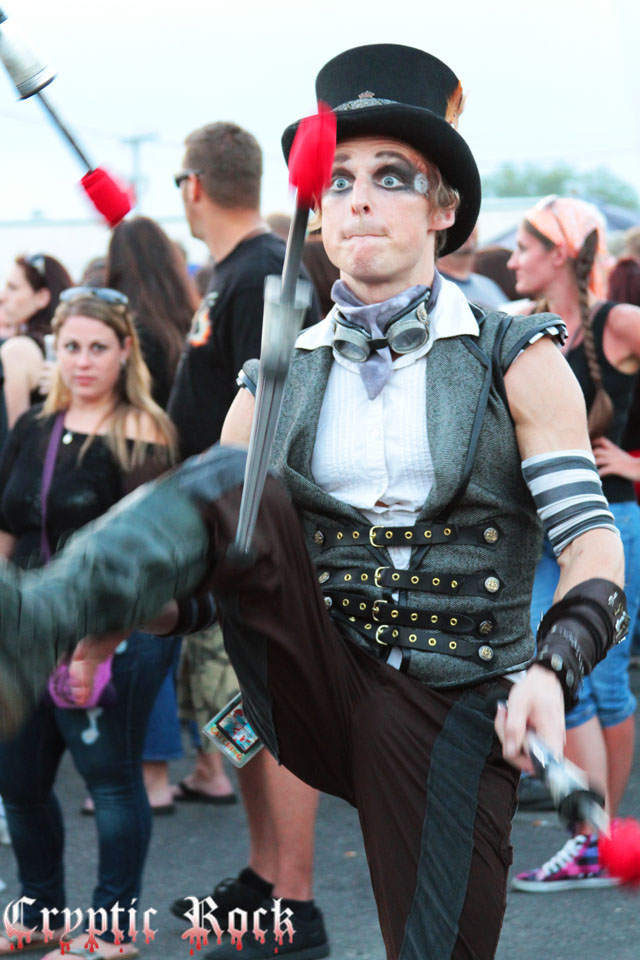 Shinedown – In the darkness of night highlighted by the moon and a breeze coming off the ocean fans were ready for the main attraction. With adrenaline high Shinedown hit the stage at 9:20 PM. With a excellent costume, the ring leader, Brent Smith’s vocal performance soared high. Pumped up for the occasion the band treated their fans to a powerful performance of all their hits and rocking tracks. Eric Bass, Zach Myers, and Barry Kerch matched Smith’s intensity with a tight performance. Smith as always grabbed the crowded attention with dialogue between each song relating to the human nature of all of us with his words. Sincerity is evident and passion is clear. The crowd roared throughout the set and was packed to the gills. Positivity filled air making Carnival Of Madness a special and fun event for all.

2013 proves to be one of the best Carnival Of Madness to date.  The day was filled with fun and rock n roll.  With fast turn over between sets the pace was smooth and kept the fans attention.  A pleasant day of different style rock bands.  We highly recommend you attend the Carnival Of Madness when it arrives near you. 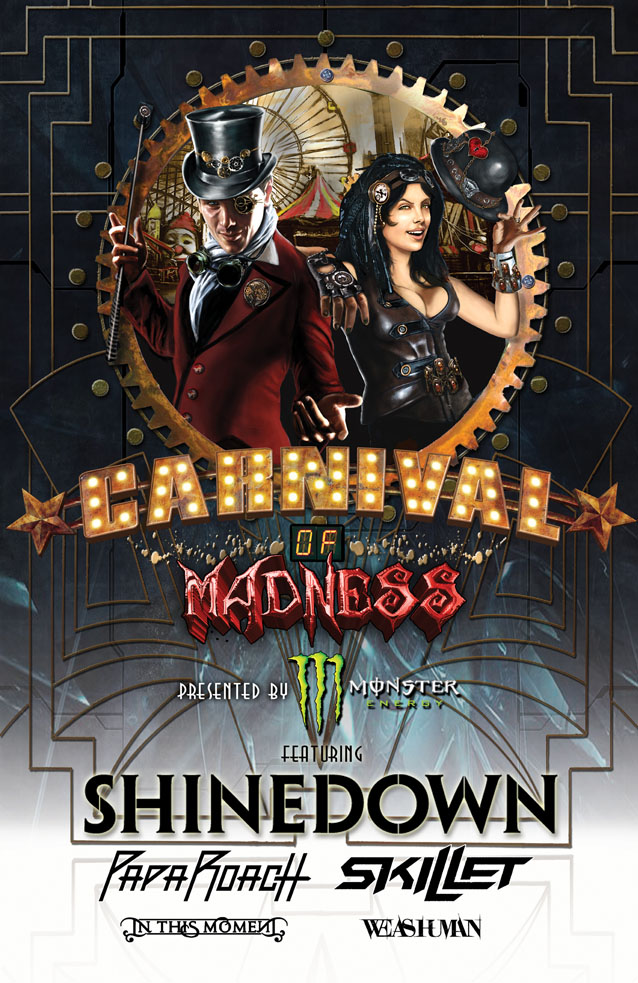