The roaring crowds, heavy fuel fumes, and sleek vehicles packed with more horsepower than the Mongol hordes, race back to the big screen with Walt Disney Pictures/Pixar Animation Studios’ Cars 3.

Released June 16, 2017, the third movie in the celebrated franchise sped to the top of the box office with approximately $53.6 million domestic take on its first weekend. With his directorial debut, Storyboard Artist Brain Fee brought Lightning McQueen, Tow Mater, and a whole crew of new and returning characters back for a new adventure. For those who do not know, Fee is a Disney and Pixar veteran who has worked with them since 1998’s Pocahontas 2: Journey to a New World. He also helped create the story of Cars 3 with an experienced group of A-list writers. In a maturing Pixar repertoire, and with four Cars mythos films before it, Fee and crew deliver the sequel the original 2006’s Cars deserves.

Aging race car Lightning McQueen, voiced by Owen Wilson (Zoolander 2001, Cars 2006), is comfortable winning familiar races and facing off with old friends and rivals. His season, and life, are upended when younger, tech-savvy racers enter the competition, led by pretentious Jackson Storm, voiced by Armie Hammer (The Lone Ranger 2013, The Man From U.N.C.L.E. 2015). Faced with the possible end of his racing career, McQueen confides in his long-time friends and decides to catch up with the times. Along with life coach Cruz Ramirez, voiced by Cristela Alonzo (Cristela series, The View series) and Doc Hudson’s aged mentor Smokey, voiced by Chris Cooper (American Beauty 1999, The Bourne Identity 2002), McQueen navigates a world that advanced beyond him, hoping to find the answers that will keep him relevant.

For those who remember, 2011’s Cars 2 developed into a completely different movie in genre, tone, and in many ways, mythos than Cars. It became a Spy, Action-Thriller Comedy that often struggled to find the heart and intimacy of the original. Mater became the vehicle that drove the film forward, when he had not been developed beyond the slapstick sidekick and friend. The whole ordeal felt like a forced effort that meant to cash in on the serious retail monies brought in by the franchise’s toys. Was it a disaster? No. It succeeded in bringing some clever visuals and depth to the world of Cars, but could easily have left McQueen and Mater out entirely. Again, it felt forced, and neither the story or characters advanced beyond anything presented in the original.

Cars 3’s success stems from Pixar returning to what they do best—presenting the continuation, or temporal nature of life. As in the real world, their characters advance through time, which presents new challenges and a process of maturation with which everyone relates. In real time, it has been 11 years since Pixar introduced us to the residents of Radiator Springs. Cars 3 embraces that change, and while it does not offer much development for the original gang, it showcases McQueen’s grief process of letting go of his youth. Fee parallels the story with how McQueen’s mentor, Doc Hudson (originally voiced by the late, iconic Paul Newman), went through the same process.

At the same time, the movie offers hope and promise with the new character of Cruz Ramirez. An efficient, great at her job coach, Ramirez starts the movie trying to train McQueen up from his traditional racing practices. Once the story progresses, she finds her life changing, despite thinking she had it all figured out. Her and McQueen’s play off each other is the catalyst for the best moments in the film.

Beyond the depth of story, Cars 3 offers everything Pixar and Disney are known for—visual splendor, great taste in music, and clever humor. The pace sometimes feels rushed, where a nuanced treatment could have made improvements on emotional impact. Story sometimes sacrifices character. But, of all these things, one of the most impressive to experience is the raw power of engineering. Great sound design immerses the viewer in the tactile experience, providing visceral stimulation when motors rev and explosions blast. Possibly the best example is when McQueen and Ramirez enter a demolition derby, where they face off with feisty derby bus Miss Fritter, fabulously voiced by Lea Delaria (Edge of Seventeen 1998, Orange Is The New Black series). If you miss the rising thrill of this sequence, you will probably miss the joy in the rest of the film.

Overall, Cars 3 is an amazing film and should be considered the truest sequel to the original. It checks all the right boxes for a character driven movie, even if imperfect in pacing and low screen time for favorite side characters. A visual bonanza, with a surprisingly touching narrative that echoes experiences from an audience of all ages, CrypticRock gives Cars 3 a solid 4 out of 5 stars. 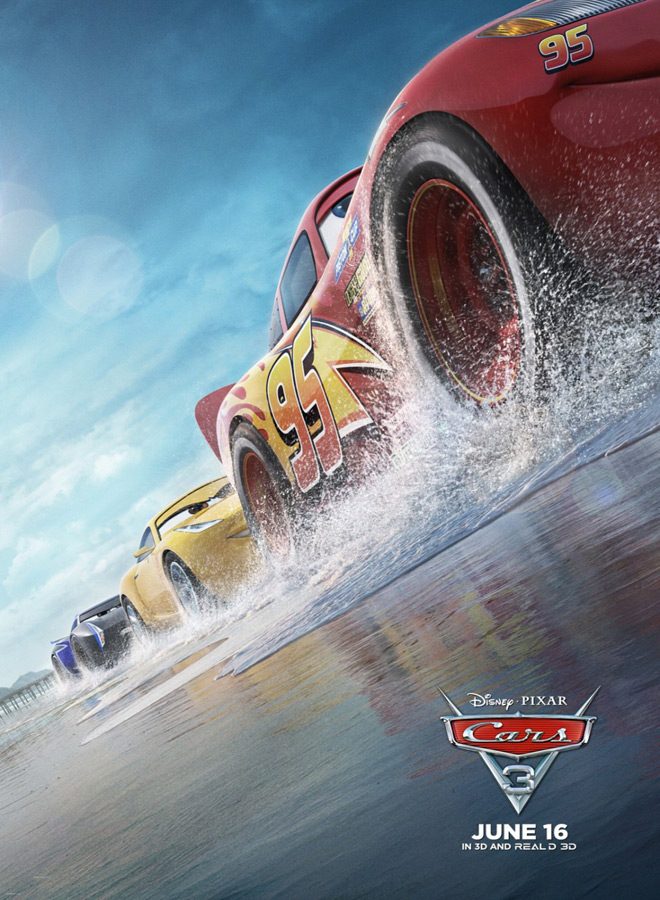