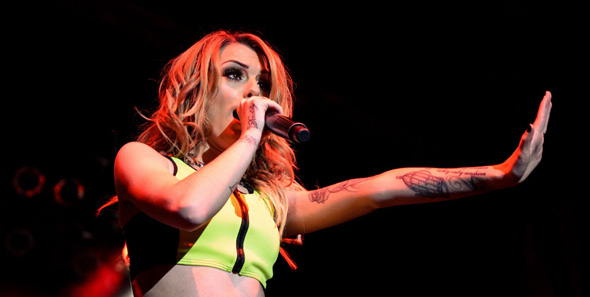 English singer-songwriter Cher Lloyd’s rise to popularity has been a steady climb since 2011 when, at age 18, her debut single “Swagger Jagger” was released.  The single was followed by the internationally chart peaking album Sticks + Stones (2011).  Three years later, Lloyd is a mature performer ready to make a statement with her forthcoming album Sorry I’m Late due out May 27th.  In support of the new material Lloyd began the I Wish Tour in September 2013 and continues on with the second leg of dates in 2014.  This marks the second headlining tour for the performer and comes with a massive buzz among her dedicated and newly acquired audience.  That tour stopped at Huntington, New York’s The Paramount on Sunday April 6th to play a packed room of enthusiastic fans.

Warming up the stage for Lloyd was New York based singer-songwriter Jackson Harris.  Influenced by some of modern music’s most pronounced artists, Jackson’s sound is a clear storytelling pop-rock style.  Having been a passionate music fan most of his life, he has taken that passion and found a talent for writing emotional catchy tunes that are fresh and fun to listen to.  Songs like “Gone In A Heartbeat”, “Go Crazy,” “Come Back Down To Earth” and newest single “Miss Me” had the audience immersed in the performance. With a strong backing band filled with energy and tight sound Harris showed he has the talents to make a big move in the world of pop rock. Check out his latest single “Miss Me” on iTunes.

Without further ado, it was time for Cher Lloyd to take the stage. Opening with “Swagger Jagger” was the perfect jolt to get this already excited crowd into overdrive. Lloyd full of energy moved about the stage continuously playing through tunes off her debut album including “Playa Boi”, “Superhero”, “Talkin That”, and “Oath”. Singing along with each song the audience made the show even more thrilling and there is no doubt Lloyd fed off the positive energy.

As the performance continued Lloyd offered a series of new songs including “Bind Your Love”, “Goodnight”, “Dirty Love”, “Sweet Despair”, “M.F.P.O.T.Y”, and “Just Be Mine”. Judging by the new material’s catchy alive sounds, it’s obvious Lloyd has grown as a writer and it will be exciting when the new album is released. Her ability to keep the show flowing at a fast pace was excellent and she had plenty of surprises to offer including and acoustic covers of Artic Monkey’s “Do I Wanna Know”, Sam Smith’s “Latch”, and mix of John Mayer’s “I Don’t Trust Myself (With Loving You)” / Soulja Boy’s “Turn My Swag On”.

Lloyd not only performed an array of her own songs as well as interesting covers, she also displayed a bright personality engaging the audience any chance she had to the delight of everyone. The evening came to an exciting close with three hit singles in row; “I Wish”, “With Ur Love”, and “Want U Back”.

For an performer as young as Lloyd, she has really blossomed into an artist which can go far in the world of music. Her performance provided plenty of diversity and entertainment to keep both young and mature audiences interested. Keep your eyes open for the I Wish Tour when it comes to rock a city near you now through May.