Possessed dolls with homicidal tendencies originated with movies such as 1929’s The Great Gabbo and continued in 1988’s Child’s Play’s.  After the massive success of Child’s Play, it seemed that a sequel was inevitable. Child’s Play 2  was released on Friday November 9, 1990 and is celebrating its 25th anniversary. The movie was directed by John Lafia (Blue Iguana 1988, Man’s Best Friend 1993) and produced by David Kirschner (Rose Petal Place 1984, The Curse of Chucky 2013) from a script by creator Don Mancini (Cellar Dweller 1988 as Kit Du Bois). The cinematography was done by Stefan Czapsky (The Thin Blue Line 1988, Max 2015) and the impressive puppeteering was handled by Kevin Yagher (Child’s Play 3 1991, The Astronaut’s Wife 1999). 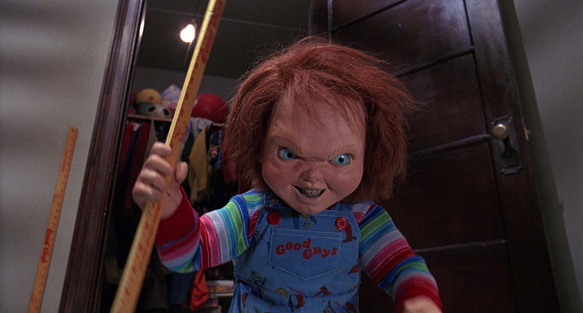 Actor Alex Vincent returns as young Andy as he is placed in a foster home with The Simpson family. Joanne Simpson was played by Jenny Agutter, who Horror fans may recognize from An American Werewolf in London (1981) and The Twilight Zone (1986-1987). Husband Phil Simpson was portrayed by Gerrit Graham, who had roles in Horror cult movies Chopping Mall (1986) and C.H.U.D. II – Bud the Chud (1989). Actress Christine Elise made her film debut as Kyle, the spunky teen and fellow foster child living with the family. Since her role in Child’s Play 2, Elise has had a successful career primarily in television shows and made for television movies, although other film credits include Body Snatchers (1993) and Prom (2011). Serial killer Chucky was again voiced by the incredibly talented Brad Dourif,  who has won both a Golden Globe Award and BAFTA Award, as well as nominated for an Academy Award, for his role of  Billy Bibbit in One Flew Over the Cuckoo’s Nest (1975). Dourif is well-known for many other films, including The Lord of the Rings: The Return of the King (2003) and Dune (1984).

United Artists, who released the first Child’s Play was set to produce Child’s Play 2 with the late Wes Craven (Last House on the Left 1972, A Nightmare on Elm Street 1984) at the helm. The company, however, had financial issues and executive turnovers that resulted in the canceling of many films. After shopping the property to other studios, Kirschner produced the movie himself, but with Lafia in the director’s chair, and found distribution with Universal Pictures. 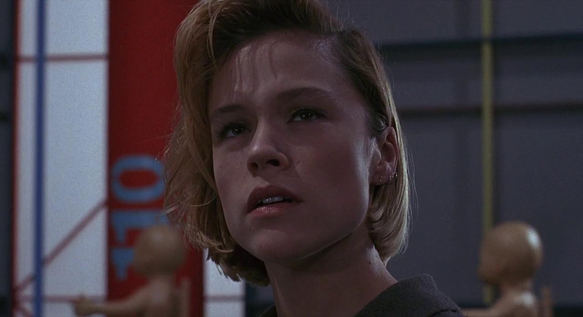 The budget for Child’s Play 2 was $13 million and the film grossed over $28 million and was number one in the box office during opening weekend. Perhaps surprising to the audience, the sequel features over-the-top kills and a comedic tone that is much different from the first movie. One of the most memorable scenes is Chucky stabbing a teacher, played by Beth Grant (Coach 1989-1993, Donnie Darko 2001), and then beating her with a yard stick. This film is where Chucky begins to develop his classically morbid, yet humorous, personality fans have come to love. 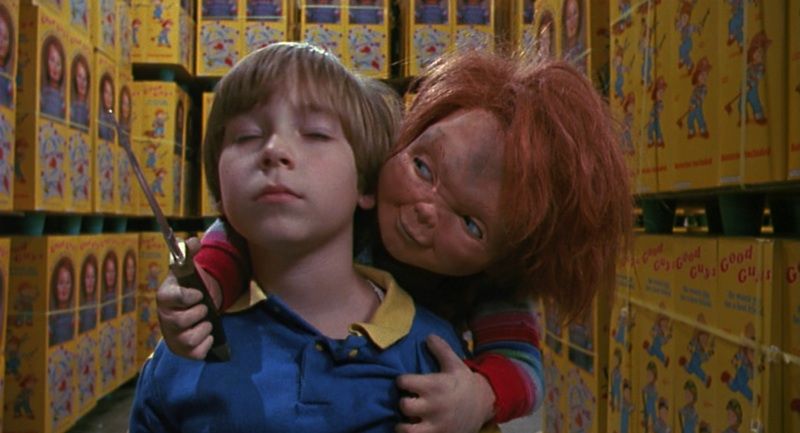 In addition to merchandise hitting store shelves, author  Matthew J. Costello wrote a novelization of the film that includes additional details and story line. Child’s Play 2 has either been referenced, paid homage, or spoofed in many mediums over the years. Thanks to the success of the first two Child’s Play films, the series has spawned four more sequels, which are Child’s Play 3 (1991), Bride of Chucky (1998), Seed of Chucky (2004) and Curse of Chucky (2013). There is yet another film planned for release in the ear future. Although the his mission has remained the same and victims have piled up over the years, it is obvious that Child’s Play 2 was fundamental in setting the tone that works so well. 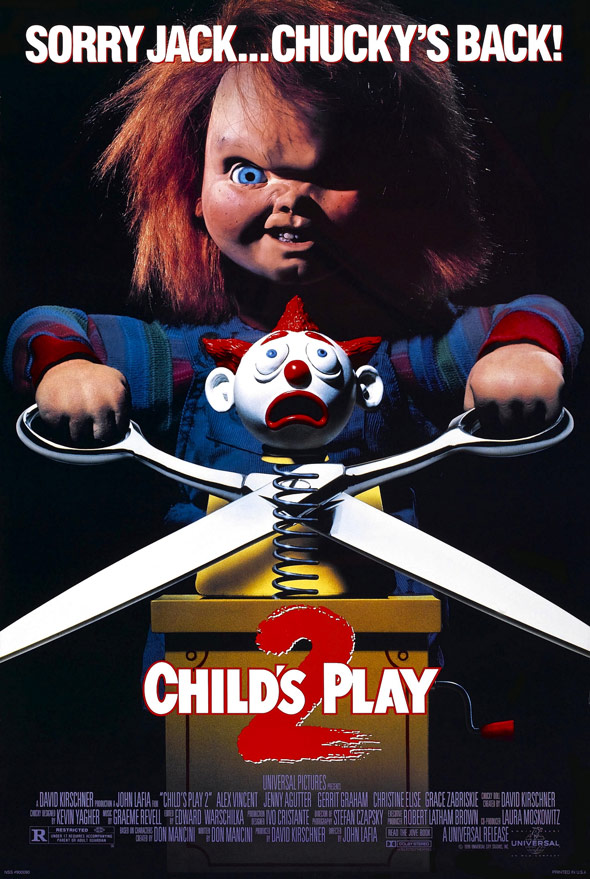