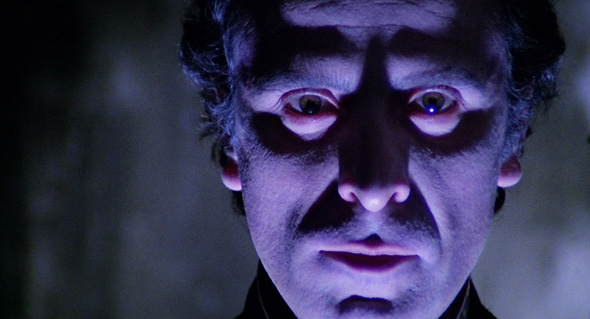 Loosely inspired by the writings of the aforementioned H.P. Lovecraft, City of the Living Dead takes place in the town of Dunwich, which was built over the ruins of the original Salem, the home of Witches and heresy. A pale and somber Father Thomas (Jovine) is slowly walking through a foggy cemetery. He stops in front of a tree and looks up. The location is switched to New York as a group of people, including Mary Woodhouse (MacColl), are conducting a seance, in which they watch Father Thomas’ every move. Suddenly, a noose is thrown over a tree branch, and Mary witnesses Father Thomas hanging himself. This heinous act throws open the gates of hell and the dead begin to rise from their graves. All of a sudden, Mary screams and falls on the floor, convulsing in terror, and ultimately dies of fright.

After Mary’s body is taken away, the police are investigating the crime scene. Sgt. Clay (Martin Sorrentino: The New York Ripper 1982, Trenchcoat 1983) is convinced, based on the story he just heard, that the entire group was on drugs or it is an elaborate prank. As he is harassing one of the members, Theresa (Adelaide Aste: Memoria 1994, Passage to Paradise 1998) stops and insults him. Then she proceeds to tell him that all of this was prophesied in the book of Enoch, a 4,000 year old tome speaking of all the evil things to come. All of a sudden, a column of flames rises from the floor, but even that does not convince the Sergeant.

A bit later, Peter Bell (George), a newspaper reporter, tries to get into the house where Mary died, but is denied access. Meanwhile, back in Dunwich, Bob (Giovanni Lombardo Radice: Cannibal Apocalypse 1980, House on the Edge of the Park 1980), a local deviant goes into an abandoned house he uses as a hideout, and discovers a decaying baby. Ever since Father Thomas hung himself, strange things have been happening all over town, people disappearing, things breaking, but it is all chalked up to rumors.

Gerry (de Mejo), a psychologist, is in the middle of a session with his patient, Sandra (Janet Agren: Panic 1982, Red Sonja 1985), when his gorgeous girlfriend, Emily (Antonella Interlenghi: Giant of the 20th Century 1977, Mother 1990) interrupts to break their date in favor of seeing Bob. Emily is the only person in town who feels any empathy towards Bob. 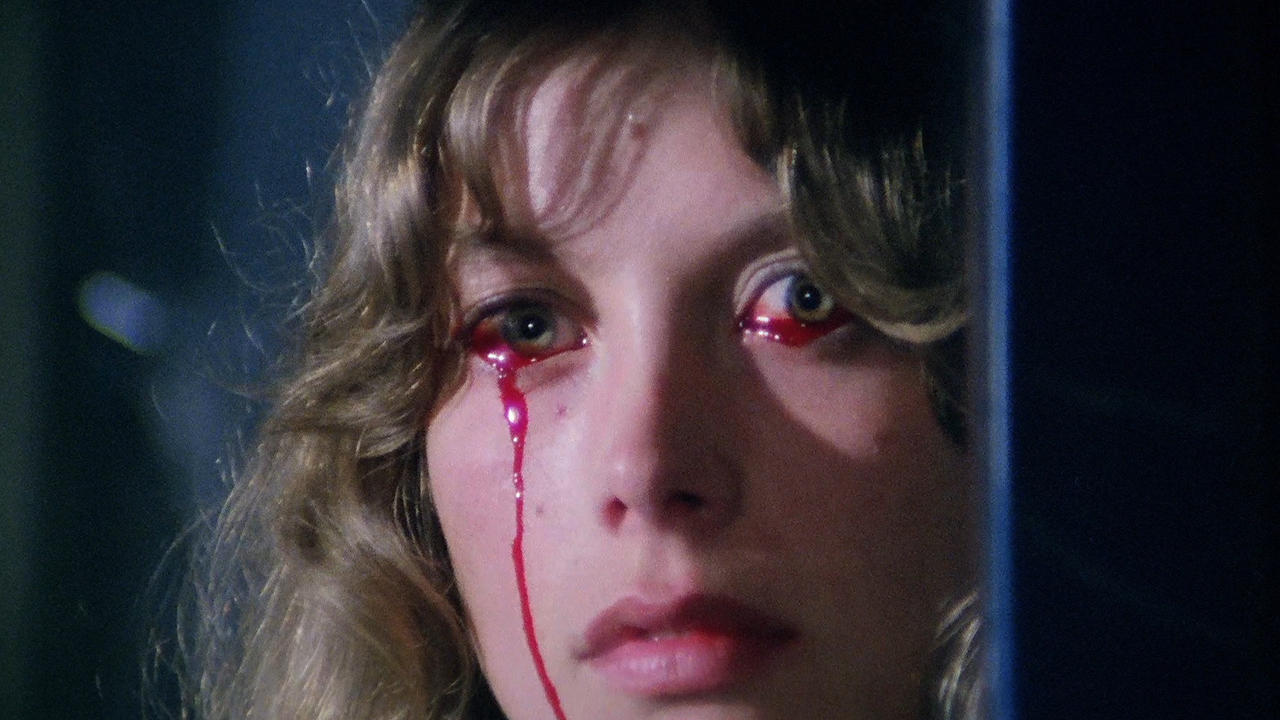 Back in New York, Peter is walking around the cemetery where Mary is to be buried and comes across two Slacker Gravediggers, who hassle Peter about him staring at them. He walks over to Mary’s coffin and starts scribbling in his notepad. The Gravediggers come over and hassle him again when he tries to get some information from them. They put the coffin in the ground, only cover it with a little bit of dirt, and climb out, citing “union hours” and leave. Unbeknownst to them, Mary wakes up and screams just as Peter is almost out of earshot. He runs back over, grabs a pick ax and cuts into the coffin, narrowly missing Mary’s face. After she is free, she and Peter go back to Theresa’s apartment and give him the whole story. Theresa warns that the gates of hell have been opened, and that they must close the gates before midnight on “All Saints Day” or demons would run loose on the world. Peter and Mary set off on their journey to Dunwich, where hell is already among the helpless citizens.

Fulci is regarded by many critics, and even some of the most jaded Horror fans, as a hack, or rip-off artist. While it is true that he directed Zombie 2: The Dead are Among Us (1979) solely to cash in on the success of George Romero’s Dawn of the Dead (1978), which was entitled Zombi in Europe, Fulci had one of the most unique voices in the genre; even though his stories were simple and maybe even a little clunky or nonsensical, his directorial prowess and eye for gory special effects made up for a less than stellar script. Full disclosure- the average Fulci fan is not watching a Fulci film for its immaculate, Shakespearean screenplay: It’is all about the gore, and although at the time, Fulci was upset about not having the kind of success he had hoped for, but later in life, he got to see how his films were survived and appreciated by legions of fans.

City of the Living Dead was shot in America and Europe; the bulk of the exteriors were shot in and around Savannah, GA, which was chosen for its architectural beauty. Because it was a little too picturesque for a Horror film, Fulci came up with the idea to shoot all of the day scenes in a veritable dust storm and all of the night scenes in a dense fog to give the locations a palpable eeriness. All of the interior sets were built and shot at the Teatro 7 studios in Rome, Italy, and were very convincing. The underground set, in particular, was creepy as hell with all of the skeletons hanging from the ceiling; surely they were falling out of the bottom of rotted coffins, but they also looked like they tried to crawl out because, they were buried alive. The second part to that set, the open room with the colored windows on the ceiling, was equally as frightening due to it being so out of place. 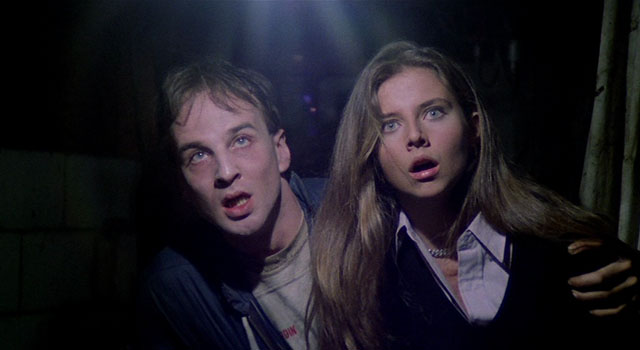 Fulci was well known for not getting along with his cast due to his penchant for yelling and throwing tantrums. With City of the Living Dead being Catriona MacColl’s first Fulci film, she was quite skeptical about working with him based on that reputation. She also was not too enthused about the script, but like most young actors, she needed the money and agreed to do the film anyway. This turned out to be a boon for her career, as she and Lucio formed a great working relationship, which led to starring roles in two of his most well-known films. This was mostly because, she took the films seriously, which some of the actors did not quite do. MacColl is a great actress who has a taste and respect for Horror, and an amazing scream.

Actor Christopher George was also outstanding in City of the Living Dead, bringing a bit of sarcastic humor to his character, and almost always gave a sly smile when doing so. Unlike Catriona, though, Christopher and Lucio butted heads. Carlo De Mejo’s Gerry is on the other end of the spectrum from Mary and Peter: he is a small town psychologist, who is very grounded in reality, then all hell breaks loose, turning his world upside down. Janet Agren plays the part of a woman suffering from a pet neurosis, but after a brief freakout, she adapts and stays tough until her end. Father Thomas was masterfully played by Fabrizio Jovine. He had no lines whatsoever, he just had to look creepy, which he pulled off brilliantly.

The meat and potatoes of any Fulci film are the special effects, and City of the Living Dead delivers the gore in rivers. Two of the best sequences are the “gut-vomiting” sequence and the “head-drill” sequence. The “gut-vomiting” sequence is exquisitely nauseating. Daniela Doria (The Black Cat  1981, House By the Cemetery 1981) is parked with Michele Soavi (Stage Fright 1987, The Church 1989). Father Thomas appears as a hanging apparition and her eyes start to bleed via the tiniest tubes masked under her eyelids, and she begins to vomit up her own intestines. To accomplish this, she actually put tripe in her mouth and slowly spits it out. The closeups were of a completely obvious fake head belching up actual sheep guts, from a sheep killed virtually moments before the scene began so they would not reek.

The drill press death is one of the most convincing effects in all of Horror. Bob (Radice) is caught hiding out with Mr. Ross’s (Venantino Venantini: Black Emanuelle 1975, Cannibal Apocalypse 1980) daughter in the garage. Convinced that Bob is responsible for all the death that is going on, Mr. Ross takes matters into his own hands, and after a little roughing up, pushes Bob’s head slowly into the drill press. This effect is truly a work of genius by De Rossi and Rufini, as the drill bit is a collapsible rod tipped with a silicon head and a blood tube, so Radice’s actual head could be used. A fake head was used for the closeups of the drill going in and coming out the other side. All these elements coupled with masterful editing by Vincenzo Tomassi (Zombie 1979, Cannibal Holocaust 1981), really breathes life into the effect. 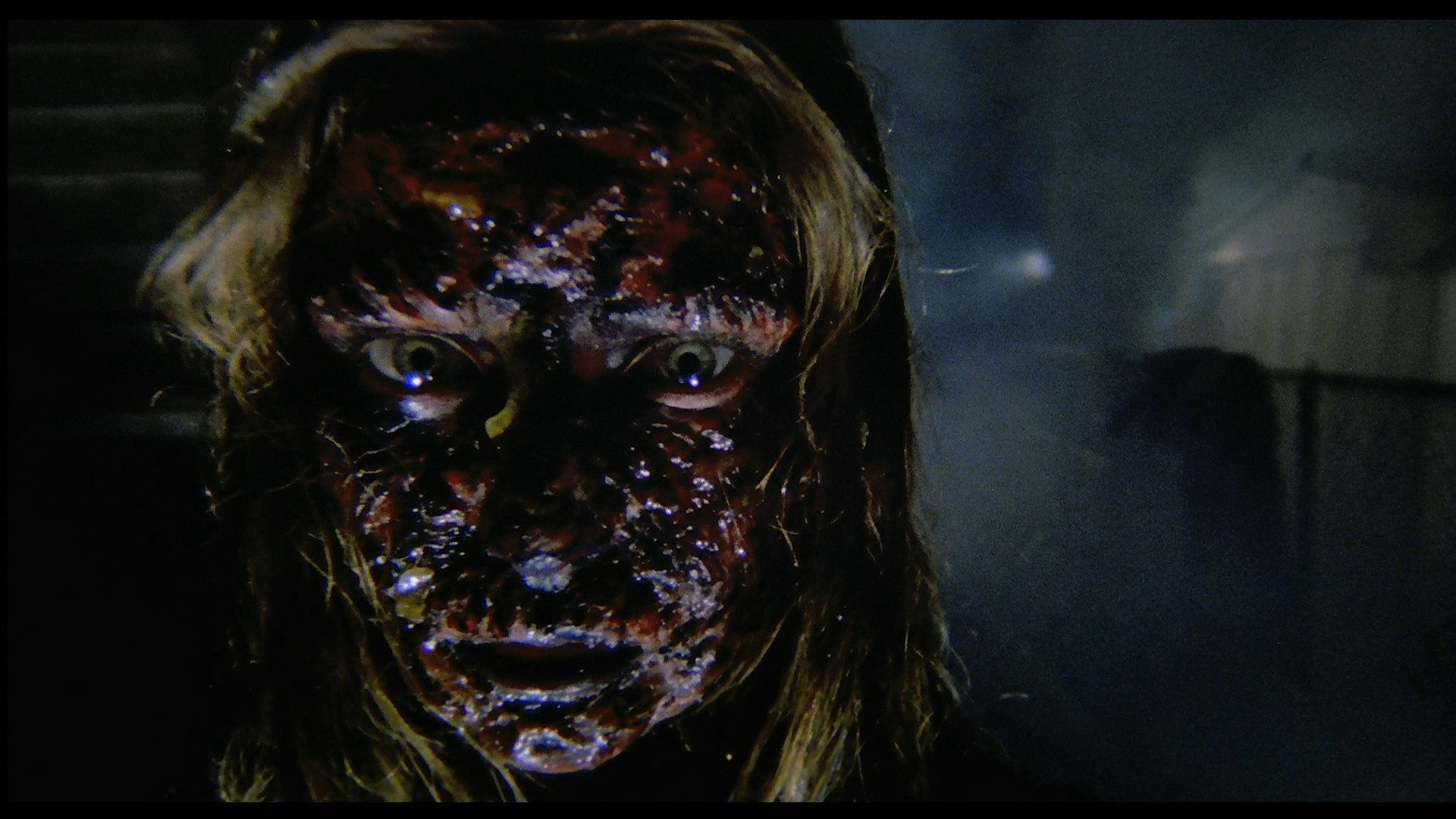 Although City of the Living Dead is considered a “Zombie movie,” the Zombies are portrayed much differently than conventional Zombies. They are not just on the prowl for brains and flesh: they are recruiting for Father Thomas. The Zombies are also able to teleport at will and have the same psychic powers as Father Thomas. Different lighting effects were used on these Zombies, as they were lit from the bottom giving them a much different effect than conventional Zombies. This is where Antonella Interlenghi’s Emily shines. While her eyes were beautiful when she was alive, they are completely evil while she is a zombie, and in the extreme closeup scene when she is walking towards John-John, she could make the viewer’s blood run just a little cold.

Over the years, there have been many questions about the ending of City of the Living Dead, in which Mary and Gerry climb out of the crypt to see John-John (Venantini) running at them for a seemingly happy ending, but as he approaches, there is the sound of thunder and a still dense fog; Mary starts screaming and John-John goes into slow motion until the screen crumbles away to black. The only theory that makes sense is that the gate to hell was not closed because Father Thomas was not stopped in time and the darkness of hell consumes reality, hence the crumbling animation. Even after thirty-five years after the initial release, City of the Living Dead still manages to be one of Fulci’s most regarded popular films, and the effects remain as shocking and grotesque as they were the day it was released. 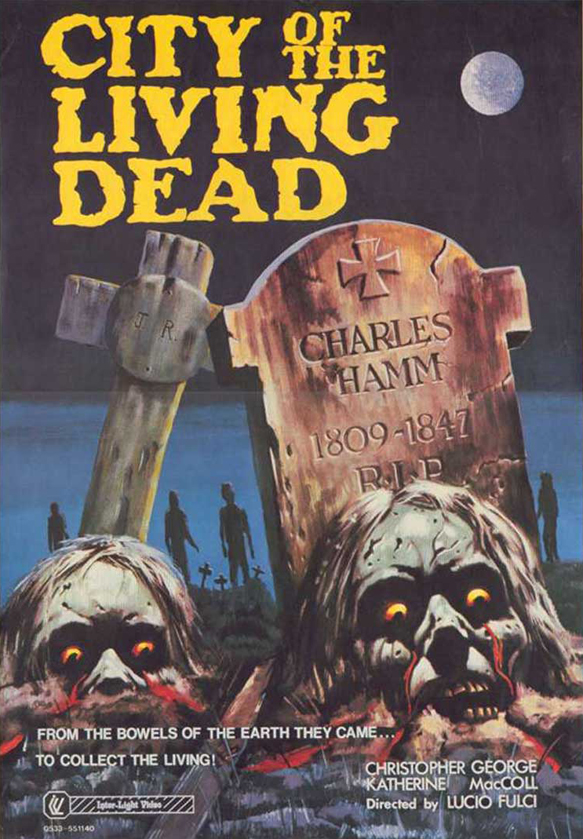