Not since Tim Curry starred as Pennywise in Stephen King’s It in 1990 has a clown frightened and delighted Horror fans until the recent film titled Clown by producer Eli Roth (Cabin Fever 2002, Hostel 2005). Released by Cross Creek Pictures and Vertebra Films, the film has seen release in Italy as of 2014 and in the UK in early 2015, but a US release date has not been announced yet. Filmed in Ottawa Canada, Clown was written by Christopher D. Ford (Robot & Frank 2012, Cop Car 2015) and Jon Watts (Eugene 2014, Cop Car 2015), who also directed, and is a real treat from Horror legend Roth, who also stars in the film as Frowny the Clown. 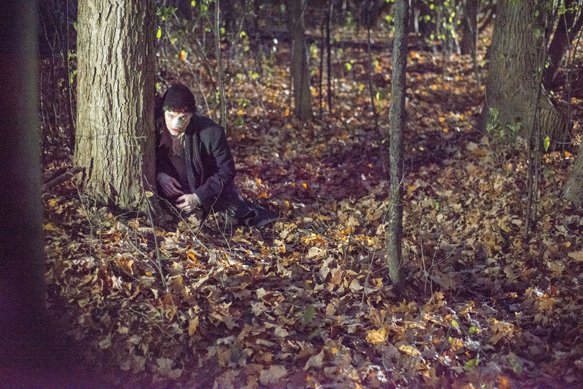 Set in present day, Clown focuses on the story of Real Estate Agent and loving father Kent (Andy Powers: Oz 1997, In Her Shoes 2005) and his doctor wife Meg (Laura Allen: Mona Lisa Smile 2008, Ravenswood series). It is their son Jack’s (Christian Distefano: Creative Galaxy 2013-2014, The Strain 2015) seventh birthday, and he has an obsession with clowns. Meg had booked a clown to appear at his party but they were unable to attend. Kent is in the basement of an open house he is getting ready for sale when he hears the news. Looking around him, he sees an old wooden chest; inside is an old clown costume. Kent excitedly puts it on, happy to be able to surprise Jack, and he is a hit at the party. After everyone leaves, he puts Jack to bed, still dressed as a clown and then sits on the couch to relax. He accidentally falls asleep and wakes up late to take Jack to school, unfortunately having to stay dressed as a clown. While Jack loves it, Kent begins feeling uncomfortable and, once at home, tries to get out of the costume, but cannot. He washes the makeup off but the wig will not come off, the nose will not move, and neither will the costume. 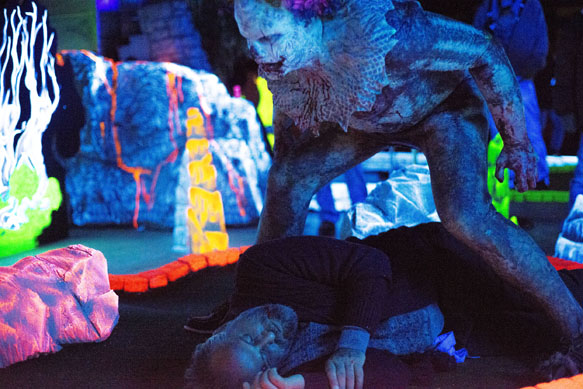 A difficult day ensues and Kent is left red-faced and red-nosed as he goes about his daily business in a clown suit. Each time he attempts to remove it, he cannot, no matter what he tries. By the second day, he is still stuck as a clown, but now other weird things are happening. He is ravenously hungry all the time, his facial features and feet are changing, and he has a short temper. Frustrated, Kent calls an owner of old clown costumes, Bert Karlsson (Peter Stromare: Fargo 1996, Arrow 2014-2015), and discovers that the owner of the house Kent is selling passed away and is Bert’s brother. When Burt finds out Kent is wearing the costume, he acts very strangely and arranges to meet Kent right away at the warehouse. Kent meets Bert, relieved to find a way to take the clown suit off, but shortly into their meeting it takes a violent and bizarre turn. Is it a costume or something much more insidious? 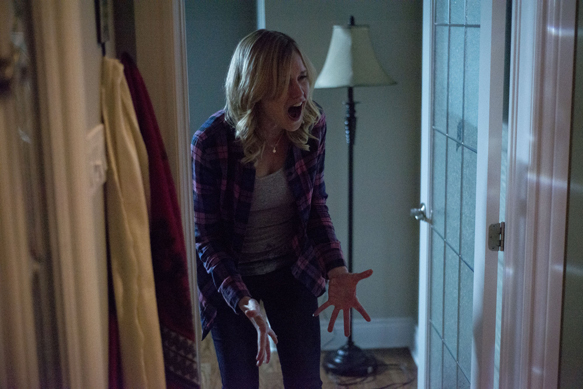 Interestingly, Roth produced Clown on the basis of a faux movie trailer released on the Internet using his name, and felt the guys that did it deserved a shot. This film is the spectacular result of that. The cinematography by Matthew Santo (Merry Christmas 2013, Super Sleuths 2014) is well focused, and adapts to each scene. The special effects are magnificently done with plenty of blood and gore, and even brightly speckled clown blood. Dark humor is sprinkled heavily throughout the film, which helps give the storyline depth and makes digesting the more gruesome scenes easier. Clown is well thought-out with an excellent backstory and characters that portray intensity that adapt to change quickly. The film will most certainly reignite xenophobia in viewers with even a slight fear of clowns. With lots of twists and turns, it is a must watch for all Horror fans. While clowns are a central fear for some, not many films execute bringing that fear to life quite as well as Roth’s newest film, that is absolutely worth waiting for. CrypticRock gives Clown 5 out of 5 stars. 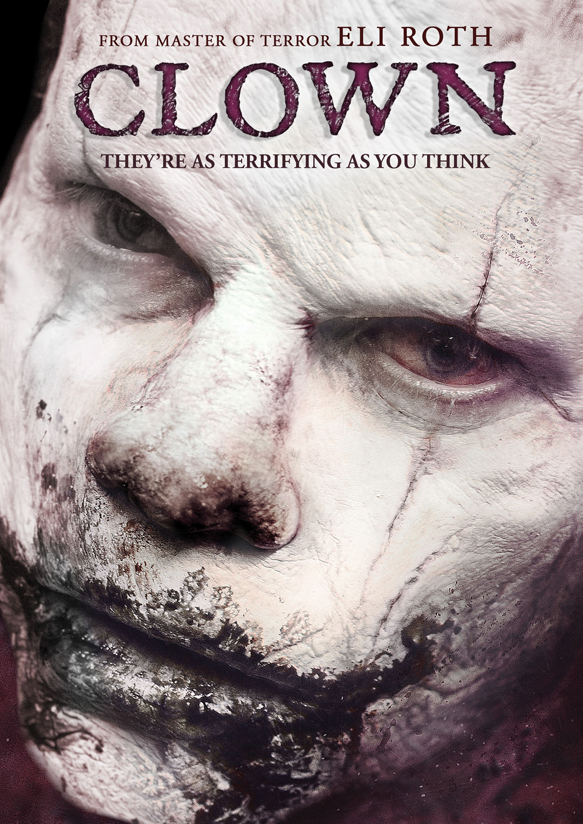