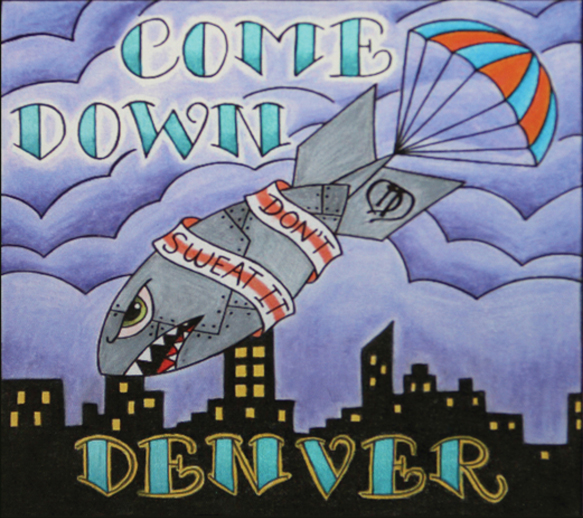 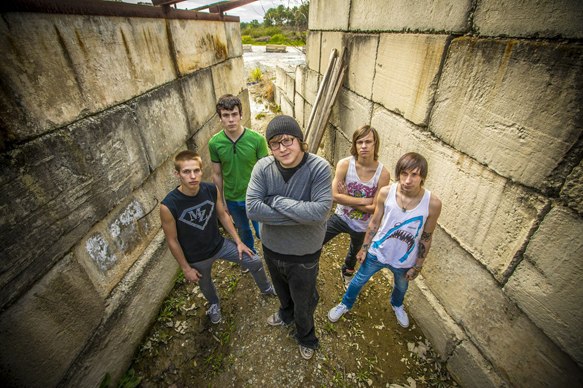 Christian Camp (vocals), Billy Metcalfe (guitar/vocals), Travis Blake (guitar/vocals), Casey Buice (bass/cello), and Allen Beck (drums) are individually talented musicians; collectively they are the up and coming pop/punk sensation Come Down Denver. A self-made success formed in Villa Rica, Georgia, this group of five has been able to create a sound that mixes catchy vocals, compelling lyrics, and strong hard-hitting instrumentals. Comparable to the sounds of bands like Mayday Parade and Every Avenue; Come Down Denver is upbeat, relatable, and just getting started. Their recently released debut album, Don’t Sweat It, is a perfect representation of their passion for punk and incredible talent.

The band opens this album up with a track entitled “I’m Sorry”. What begins sounding like an acoustic song quickly evolves into a steady punk sound with the introduction of Beck on drums. Come Down Denver really showcases their vocal abilities here as multiple harmonies are featured. The lyricism is witty and on-point as the track compares a love story gone wrong to actors performing a script; “You’re an actress performing, / but nobody warned me that you were the lead./ You had a script, audience, / and the way that it ends before you met me”.

Following this is another single-worthy track, “Don’t Call It Crying”. The most prominent sound of this song, besides Camp’s powerful vocals, is the intense guitar breakdowns. The harsh instrumentals are symbolic of the dark nature of the song, which is heartbreak. Thus, aside from just sounding great, Come Down Denver is able to show their sensitive side and connect with fans on a whole other level by stripping down a little.

In case you weren’t already impressed enough by the vocals of this band, “File Hazard” is a completely acoustic track. This again, shows us the more vulnerable side of Come Down Denver all the while putting emphasis on the vocal ability of Camp and the other band members.

The pace of Don’t Sweat It doesn’t stay quiet for long. “Down Like The Others” brings back the punk sound and the upbeat musicality. It’s one of the catchier songs on the album and features a brief scream-o segment, which only adds another interesting element to the already memorable track. “Colorado Springs” is another pop/punk favorite from the debut album. Here the audience really gets to hear the talents of Metcalfe and Blake as the guitar chords are so intricate and powerful.

“I Went Para Sailin’ with Sarah Palin” is arguably the best track off of Don’t Sweat It. It’s the perfect median between pop and punk and by far the catchiest song thus far. The track is pretty upbeat all the way through until the broken down bridge towards the end where Camp sings the powerful line: “I refuse to spend my whole life wondering what it feels like to be alive”.

The song, “Sightseer (You Should’ve Seen This Coming)”, is aptly placed last on the track list. It’s a song that sticks with the listener and it’s hard to be forgotten. It features heavy bass lines by Buice and the hard-hitting sound really draws the listener in and keeps them in place all the way through to the end of the track. It’s ironic because the band sings the line, “But that’s okay because I can forgive you but you can’t forget me. No you can’t forget me”. These lyrics couldn’t be truer for anyone listening because as the album comes to a close, it is quickly realized that this is one band you won’t forget anytime soon.

Come Down Denver has only started and they are just beginning to touch the surface of this industry. It’s hard to believe Don’t Sweat It is the first release from this band because the five talented members seem so advanced already. Each track truly brings something new to the listener. It’s also evident that each band member really has their own moment to shine throughout the tracks and this definitely diversifies the album when looking at it as a whole. CrypticRock gives Don’t Sweat It 5 out of 5 stars. After only one release, we’re hooked and can’t wait to see where Come Down Denver goes from here!