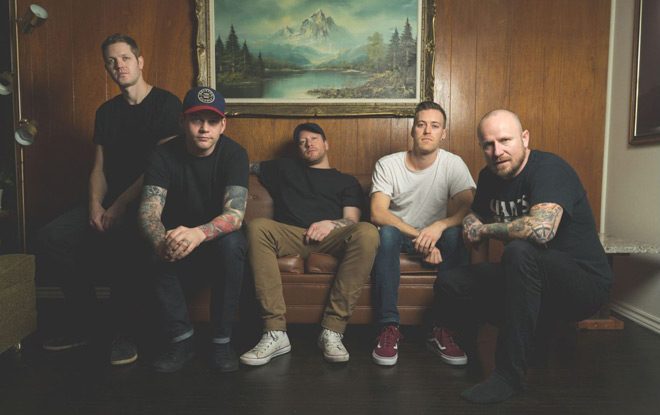 Melodic Hardcore outfit Comeback Kid hail from Canada, where they formed in 2000. Initially intended to be a side project, the quintet would release their debut, Turn It Around, in 2003. After the release of 2005’s Wake the Dead, the departure of original Vocalist Scott Wade would see a lineup shift, with then-guitarist Andrew Neufeld moving to the vacated frontman slot. Three albums would follow – 2007’s Broadcasting…, 2010’s Symptoms + Cures, and 2014’s Die Knowing – along with a live CD/DVD, Through the Noise, in 2008. Extensive touring and a die-hard fan-base have kept Comeback Kid alive for the past seventeen years and counting!

Now Comeback Kid – Vocalist Andrew Neufeld, Guitarists Jeremy Hiebert and Stu Ross, Bassist Ron Friesen, and Drummer Loren Legare – are poised to present their sixth studio release, Outsider, which arrived on September 8th thanks to Nuclear Blast Records (and New Damage Records in Canada). The thirteen-track collection merges frenetic, blistering hardcore staples with deliciously infectious melodies, always with a mega-watt punch of energy and enthusiasm for the band’s craft. “We’re a hardcore band, but we don’t feel like we belong to any particular sect of that,” stated Neufeld. “We don’t want to be limited in any sense, and prefer to work on our own terms.”

Album namesake “Outsider” opens the album with a brash, attention-grabbing moment, leading into the mosh-pit anthem “Surrender Control.” Split between jackhammering, vicious attacks on its verses and melodic choruses that are lush and infectious, this is one of the album’s brightest moments. Fellow Canadian Devin Townsend (formerly of Strapping Young Lad) makes an appearance on the heavy and brooding first single, “Absolute;” another of the album’s highs.

“I guess you’re a little naïve but you’re setting an example / You crossed a hell of a scene and I hate to see you do it all again,” Neufeld sings in the aptly-titled “Hell Of A Scene,” where frenetic verses lead to sing-along worthy, Punk choruses. This formula continues on the superb “Somewhere, Somehow,” leading into “Consumed The Vision;” Melodic Hardcore at its finest, which features another Canadian musician and friend, Chris Cresswell (of The Flatliners).

The vicious attack of “I’ll Be That,” pummeling “Outrage (Fresh Face, Stale Cause),” and equally crushing “Blindspot” follow. The slaughtering pace of “Livid, I’m Prime” will make for some serious energy when performed live, while melody makes her delicious return on “Recover.” Going out with a chaotic, frantic, and vicious bang, Comeback Kid present the ridiculously infectious heat of “Throw That Stone.” Capping the entire album off with lucky number thirteen, “Moment In Time” – featuring Northcote (Canadian musician Matthew Daniel Goud) – full of catchy choruses, dark vibes, and the gang chant of “Help me, help you!”

Comeback Kid oft blend vicious, thrashing strength with delicious melody, creating a sound that is in-your-face and high energy at all times. It’s no secret why this band are known for their amazingly energetic live shows, a fact that shines through in the music on Outsider. From start to finish, there is not a moment’s hesitation, not a single note of filler. Outsider stands as a testament to a lengthy career from a band who are proving that Hardcore – melodic and otherwise – is very much a vital, sonic force in 2017. For these reasons, CrypticRock give Comeback Kid’s Outsider 4 of 5 stars. 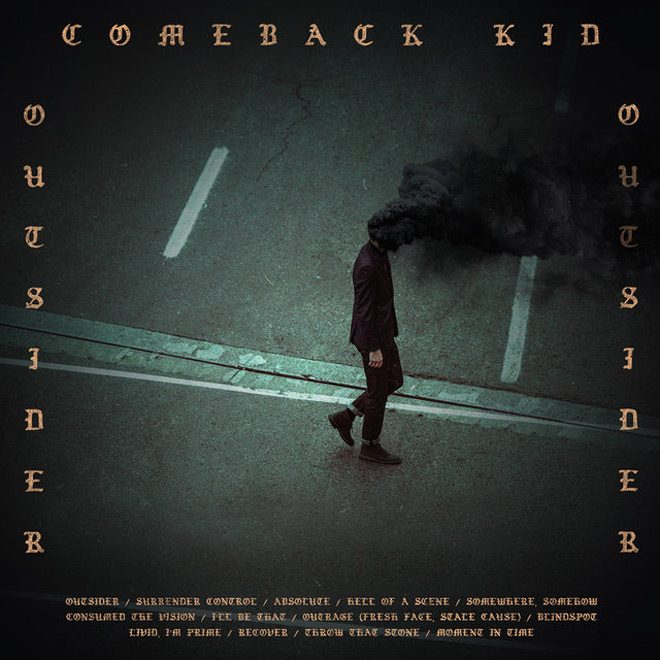