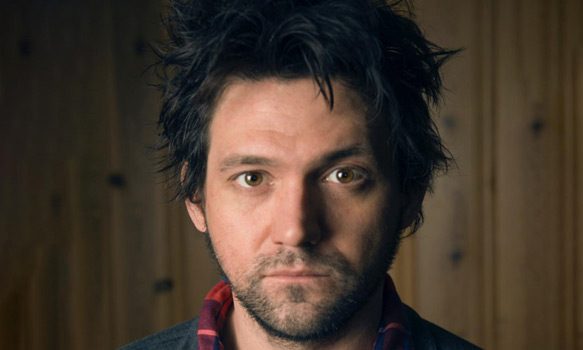 Those who are fans of Conor Oberst with eyes bright for some fantastic new music, prepare for Salutations, the companion album to 2016’s critically-acclaimed Ruminations, due out Friday, March 17, 2017 via Nonesuch Records.

The talented singer-songwriter hails from Omaha, Nebraska, and is probably best known for his band Bright Eyes. Previous to this project, Oberst had self-released an album (at the confounding age of thirteen, no less!), as well as performing with the eclectic bands Commander Venus, The Faint (originally known as Norman Bailer), The Magnetas, and Park Ave.

His work with Bright Eyes earned Oberst many accolades, including repeated “Best of” mentions in Rolling Stone magazine. Sadly, in February 2011 – after sixteen years performing as Bright Eyes – Oberst released his final record with the project. A multi-talented, multi-instrumentalist, Oberst would go on to perform with a bevy of bands, including Desaparecidos, Conor Oberst and the Mystic Valley Band, and Monsters of Folk.

Besides being an accomplished musician, Oberst is an entrepreneur who has co-founded not one, but two independent record labels: Saddle Creek Records and Team Love. Through his behind-the-scenes work, Oberst has released albums from artists ranging from Cursive, Rilo Kiley, and Azure Ray to Tilly and the Wall, Willy Mason, David Dondero, Taylor Hollingsworth, and Jenny Lewis’ solo album with The Watson Twins. Additionally, Oberst co-owns Pageturners Lounge, in his hometown of Omaha, Nebraska. This is not a man who is resting on his musical merits alone!

What fans must know about Salutations is fairly simple: this is a rearranging of the earlier Ruminations, but with an additional seven new tracks mixed in. Ruminations was, in fact, a true solo effort, with Oberst performing all vocals and instrumentation throughout the album. Four months after its release, Oberst is back with a little help from some immensely talented friends – New York’s The Felice Brothers and Drummer Jim Keltner (Neil Young, Jackson Browne, George Harrison, Bob Dylan, John Lennon, and many more).

Salutations begins with the gentle Folk Rock of “Too Late to Fixate,” a brand new track that explores hindsight, obsession, and that deadliest of sins, envy. Ruminations‘ “Gossamer Thin” receives a true Folk Rock revival with its new arrangement, while new track “Overdue” presents a mid-temp Indie Rocker with full electric band. “Afterthought” is also brand new, and offers up a Country-tinged Folk Rock sound. Steeped in melancholic guitar and harmonica, “Next of Kin” begins as the tale of making that horrible phone call to inform a survivor of their loved one’s passing by tragedy. Oberst moves forward, lyrically, to explore the idea of growing up, maturing, and caring for oneself so that your own loved one’s will never have to receive such a call. It’s a beautifully emotive and poignant story, set to some bluesy Folk of the utmost echelon.

A standout amongst Oberst’s newest material, “Napalm,” a Bluesy Country jamboree, is the perfect example of his oft hidden wit. “I lost my inhibitions, I think I may have lost my wallet too,” he quips in a musical odyssey that is an upbeat jam set to irony-filled lyrical content. Similarly, one of the album’s best tracks, lyrically speaking, is the bluesy Indie Folk of “Mamah Borthwick (A Sketch),” originally from Ruminations. The song is a beautiful sketch of the many ironies in our world, as told through vignettes of the life of famous architectural genius Frank Lloyd Wright.

Consider the truth in Oberst’s words: “It costs twenty dollars to visit Fallingwater, it’s a perfect house where no one lives. Maybe someone once did but they got evicted by a busload full of greedy tourists.” Throughout the track, Oberst references some of Wright’s most infamous works – including Wisconsin’s Taliesin, Pennsylvania’s Fallingwater, the Guggenheim in New York City, and the Imperial Hotel in Tokyo, Japan (where Wright only provided design for portions of the building complex) – all while questioning what is sacred in our modern world. It is a quintessential example of his sophisticated genius.

Ruminations’ “Till St. Dymphna Kicks Us Out” weighs heavily on the knowledge that St. Dymphna is the patron saint of depression, mental illness, and emotional distress. Oh, and it’s also a bar in New York that is reportedly a former hang-out of Oberst’s and owned by one of his friends. As a song, “St. Dymphna” explores that always-present crowd at the local bar, and questions what has brought them to their barstools. (We all know that a bartender is really a free counselor, right?)

Also originally from Ruminations, “Barbary Coast” is a sincere confession, an exploration of Oberst’s psyche. He makes an immense, emotional impact with the following verse: “I don’t mind my head when there’s room to dream / Feel like Paul Gauguin painting breadfruit trees / In some far off place where I don’t belong / Tried to lose myself in the primitive / In Yosemite like John Muir did/ But his eyes were blue and mine are red and raw / ‘Cause the modern world is a sight to see / It’s a stimulant, it’s pornography / It takes all my will not to turn it off.” Overwhelmed by the overstimulation of a neon world, it is clear that Oberst turns toward artwork and nature for solace.

New offering “Empty Hotel by the Sea” presents a splendid musical arrangement with violins, harmonica, guitars. However, as we all know, when Oberst’s music is upbeat, his lyrics tend toward the morose: this appears to be a macabre tribute to Oberst’s older brother Matt (an English teacher and founder of the band Sorry About Dresden), who passed away suddenly in November 2016. There are some insinuations amidst these lyrics, though that is too personal to delve into in a mere album review.

A trio of tracks off Ruminations follows: “Counting Sheep,” a melancholic glance at a world of sheep who are afraid to make waves; “The Rain Follows The Plow” about following in your parents’ shoes, rebelling, though ultimately returning to one’s roots; and “You All Loved Him Once,” a cautionary remark on society’s ability to quickly turn love to hate, stabbing a knife into an unsuspecting back. They are beautifully-orchestrated Indie Folk tales that serve to prove the profundity of Oberst’s story-telling abilities.

Ruminations‘ “A Little Uncanny” ushers us toward the album’s ending, new track “Salutation.” The first is a name-checking glance at how riches and good looks lead us astray toward false idols. Instead, search for people with some talent beyond their looks: “I miss Christopher Hitchens / I miss Oliver Sacks / I miss poor Robin Williams / I miss Sylvia Plath / Every morning’s a desert / Every night is a flood / They say a party can kill you / Well sometimes I wish it would.”  The latter, the album’s title track of sorts, is a slow-burner with beautiful slide guitar.

Salutations contains recurring themes of refusing to drink the Kool Aid that society sells, denying false idols, and forging a unique identity, no matter the cost. It is a beautiful collection of stories, a literary anthology put to music that is Folk, Alt Country, Americana, Indie, and Rock. Harmonica, accordion, stellar guitar work and extraordinarily layered sonics are the keystone of Salutations, the basis for its varied and eclectic tales.

At seventeen tracks, it is a bit lengthy, but the ride is an enjoyable one overall. Oberst is clearly a sophisticated, world-weary genius who questions every iota of life and never pauses to even consider that cup of cherry Kool Aid. For an exquisite look into a multi-talented musician’s psyche, CrypticRock gives Conor Oberst’s Salutations 5 of 5 stars. 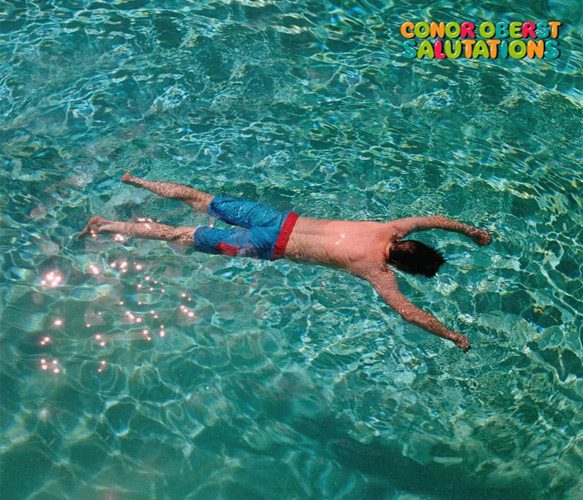 Oberst, with The Felice Brothers as his backing band, is currently on tour in support of Salutations. He has partnered with Plus 1 so that $1 from every ticket sold will go to support Planned Parenthood and their work delivering vital reproductive health care, sex education, and information to millions of women, men, and young people in the U.S. and worldwide.