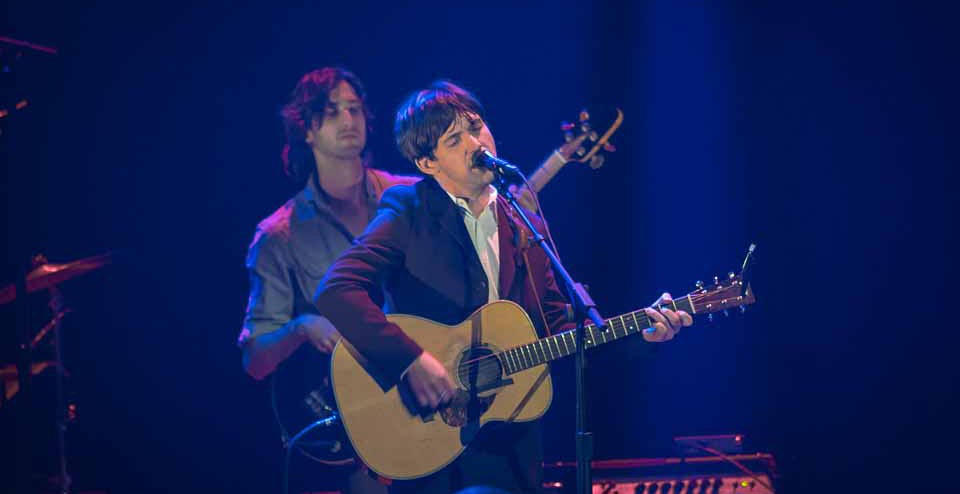 On Thursday May 22nd, Conor Oberst and special guest Dawes played a sold out show at The Space in Westbury, NY. In support of his newest album, Upside Down Mountain, released May 19th, Oberst began the tour on May 8th and has played host to one packed venue after another.  For many it was their first time visiting this venue known as The Space.  With an abundant amount of music venues popping up across Long Island in recent years The Space opened in 2013 after extensive renovations, revamping the theater into a lavish place complete with opulent chandeliers. The first people to arrive gathered near the stage buzzing with chatter, their excitement palpable.

Dawes started the show at 8 PM to a warm reception. A folk band in the vein of Neil Young or Crosby, Stills and Nash, their sound is often described as simply “Laurel Canyon.” Indeed, their songs are littered with references to Los Angeles.

It was not long before singer/guitarist Taylor Goldsmith announced that he and the rest of the guys – Griffin Goldsmith on drums, Tay Strathairn on keyboards and bassist Wylie Gelber – would also be Oberst’s band for the rest of night. This thrilled the audience, especially as the support set continued and it was clear even to first time listeners how skilled they were at their respective instruments.  Many who were already Dawes fans in attendance, as evidenced by the exuberant reaction of the crowd to songs like “When My Time Comes”, which had numerous swells of people singing along. Taylor is a charismatic front man, who easily connected with the crowd throughout the hour long set.  The band was also was in good spirits and even debuted a new song, “Right On Time”.  Dawes third studio album Stories Don’t End recently celebrated a one year anniversary and is worth an addition to folk-rock fans collections.

After much anticipation Oberst took the stage just after 9:30 PM, opening the show with Upside Down Mountain’s first track “Time Forgot” and heading right into track two, “Zigzagging Toward The Light.”  The packed crowd showed they are obviously happy with his latest album, reacting with cheers and delight to both.

Oberst has earned most of his acclaim as Bright Eyes, a band where he was the only consistent member on each album and heralded as an indie folk prodigy. He finally retired the name after nearly two decades, in 2011.  Oberst  introduced the Bright Eyes song “We Are Nowhere And It’s Now” from 2005’s I’m Wide Awake, It’s Morning by saying, “This is about the in between times no one thinks matters as all…turns out they’re the only times that matter.”  He was particularly talkative all night, continuously thanking everyone for being there but also showing a droll sense of humor. After “To All The Lights In The Windows”, from Conor Oberst and The Mystic Valley Band, he joked about the crowd “updating their statuses” on their phones and on another occasion quipped to a fan who was shouting at him relentlessly – “Tweet that and I’ll read it later.”

Resonating with the audience was another song off of Upside Down Mountain, the beautiful, yet dark “Desert Island Questionnaire”.  There was also plenty of older material,  like sing-along favorite “Bowl Of Oranges” and “Method Acting” – playfully dedicated to method actor Daniel Day Lewis. Both are from Bright Eyes’ 2002 breakout fourth album LIFTED or The Story Is in the Soil, Keep Your Ear to the Ground.  Other highlights included the neurotic, yet uplifting “If The Brakeman Turns My Way” and the mournful fan favorite “Poison Oak.”

Oberst with Dawes played a high energy “Another Travelin’ Song” and left the stage. Anticipating a return, the crowd clapped and cheered until Oberst and Dawes reappeared and played a three song encore beginning with “Cape Canaveral.” Then came “Hundreds of Ways”, the first single off of the new album and bound to become a live favorite. Oberst then bid his fans goodnight with “Roosevelt Room” and the response was wildly enthusiastic to the riotous performance of the rocker.

Oberst played for roughly two hours, without a moment of filler in the tight set.  Dawes provided a formidable backing band and had great chemistry with Oberst, as they have played together before and obviously enjoy doing so. Everyone on stage had raucous energy and even conveyed it during slower songs with effectively intense performances.  You never know what incarnation of Conor Oberst will come next, and that has become part of his draw.  Both old and new fans alike should make a point to catch this tour.