Conquest of the Planet of the Apes 45 Years Later

In a world where cats and dogs have perished, and man’s best friends are apes, one chimpanzee rises above all others. All hail, Caesar! Where is this all going? Well, it is the 45th anniversary of Conquest of the Planet of the Apes of course! 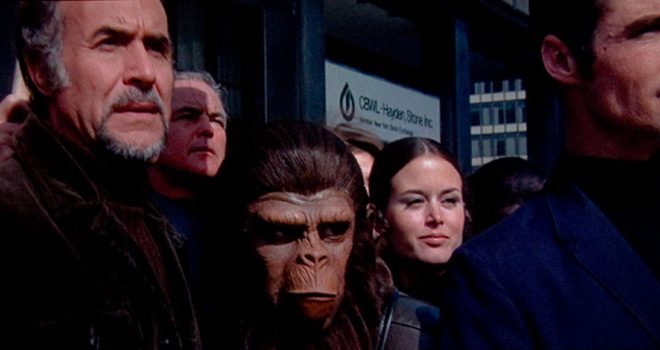 At the end of Conquest of the Planet of the Apes, the original cut included the brutal murder of Governor Breck. Pre-screened for a Phoenix audience, it caused such an impact that the producers reworked the film to lower the rating, despite no money left in the budget. McDowall dubbed a new part of Caesar’s speech, and the scene had ‘creative’ editing to show Caesar having mercy on Breck. Realizing that roles between man and ape had reversed, Caesar proclaims at the end, “Tonight, we have seen the birth of the Planet of the Apes!” Of the five originals, it was the only film not rated G, as well as the most violent, with 59 people killed. The 2008 Blu-ray features both the theatrical edition of the film, as well as the uncut, which restores the original ending and other graphic scenes. 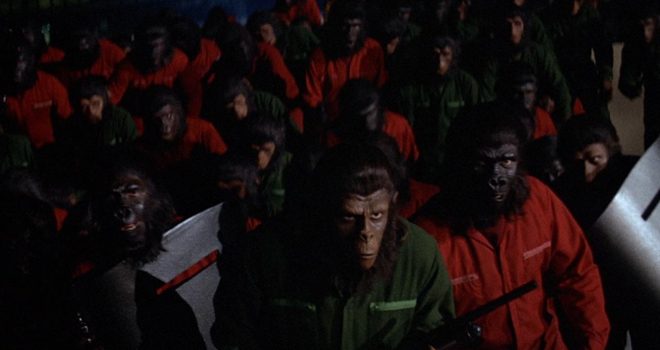 One of the most important factors in Conquest of the Planet of the Apes, is that we see the rise of Caesar and the beginning of the future seen in the first Planet of the Apes. The story is coming full-circle and themes find full realization. Race and civil rights are still in a volatile area in the late 60s and early 70s. The Planet of the Apes movies put a thin facade over the political climate of the era and strives to bring it into an arena of common humanity. It also offers a searing condemnation of those who do not just take nature for granted, but actively abuse it. Caesar realizes that his freedom and vengeance are feeding a vicious cycle, one which sees apes take over as inhumane masters of human slaves in the future. These themes continue their relevance, sadly, in 2017.

Now 45 years since its release, many of the actors who starred in Conquest of the Planet of the Apes have passed on, but all left their mark on the entertainment industry. Veteran Actors Lou Wagner (Planet of the Apes 1968, CHiPs series) and Don Murray (Knots Landing series, Twin Peaks 2017 series) still delight with their performances today. A young Tom Scott composed the music for the film and has since gone on to play saxophone for music greats such as Paul McCartney, Frank Sinatra, Pink Floyd, the Beach Boys, and the Grateful Dead. He was also a founding member of the Blues Brothers Band, though he did not appear in either film. His father was the great Nathan James, who has over 1,000 movie and television music credits, including the theme songs to iconic series’ Dragnet and Lassie.

Just as the Apes movies reused actors in sequels, they also used costumes and sets from previous projects. Jumpsuits worn by the apes were leftovers from the 1964-1968 Fox series, Voyage to the Bottom of the Sea. The Ape Management Center ended up a redressed set from 1971’s City Beneath the Sea. Insignia patches, along with computer cabinetry, came from 1966’s The Time Tunnel series. 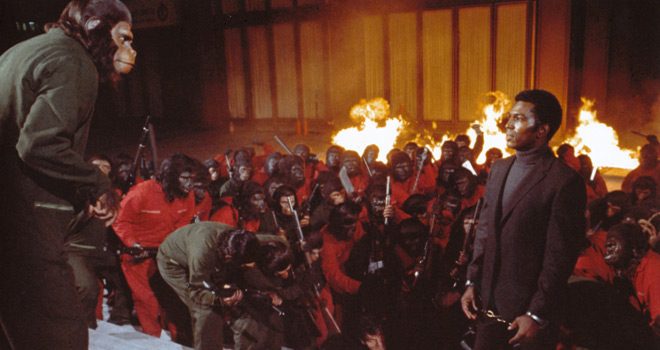 Though not celebrated as one of the best stories in the franchise, on an estimated budget of $1.7 million, Conquest of the Planet of the Apes grossed approximately $9 million in US theaters and a respectable $4.5 million in video rentals. Perhaps explaining some of the low returns, each Apes sequel tended to acquire more budget trimming than the film before it, given 20th Century Fox’s financial troubles of the late ’60s and the ’70s. Overall, the film is an underrated classic, like most of the original Apes films.

The current reboots have won many new fans, and Andy Serkis (The Lord of the Rings: The Fellowship of the Ring 2001, Star Wars: The Force Awakens 2015) has lovingly brought Caesar back to life. Hopefully, now the originals will find interest from new generations and continue to live on as classic cinema legends. 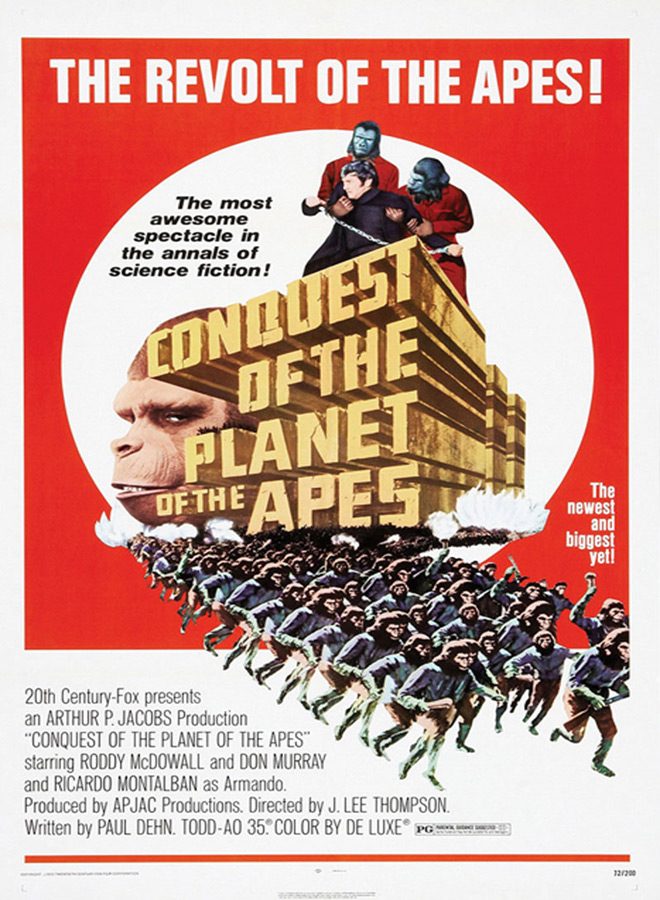 Purchase Conquest of the Planet of the Apes: Amazon | iTunes