After more than two decades, Total Fucking Darkness, the infamous third demo from notorious UK extreme metal magicians, CRADLE OF FILTH, will be unleashed on gatefold double LP and digipak CD via Mordgrimm this Spring.

The undertaking was helmed by vocalist Dani Filth, former guitarist Paul Ryan (currently of The King Is Blind) and Cacophonous Records founder Frater Nihil, who first signed CRADLE OF FILTH, in an effort to bring fans old and new a remastered version of the demo along with material that had been sitting in the vaults for twenty years.

Given new life at Turan Studio in Oxford with the aid of engineer Tim Turan (who has worked on everything from Emperor to Thin Lizzy), Total Fucking Darkness commences with “Spattered In Faeces,” the only surviving track from the now mythical Goetia sessions, followed on Side A and the rest of Side B with the recordings from the Total Fucking Darkness demo. Side C offers up another previously unreleased hymn with “Devil Mayfair (Advocatus Diaboli),” recorded in a rehearsal studio on Samhain 1992, followed by three more tracks from the same session, a further hint of the material that would have featured on the aborted Goetia album. Two short instrumental movements from former CRADLE OF FILTH keyboardist Ben Ryan are also included.

Housed in a heavy gatefold sleeve with paintings featuring the perverse visions of Radio 1 Presenter and occult artist, Daniel Carter, the legendary recording will be released in an initial mail-order edition of 666 copies, unleashed in an unholy trinity of three two-color, 180-gram vinyl variants limited to 222 copies each; orange/black, blue/grey and grey/black. Each copy includes a limited edition booklet with a foreword by Dani Filth and formerly unseen photos from the band archives. A retail version in blue vinyl with insert, and a digipak CD, will be available from Amazon and other outlets on May 5, 2014, with the limited edition version slated for release two weeks earlier.

Total Fucking Darkness Track Listing:
Side A
1. Spattered In Faeces
2. The Black Goddess Rises
3. As Deep As Any Burial
Side B
1. Unbridled at Dusk
2. The Raping Of Faith
3. Fraternally Yours, 666
Side C
1. Devil Mayfair (Advocatus Diaboli)
2. The Black Goddess Rises
3. Seance And Mandrake (Instrumental)
Side D
1. The Raping Of Faith
2. Unbridled At Dusk
3. Hekate Enthroned (Instrumental) 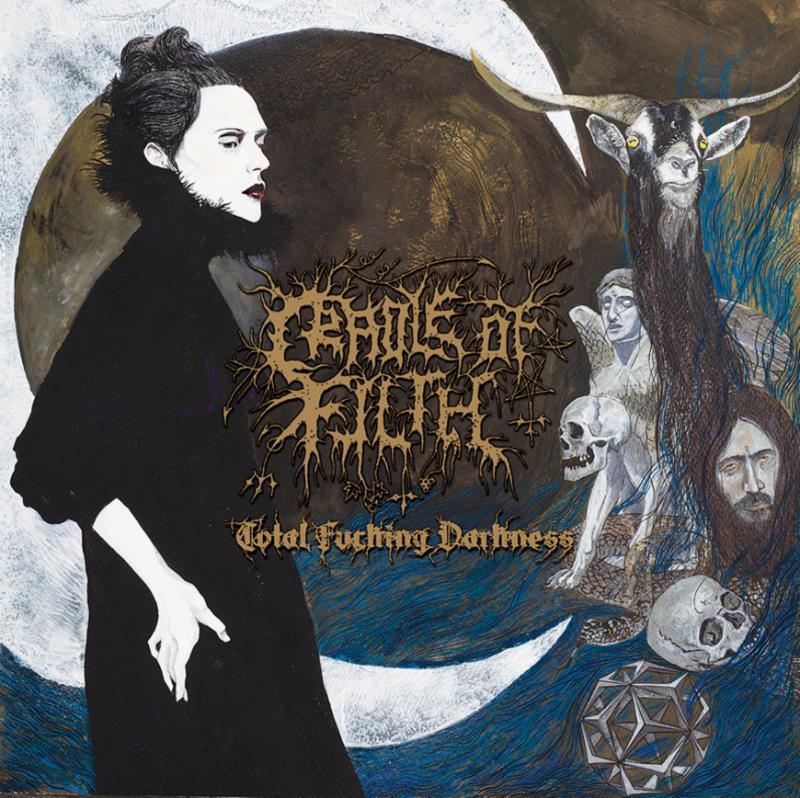 CRADLE OF FILTH’s Total Fucking Darkness will drop on May 5, 2014 via Mordgrimm. Preorders are currently available at THIS LOCATION.