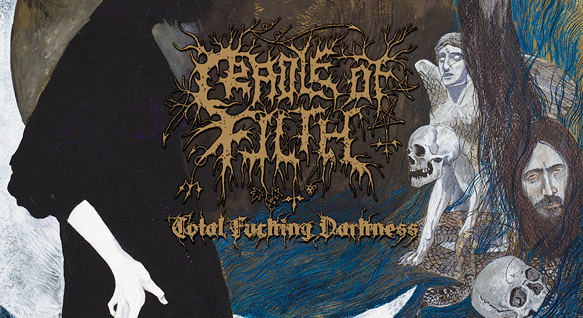 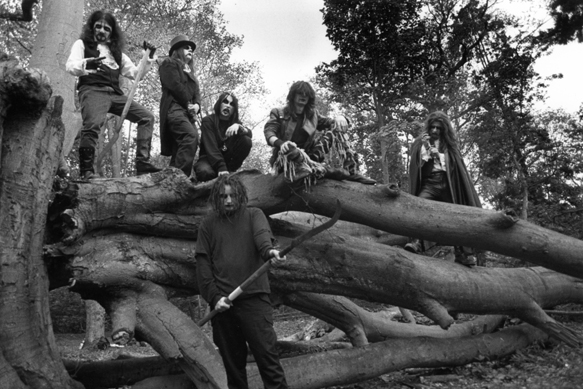 The hard-hitting extreme metal band Cradle Of Filth has been going strong since 1991, when the band formed in Suffolk, England. Though the band has had quite a few lineup changes, it has continued to be a singular, cohesive unit with a unique sound and style. Ten studio albums into their career the band is now releasing their first ever demo album of unreleased tracks of the early years by the name of Total Fucking Darkness. These hidden treasures span the band’s entire career and give listeners a bit of insight of how Cradle Of Filth has changed over the course of their two plus decade existence.

The album begins with a heavy song titled “Spattered in Feaces.” Though the song begins softly with an orchestral intro, it soon flows into a monster of a track. The vocals are heavy and deep, and so are the instruments. The guitar riffs are the type that make you want to head-bang until you get whiplash.  Directly following is “The Black Goddess Rises,” a track some you might recognize, as it was on the band’s full-length debut The Principle of Evil Made Flesh (1994). Though this demo sounds a bit different, the song itself is quite similar regardless of the different introductions. While the album version has a piano intro, the intro on the demo is very minimal; practically non-existent. It pretty much goes straight into the song, which is not a bad thing and gives the listeners a different take on the track.

The next track “As Deep as any Burial, is a stand out of this collection beginning with a simple guitar riff, but also an organ playing behind it.  Between Dani Filth’s screams, the organ, consistent bass, and the minor key in which the instruments are played, the song sounds positively evil, which is delightfully.

The fourth track, “Unbridled at Dusk” is a track that is almost enight minutes long. It begins with a guitar, which leads into the other instruments joining in, and finally, Filth’s scream leading into the song. The track has moments of each band member’s talents flowing through. The guitars dominate throughout the first few minutes. After which, a short bridge of keyboards and drums plays, and then the guitars come back, and finally the vocals. The layering of instruments in this track is something that Cradle Of Filth does often, and though it is not unique to them, they do it very well.

Moving along, “The Raping of Faith” is a track that begins like a horror film.  Terrifying the listener a woman screaming in the background is heard, and the intro reminds one of the background music in a horror film when someone is about to be snuffed. The song is very heavy and pounding, with the guitars being in the forefront, along with Filth doing his signature style vocals, some deeper and some higher pitched effects.  The song “Fraternally Yours, 666” is an instrumental piece, which consists of an organ and a sort of electronic vocal sound from a keyboard. It is a nice intermediary between all of the heavy songs on this album giving the listeners neck some rest from all the headbanging. The resting time is short, however, because the next song, “Devil Mayfair (Advocatus Diaboli),” goes right back doing what metal does best – smashing your face in. The song starts off slowly, then goes into fast, hard riffs and beats, into a surprisingly soulful guitar solo, and finally ending with the drums playing us out.

The song “The Black Goddess Rises” makes another appearance on the album, but this time, the vocals are a bit different. The lyrics seem to have changed as well, though the music has pretty much stayed the same. This version of the song leads us into another instrumental track called “Seance and Mandrake.” This track uses keyboards and drums to giving it a sort of 1970’s vibe.  Fans of this sort of styling will thoroughly this song and its spooky vibe.

Another version of “The Raping of Faith” is next. This time around the intro has been excluded, and the track goes straight into the thick of it. The song is still heavy and still gives off that horror vibe Cradle Of Filth loves so much. This then leads into “Unbridled at Dusk,” which starts right away, rather than having an intro, making its running time slightly shorter. Even though it is shorter, it is no less of an excellent song.   This edition is more unrefined, the vocals are a bit less clear, and the guitars sound a bit grittier.  Finally, the last track is titled “Hekate Enthroned,” and it is another instrumental track, which has that same 1970’s organ tone that the previous instrumental track “Seance and Mandrake” had. It rounds the album off and it sounding like the ending of a film.  Overall Cradle Of Filth did a fine job putting this collection together and it should do just fine holding dedicated fans over until the eleventh studio album is unleashed at sometime in the near future.  CrypticRock gives this album 4.5 out of 5. 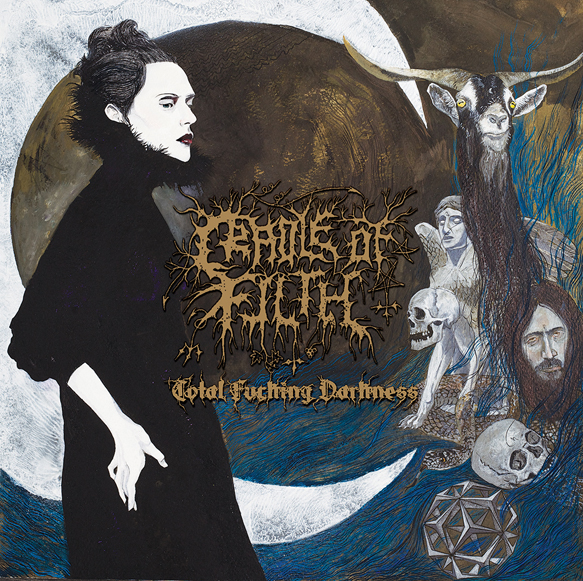 Bethany is 27 years old and is currently a senior in college. She is expected to graduate in May of 2015, and is an History major. She is working on an internship at a local Historical Society. She is currently a writer and editor for CrypticRock. Some of her interests and hobbies include, but are not limited to: ancient history, reading texts, watching horror and fantasy films, playing horror video games, brewing the perfect cup of tea, and cooking.