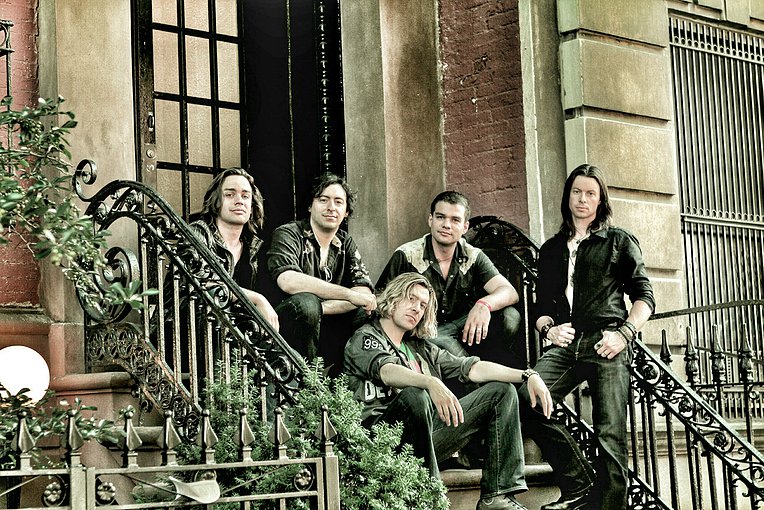 There is no need for a time machine to experience a full on ’70s Classic Rock sound. Crash Midnight is a breath of fresh air for listeners who crave the sound of guitar crunching Arena Rock. Formed in Boston, Massachusetts, Crash Midnight found their name by accident – literally. As bass player Bo was driving home from a party late one night, he crashed his car and wrapped the vehicle around a tree. When he woke up in the hospital, he immediately called lead vocalist Shaun Soho to tell him he had a band name, and thus Crash Midnight was born. Releasing their debut album, Lost in the City, back in November of 2014, the recording lineup, along with the aforementioned Bo and Soho, was Alex Donaldson on lead guitar, Todd Friedman on rhythm guitar, and Jim Possible on drums. Looking to make a splash with their throwback styling, the band hit the road with The Pretty Reckless last year and now look to continue to spread the word of Lost in the City into 2015.

Opener “151” is the band’s first single and an energetic anthem that gives the listener a generous taste of what they are going to get out of this album. Once the track sets off, it never slows down, using compelling guitar notes to equally complement the song. Next is “Made For The Money,” with Donaldson showing off his thrashing guitar riffs and Soho’s punch-drunk lyrics dealing with a woman’s greedy appetite for greenbacks, giving listeners a well-written, relatable song. Then, “Welcome To Boston” offers up a warm invitation to the band’s beloved city. Soho’s vocals make this a stand out track as he proves that a Retro band can still be original in many ways. Raising the track’s popularity, The New England Patriots played this fiery anthem during every home game at Gillette Stadium in the 2014 season as they made their way to the Superbowl.

Bringing on a ready-made Rock classic, “Outta Control” is about living life in the fast lane and features some raunchy guitar work. Next, “You’re The Only One” is an unforgettable song that drives the listener down the road of love, standing out from other songs on the album with its softer lyrics. With a epic power blast solo by Donaldson, “Diamond Boulevard” ultimately shows off the the axeman’s lightening fast skills. Maintaining a catchy rhythm, the song has what it takes to have listeners bopping their head and tapping their toe. A vividly flowing and rhythmical song, “City Girl” is about being in a relationship on the breaking point. The pace is gilded in perfect harmony with the story of the song.  Meanwhile, “Goin’ Down The Drain,” a slower piece from Lost in the City with perfectly placed guitar riffs and influential lyrics, is about trying to make the best choices and the struggle to stay afloat with all of the everyday hassles in life. With soft-spoken lyrics, “Somewhere Yesterday” is an acoustic experience that will emotionally move anyone listening. Its compelling words will stick in the outer stretches of the listener’s mind for some time.  “Long As It’s Free” speeds the pace back up again and rocks the audience out with speaker pounding drums that puts this track at the top of the album. This leads into the final song, “Nowhere To Go,” which is a perfect closer to end this retro rockin’ album. The guitar riffs alone shoot this track straight into the Classic Rock category, but will please any fan of Rock-n-Roll, young or old.

For listeners looking for a Rock adventure to jam to and some well-written, dramatically inclined music, look no further. Crash Midnight’s sound is a sensational throwback to the Hard Rock genre, all the while adding their own twist to the mix. Lost In The City is bold and brash with a blend of irresistibly retro catchiness that will lead to a bright future for Crash Midnight. CrypticRock gives Lost in the City 3 out of 5 stars.