This week marks the thirtieth anniversary of one of Horror’s most iconic ’80s era Creature Features, Ghoulies, released March 2, 1985 by Empire Pictures and Ghoulies Productions. Also known as Beasties, Ghoulies was directed by Luca Bercovici (Rockula 1990, The Granny 1995) and produced Jefery Levy (Drive 1991, S.F.W. 1994), with both men having co-written the script together. The accompanying music was composed by both Richard Band (House on Sorority Row 1983, Re-Animator 1985) and Shirley Walker (Apocalypse Now 1979, Batman 1989), while the special effects/creatures were by John Carl Buechler, the man behind Freddy’s chest of souls from Nightmare on Elm Street 4: The Dream Master (1988). Re-Animator’s Jeffrey Combs auditioned for the role of Jonathan Graves, but the role ended up going to the relatively unknown Peter Liapis (Ghost Warrior 1984, Alone With A Stranger 2001). Ghoulies also starred Lisa Pelikan (Lionheart 1990, Return to the Blue Lagoon 1991), Michael Des Barres (Nightfliers 1987, Mulholland Drive 2001), and Jack Nance (Eraserhead 1977, Blue Velvet 1986), and was the film debut of Law & Order: SVU’s Mariska Hargitay. 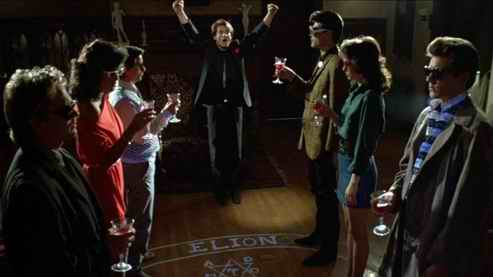 Ghoulies could be considered the poster child for the mid ’80s, what with the all-around big hair, random outbursts of breakdancing, gaudy jewelry, clashing outfits, a guy wearing sunglasses at all times, a guy wearing windshield wiper sunglasses, the inclusion of midgets, practical effects using hand puppets, Satan worshipping, and the fact that everything was covered in gooey corn syrup. Made to ride the Gremlins (1984) train, Ghoulies references several other movies including Rosemary’s Baby (1968), Alien (1979), and Easy Rider (1969). Filmed in Los Angeles at the Wattles Mansion (Rain Man 1988, Troup Beverly Hills 1989), this cult classic was famous for the poster art depicting the bald, green ghoulie popping out of the toilet. The response was so positive that Levi and Bercovici shot the scene as an afterthought, as it had not been included in the original film. The image was not quite as popular with children, though. Parents from across the country wrote thousands of letters to executive producer Charles Band, complaining that their kids were now afraid to use the bathroom. The original concept for the film was much different than that of the final product, but was rewritten to appeal to teenagers. Initially, the film was going to be about a kid moving into his grandfather’s house who finds out that the inspirations for his grandfather’s stories are living in the house and trying to kill him. 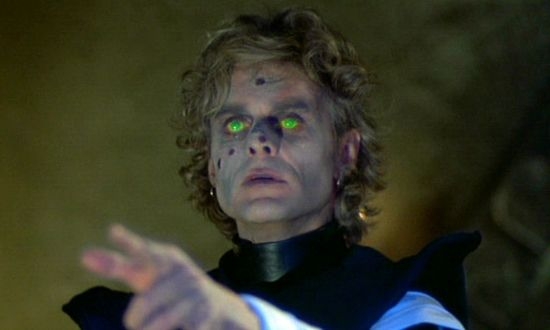 The movie begins as Satan Worshipper Malcolm Graves (Des Barres) prepares to sacrifice his own infant son, Jonathan, in front of his wife and members of his sect. His wife manages to slip a protective pendant over the baby’s neck, which saves him from his father’s evil but gets her killed in the process, as the first Ghoulie is called forth to burst from her chest. In the confusion, Satanist-with-a-conscience, Wolfgang (Nance), grabs the baby, runs away and raises him far away from his insane father. Twenty-five years later, Jonathan takes his girlfriend, Rebecca (Pelikan), to the house he had just inherited from his late birth father. Although he seems like a kind-hearted man, living in the house changes him, and soon he can not resist the calling of his father’s black cloak and Dark Arts tools. When he finds Malcolm’s Book of Shadows, he starts on a single-minded journey to perform the black magic his father had once practiced, although he does make a replica of his mother’s protective pendant to give to Rebecca. During a house party, Jonathan dismisses all other party games and convinces his friends to perform a ritual in the basement that will call up a demon. Their friends – Donna (Hargitay), Toad (Ralph Seymour), Mike (Scott Thomson), Eddie (David Dayan), Dick (Keith Joe Dick) and Robin (Charene Cathleen) – think the ritual is a joke and leave the basement as a squashed werewolf Ghoulie appears. 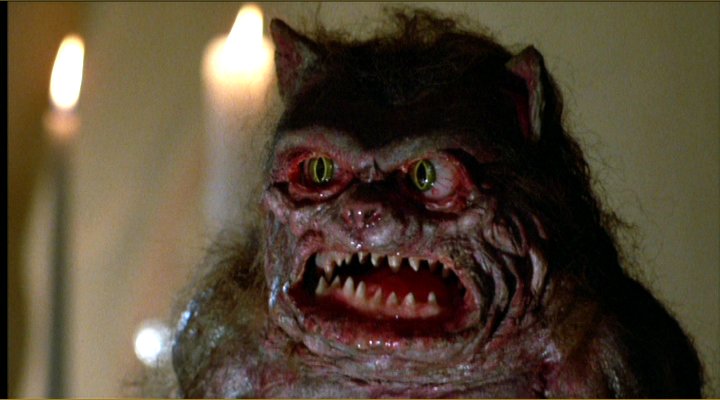 Later, Jonathan calls up more ghoulies – the bald, green, water one from the poster, a spider one in a spun web, a monkey one in a tree, and a mole-ish one that came up from underground, among others. Becky finds out about Jonathan’s extra curricular activities, rips off her pendant and leaves, but that only gives him more time to call up other creatures. This time, he gets himself two arguing demons named Grizzle and Greedigut (Peter Risch, Tamara De Treaux) who cast a spell on Rebecca to get her to come back. They explain that getting eight people together will enable him to perform a ritual for more power and knowledge. They have a dinner party with their oblivious friends, who are used to perform a ritual that ends up bringing back the late Malcolm rather than give Jonathan his intended powers. It seems that the demons lied. Malcolm commands his minions – ghoulies and demons alike – to kill off the other kids. The ghoulies set to chewing off human faces while Malcom turns himself into a beautiful seductress who strangles Dick with his/her tongue and a walking clown doll turns into a mini Godzilla and kills Robin. The demons even get in on the action and take out the stoner, Mike. One by one they all die, leaving Jonathan to wrangle with his undead dad and the defector Dark Arts creatures. Just as Malcolm is about to finish what he started years before by killing Jonathan for his life force, he is surprised by Wolfgang, who suddenly appears and they battle to the death, with lots of lightening and eye sparks. As they disappear in a flash of light, Jonathan gathers up Rebecca to run away, and they see their friends are all suddenly alive again. The friends hop in their cars and leave, but just as they think they are safe, a ghoulie pops up in the backseat of Jonathan’s car. 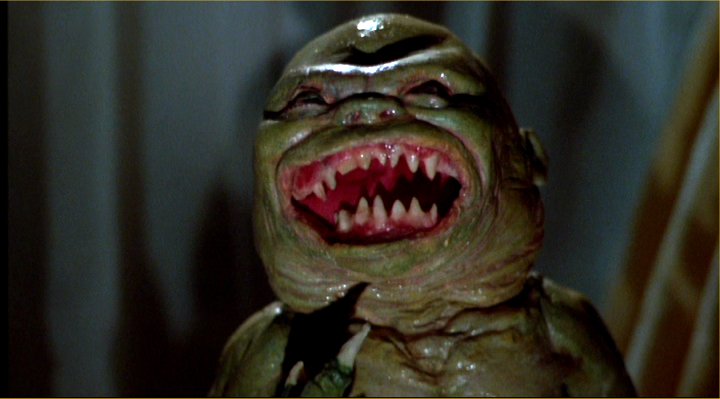 Many have complained about the lack of actual ghoulies in a movie titled Ghoulies, and it is a fair complaint. The amount of screen time the critters get is pretty low, and while they do cause some havoc, most of the really cool destruction was caused by non-ghoulies. With a budget of one million dollars leading to a gross of thirty-five million dollars, the complaints did not stop the masses from buying a movie ticket. Although Rotten Tomatoes gives Ghoulies an unprecedented 0% rotten, the movie spawned three sequels: Ghoulies II (1988), Ghoulies III: Ghoulies Go to College (1991) and Ghoulies IV (1994).  Colorado’s Rock Punkabilly band The Ghoulies named themselves after this ’80s classic and the movie was even spoofed on the Adult Swim TV show, Robot Chicken, during the episode titled Here’s Your Problem… (2009). So, while Ghoulies is not a movie for everyone, there certainly is a fan-base out there for lovers of slimy little monsters. 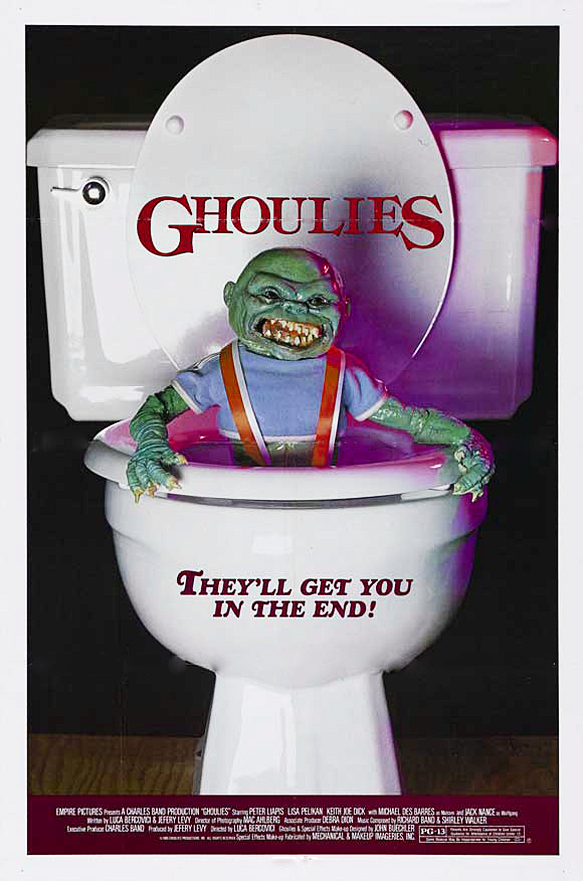