Sometimes that one neighbor that stares from behind his blinds is just a nosy old man. Then again, sometimes he is planning to vacuum seal others around him like a slab of steak. Premiering back on February 13, 2016 at the 66th Berlin International Film Festival, the film Creepy lives up to its name with its characters unaware of the twisted play that lies ahead. Directed by Cult favorite Japanese Filmmaker Kiyoshi Kurosawa (The Cure 1997, Pulse 2001), the Mystery Thriller based on the novel by Yutaka Maekawa now hits DVD in the US as of February 28th via Kimstim films. 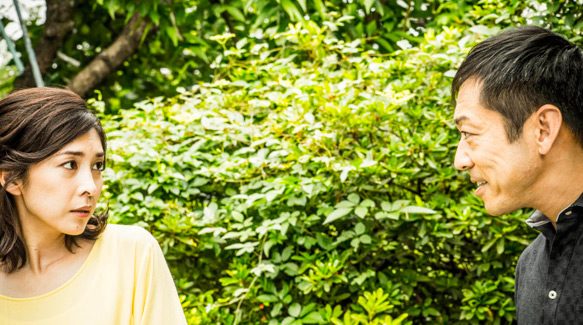 The story begins with Detective Takakura (Hidetoshi Nishijima: Dolls 2002, The Wind Rises 2013), who is burned out from his job. He and his wife, Yasuko (Yûko Takeuchi: Ringu 1998, Strawberry Night 2013), move to a new apartment, while he starts a new job teaching at a university. They meet weird neighbor Nishino (Teruyuki Kagawa: Tokyo Sonata 2008, From Up On Poppy Hill 2011) and his daughter, Mio (Ryôko Fujino: Solomon’s Perjury 2015), and an ex-colleague draws Takakura into a six-year-old cold case of a missing family. Mio later reveals to Takakura that Nishino is not her real father, but a complete stranger, and the plot thickens.

A genre-bending Horror film classified as a Mystery Thriller, Creepy uses a police procedural framework. Throw in a dash of noir and family drama and viewers will find a movie that defies expectations. A beautiful film, the settings and cinematography create an atmosphere of melancholy and unease; gardens and parks are overgrown and the buildings are close. All this creates a claustrophobic effect that amplifies the tension as characters are physically squeezed together. 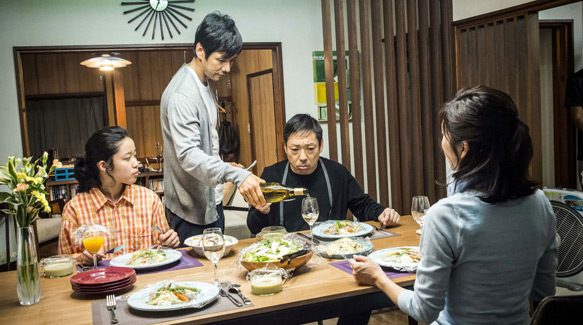 The best aspect of the film is Kagawa’s portrayal of Nishino. As the namesake “creepy” neighbor, he delivers a stellar performance with moods that unexpectedly shift from friendly to hostile and nervous to confident – all with erratic physicality. He plays against Nishijima’s Takakura with disturbing fervor and their dissonant chemistry provides the best suspense of the movie. Acting was solid throughout, though several scenes were melodramatic.

Beyond all of the good, Creepy has one major flaw, the story requires a suspension of disbelief that goes so far beyond logic and verisimilitude that it is a constant detraction. Some of this may just be lost in translation, but the sheer amount of coincidences and facts that the movie asks the audience to swallow is quite absurd. Just what are the chances that Takakura is going to move in next door to the very perpetrator of a six-year-old cold case that he only discovers by getting his new job? Besides that, the tagline ruins the answer to the main mystery – everything is predictable. 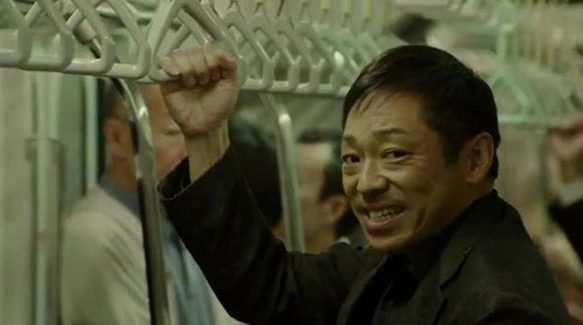 While many have given Creepy praise, in the end, how much one enjoys it may be based on how much they care about logic in Horror. It is worth watching, in large part because of Nishino, who, as the axis for the film, is arguably one of the best serial killers delivered on screen in a decade. Because of its eclectic executioner, superior cinematography, and despite its flight from logic, CrypticRock gives Creepy 3.5 out of 5 stars. 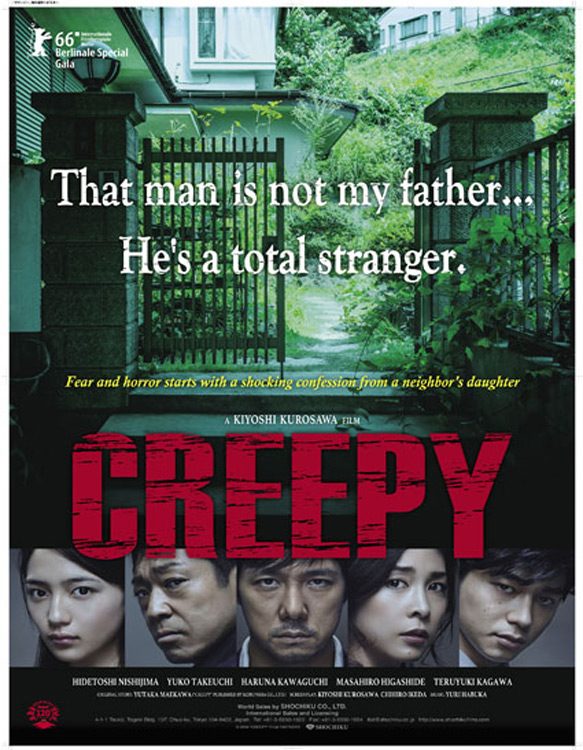