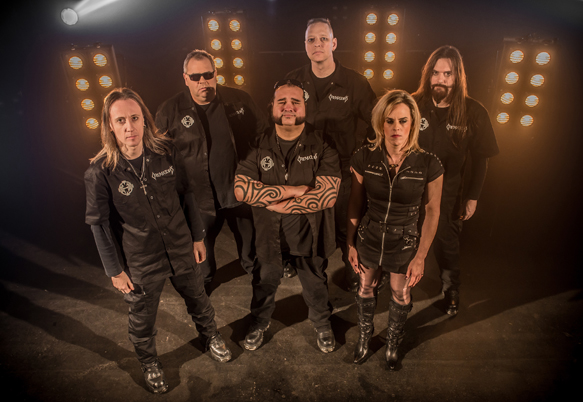 The Gothic Metal act Crematory has been mastering the sub-genre in Germany since 1991, bringing twenty-five years of inspiration with their darkened sounds mixed with technical Industrial movements since 1993’s Transmigration across the globe. With the departure of Harald Heine (bass guitar, backing vocals) and Matthias Hechler (guitar, clean vocals), Felix Stass (vocals), Markus Jüllich (drums), and Katrin Jüllich (keyboard) together move forward to release Crematory’s thirteenth studio album, Monument. Holding a different creative delivery due to a new energy that was sprung on by an immediate lineup change, the new album release via SPV/Steamhammer Records on April 15, 2016 marks a sort of new beginning for the band.

During the recording process of Monument, aforementioned Hechler departed from the group on amicable terms and private reasons during the spring of 2015. Replacing him took not one, but two new members as Tosse Basler joined in on rhythm guitar/clean vocals and Rolf Munkes came in on lead guitar. Another recent change happened after the recording process where Heine was immediately replaced by Jason Matthias. Changes led towards a new collaborative writing shift where Monument is a heavier album than its predecessor, 2014’s Antiserum.

The album kicks off with “Misunderstood” as an Industrial hook erupts leading in an ambiance as a distorted guitar riff crawls in with grueling vocals that follow. The song will engage the listener from the get-go with its pain and being misunderstood themed lyrics, and Symphonic elements to embrace the darkened mood. The next piece, “Haus mit Garten,” moves in with their native German language. It knocks in with a Heavy and coarse beat as the pace shifts to a silent whispering Melodic and morbid medley. There are constant changes between electronic and Progressive breaks as the focus moves to the drums during the halfway mark. A differently structured guitar riff swoops in shortly after, bringing in a heavier flow. This song alone sheds slight similarities between bands such as Eternal Tears of Sorrow, Omnium Gatherum, and Insomnium. Switching back to English, the next, “Die So Soon,” opens up with a synthesized electronic hold. Clean vocals enter in with backing Melodic instrumentals. It brings an interesting similarity to the Progressive act Ayreon as the lyrics emphasize the possibility of accepting an early death with verses that discuss wasted years.

Moving into the third part of the album with “Ravens Calling,” it electronically fades in, followed by clean Progressive vocals. It is another different style than the first few songs where this aesthetic variety continues to captivate the listener. Leading into an Industrial introduction with the next song, “Eiskalt,” up until it shifts towards back to the Melodic pace similar to the beginning of the album. It fluctuates with the emotion of anger as the aggressive energy continues to escalate with German lyrics. Switching back to English with the morbid song “Nothing,” lyrics roll in with words such as, “Nothing in the world to see except for endless pain and misery. There is nothing in my heart to find; nothing sacred, nothing kind. Seeing if there is anything worth fighting for. Nothing seems true and real.” This saddened subject on misery is delivered with an uplifting tempo as the guitar erupts later into the piece to express this emotion even further.

Continuing with the bleak vibe, “Before I Die” enters with a doomsday sound with the enhanced keyboards followed by a morbid guitar riff leading to the callous vocals. The lyrics scream out the subjects of death, life, and pain as the pacing accelerates with Heavy instrumental breakdowns. Moving back to the German language with “Falsche TrÑnen,” it is another aggressive piece. It moves along with a fun and catchy rhythm as the energy behind the lyrics appear emotionally diluted. A soft piano is heard during the next, “Everything,” where the keys silently echo along until the instrumentation combines. This is one of the saddest pieces of the album as it is about mourning on losing everything forever and feeling completely and utterly alone.

Picking the pace up slightly is “My Love Within,” electronically erupting. It is another sad piece on emptiness, longing, a lost love, and making heartbreaking sacrifices. Electronic aggression continues with “Die Letzte Schlacht” as it continues in the native language. The Morbid themes continue with Melodic breaks and atmospheric distortions, however, this song is coincidentally repetitive and fun. The album concludes with “Save Me” as it brings in a heap of Gothic elements. The lyrics scream about wanting to be saved from hell, turmoil, and pain as the melody melodically moves in an engaging direction.

Crematory’s Monument bewitches the listener as it takes one on a journey of human suffering. In addition, the musical elements continue to complement each other between the haunting drums, harsh guitar riffs, and demonical keyboard tones. Unique to their more recent work, the album fulfills a twelve track piece that guarantees brutality all the way through. CrypticRock.com gives Monument a 4 out of 5 stars. 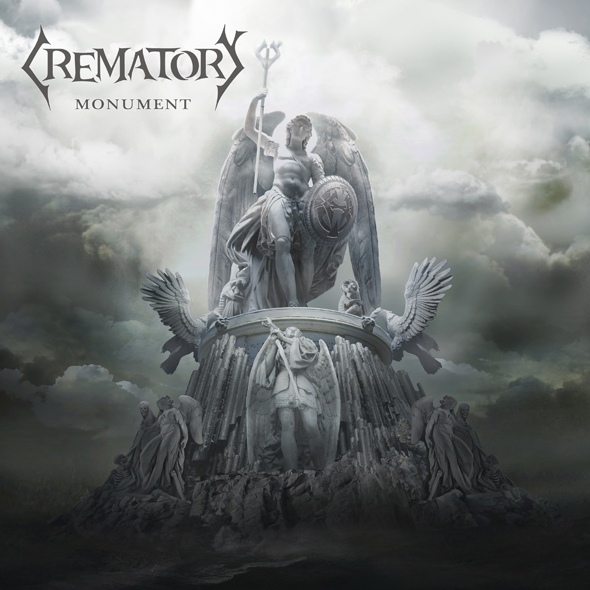