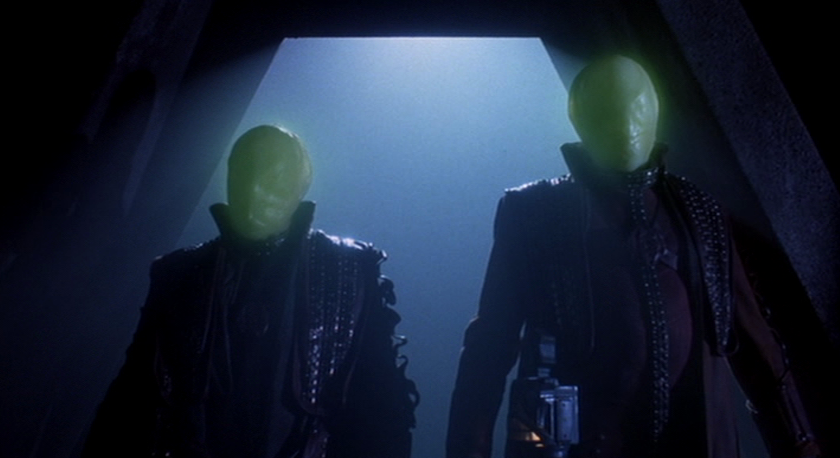 In outer space, two intergalactic Bounty Hunters, Ug (Mann) and Lee, are cruising around the cosmos when they get a distress call from Warden Zanti (Michael Lee Gogin: The Lord of the Rings 1978, Fear and Loathing in Las Vegas 1998), of a prison asteroid, that ten Krites have escaped in the prison’s fastest ship. The Bounty Hunter’s mission is to eliminate the dangerous and hungry Krites before they can multiply.

On Earth, the Browns are a typical mid-western farm family: Jay (Bush) is a farmer, self-made man, and local bowling league champion. His wife, Helen (Wallace), is a stay at home mother who takes care of all the house work and imparts wisdom to her children. Their daughter, April (Van der Velde), is a high school student of sixteen or seventeen with all the normal teenage girl problems. Her little brother, Brad (Grimes), is on the verge of puberty and is a troublemaker with a penchant for homemade fireworks. Charlie (Opper), Brad’s friend and employee of Jay, has a good heart, but is considered the town drunk and lunatic who babbles on and on about UFOs and receiving transmissions through the fillings in his teeth. 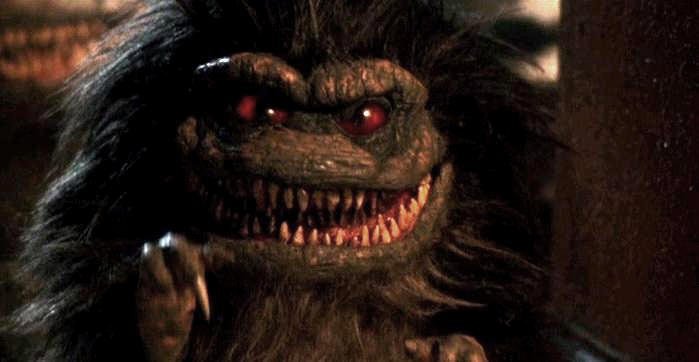 One night, the Krites land and devour local cop, Jeff (Ethan Phillips: Star Trek: Voyager TV series, The Island 2005). Meanwhile, the Bounty Hunters have landed on the outskirts of town and are searching for the Krites. Ug has taken the human form of big hair rocker, Johnny Steele, and Lee takes on the form of the dead cop. The Krites make their way to the Brown farm and eat their cattle. Jay and Brad investigate, are horrified by what they see, and head back to the house. Helen sees a pair of glowing red eyes out the kitchen window just as Jay and Brad make their way back. Suddenly the power goes out. Jay goes down to the cellar to investigate and is attacked by one of the Krites.

April is with her boyfriend, Steve (Billy Zane: Back to the Future 1985, Tales From the Crypt: Demon Knight 1995), making out in a barn when they are attacked by the Krites. Steve is killed, but Brad comes to April’s rescue and gets her back to the house, which is now being barricaded. Brad leaves to go get Sheriff Harv (Walsh) and runs into the Bounty Hunters who have left a trail of destruction in their wake. Brad convinces them to help, but will they make it in time to save the family and stop the Krite terror? 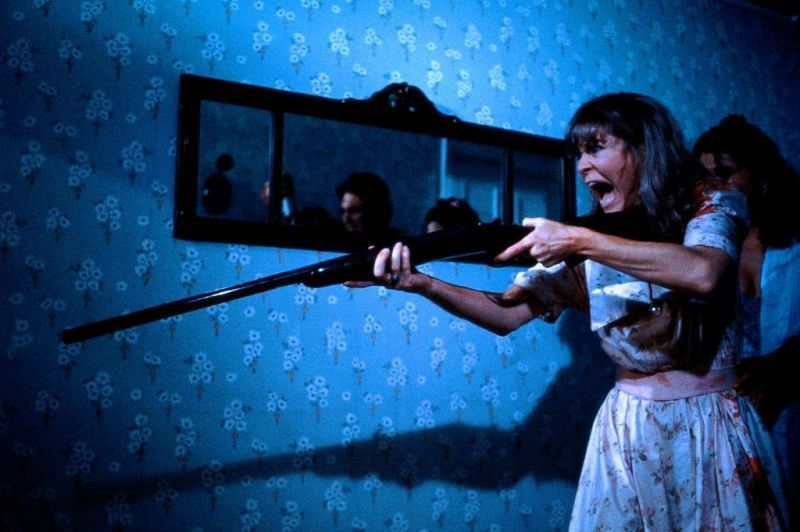 The family Brown seems like an actual family; Wallace’s “Helen” and Bush’s “Jay” were a very convincing husband and wife, especially when the going gets tough. Grimes’ “Brad” and Van der Velde’s “April” could have really passed for brother and sister the way they played off one another. Brad is the precocious little brother to April’s high school big sister. Right from the beginning, they get into it with Brad hogging the bathroom, for what purpose: to run a thermometer under hot water to get out of going to school. April wants to get ready, but leaves in a huff and goes downstairs. When they are all at the breakfast table, April spoils Brad’s hooky plans by revealing he has a geometry test. He calls her a shit-head and they trade nasty faces; a true brother and sister vibe.

Opper’s “Charlie” is the town drunk and looney, who used to be a ball player, but pissed it away in a whiskey bottle. He now does odd jobs around the town and spends a night or two in the drunk tank at the local prison, but he has a good heart and is a great friend to Brad. Walsh’s “Harv” is the town sheriff, who seems close to retirement age and thinks he has seen it all until the Krites come, but he handles it pretty well. The shapeshifting Bounty Hunters were simply awesome. Mann’s “Ug” gets his face from fictional big-hair Rock Star, Johnny Steele, from a music video he sees when he is researching Earth life. Lee, who takes on various forms and is not credited, is a bit trigger happy as he shoots up a bowling alley and a church with their canons. Ug is the more civilized of the two. Lee does not talk much. And yes, their names are Ug and Lee. Dee Wallace reminisces about working on Critters: (It was) “FUN!! We all just had a lot of fun with those hairy little creatures, and with each other! That’s where I met Scott Grimes and had him come in for my series the next year, Together We Stand. We ended up working together for two more years. Billy Green Bush was great. Just…fun!”

The Critters were designed and puppeteered by the Chiodo Brothers (FX: Critters 2 1988, Team America: World Police 2004), who gave the Krites unparalleled realism on film. The most spectacular effect of the film, though, belongs to the scene when Ug’s face takes shape. They melted the green part down to a bloody skull with a heat gun and reverse time lapsed the melting of a mold of Terrence Mann’s face. However, this effect was not repeated when Lee transformed, instead opting to show his shapeless face glowing blue and all of a sudden being either Jeff, Reverend Miller (Jeremy Lawrence: Body Double 1984, Another Midnight Run 1994), or Charlie. Wallace recounts a funny moment working with the furry little buggers: “You know, there were two (I think) Critters that were really completely made, and the others were little hairballs that the guys would just roll through out onto the set. We lost it many times in a dramatic scene when we would hear, ‘Roll ‘em in!'” 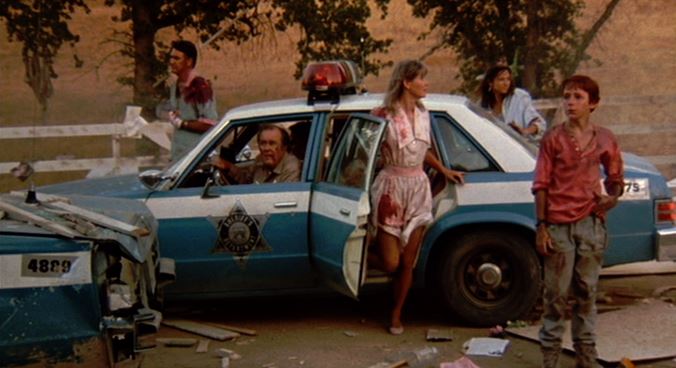 Critters was released at a time when little monsters, like 1984’s Gremlins, 1984’s Ghoulies, and 1987’s Munchies were all the rage on the big screen. With that in mind, Critters was promoted as New Line Cinema’s answer to Gremlins. The Krites are vicious, wisecracking, little creatures; they are the antagonists, but they soon become a viewer favorite. At one point, when they are tearing up the Brown house, a Krite comes across an E.T. doll and it asks, “Who are you,” then tears it to shreds when the doll does not answer. There is also a moment where a Krite rises out of a toilet, which is a direct reference to Ghoulies. Even today, Critters gets referenced in Pop culture, like on the TV show American Dad, which just happens to be where Scott Grimes does the voice of the son, Steve Smith. In the episode “A Pinata Named Desire,” he is planning out a sleepover with his friends which he says, “Well, after pizza, we’ll retire to my treehouse and watch an eighties crap-fest, like Critters or Critters Two…”

Critically, Critters was well-received. Roger Ebert gave it a three star rating upon his viewing in 1986 stating, “…All of these plot threads move inexorably toward the final showdown, but what’s interesting is the way the movie refuses to be just a Thriller. The director, Stephen Herek, likes to break the mood occasionally with a one-liner out of left field, and he gives the critters some of the funniest lines. What makes Critters more than a ripoff are its humor and its sense of style. This is a movie made by people who must have had fun making it.” So anyone who has not indulged in the world of the Krites should absolutely revisit Critters, which has as much bite and humor today as it did thirty years ago and remains just as enjoyable. 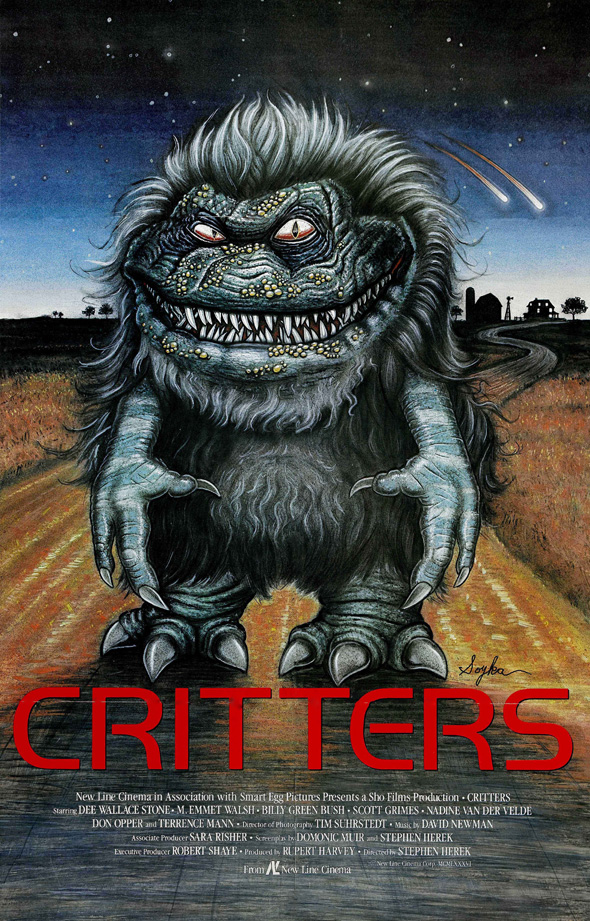