Crossing Rubicon – No Less Than Everything (Album Review) 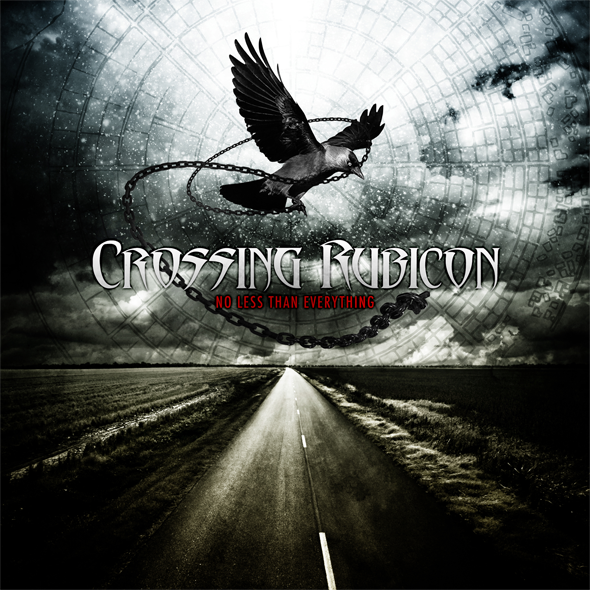 March 4, 2016 Crossing Rubicon – No Less Than Everything (Album Review) 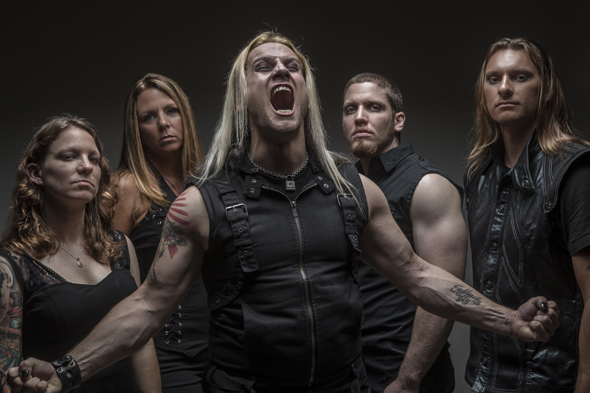 Unlike Crossing Rubicon, the desire to succeed may not always be an aspect in which bands seek to achieve. Sometimes triumph can be found in the pure enjoyment of writing music, but for this Connecticut group, success and passion is clearly an avid characteristic. Starting off as a two member band in 2009, Crossing Rubicon, a Hard Rock ensemble based in Bristol, CT, had every intention of becoming something monumental. After a handful of changes in their lineup, Crossing Rubicon has a stable set of dedicated members who consist of Vocalist Scotty Anarchy (vocals), Guitarist Zach Lambert, Guitarist Steven Riccio, Drummer Brandi Hood, and recently joined as of 2015, former All That Remains Bassist, Jeanne Sagan. Releasing their debut EP In Pains Of Sleep in 2012, and opening for bands such as Mötley Crüe, it is fair to say that Crossing Rubicon has made a noteworthy entrance that will not be soon forgotten. While also being an unsigned band, it can lead to difficulties while in the music making process, but that did not stop Crossing Rubicon from getting with a record label and recording their first full-length studio album entitled No Less Than Everything. A massive step for the hard working band, it was released on February 12th via Pavement Entertainment and shows a band ready to make an impact.

With a defined Melodic Hard Rock style, Crossing Rubicon is a band that enforces power and angst through each note and lyric on their record. Kicking No Less Than Everything off with the track entitled “Tomorrow Never Comes,” Crossing Rubicon indulges themselves and listeners into a fury of anger and betrayal. The song features heavy guitar riffs alongside Anarchy’s ’80s Metal-toned voice. Starting off with a deep, throaty growl, “Unhinged,” the leading single off the album, is another dark quality track about breaking away, therefore becoming deranged and mentally unstable. With a rapid tempo, “Never Again” plays next, highlighting a melodic guitar solo and euphonic lyrics, keeping the same tone as the first two tracks off the record.

Slowing the album down to a moderate tempo, “The Fallen,” featuring harmonic background vocals and another impressive guitar solo, is about moving on from past events that may not have been too pleasing. Picking the pace back up again comes track number five, “Bittersweet Day,” an upbeat modern Metal song about dealing with one’s obstacles amidst acceptance. “Cut Deep” then comes on, sounding like a tune right out of the ’80s. The song spotlights heavy guitar tracks, background vocals, and ghastly spoken lyrics. Sticking with the same dark and grim tone, “Who’s Gonna Save You” starts off slow and light, but leads into heavy instrumentals and lyrics filled with rage and sacrilege.

“Violent Carson,” the eighth track off of No Less Than Everything, starts off with a sort of chanting leading into heavy instrumentals, as per usual. The song’s background vocals feature the chants heard earlier in the song, and more spoken lyrics. Kicking off with a catchy guitar riff, “Reason To Beg” is a regret-filled song, fueled by anger and outrage. One of the more heartfelt and real tracks off the album, “Do We Not Bleed” is about having feelings just as every human being does, and how being treated differently is unacceptable.

“I’m Here” is a track that is similar to others off the album, but still stands out on its own. With intricate guitar licks and solos, as well as heavy drum beats, the instrumentation gives emphasis to the lyrics and verbrotic vocals about not being pushed to the side. Bringing the album to a close with track number twelve, entitled “Return To Atlantis,” the song starts out with ocean-like sounds, followed by rhythm guitar tracks, and then adding in lead, drums, and vocals. This track gives a positive vibe and has an upbeat tempo. It is about overcoming your past and pressing on, eventually moving on to paradise, a perfect way to end an anger-filled album, not reluctant to move on.

For those interested in the heavier sides of Rock, Crossing Rubicon is a band to give a shot. With an early ’90s Metal and modern spin, featuring raw vocals and solid guitar solos, older and younger generations will enjoy this anger-induced record, and will surely be looking forward to more in the future. That is why CrypticRock gives Crossing Rubicon’s No Less Than Everything 4 out of 5 stars.