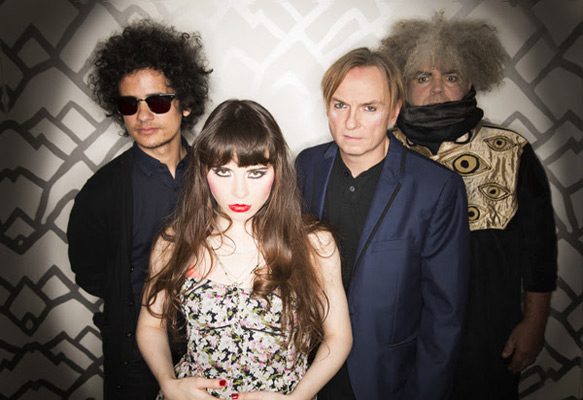 Hey, you. Want some drugs and Rock N’ Roll? Or at least Rock-n-Roll that creates a high? Crystal Fairy have the cure for what ails you, baby. An exciting new project, their self-titled, self-produced debut arrives on February 24th via Ipecac Recordings. Those who lust the days of yore, when music was bloody raw and straight from the garage to their ears, Crystal Fairy have that covered.

Those still vague on what exactly is being said, Crystal Fairy is not a hot new street drug, no: they are the latest “supergroup” composed of Teri Gender Bender (Le Butcherettes), Omar Rodriguez-Lopez (Mars Volta, At the Drive In), King Buzzo (The Melvins, Fantomas), and Dale Crover (The Melvins, Altamont).

The idea for the band has foundations in a tour between The Melvins and Le Butcherettes: The Melvins began performing “Rebel Girl” with Teri each night, and the pairing produced a spark of musical inspiration birthed out of mutual respect. “Teri is a force of nature performer extraordinaire,” says Buzz. “It seemed like the obvious thing to do to ask both Teri and Omar if they’d like to write some music with us . . . I couldn’t wait to get in the studio with them. Dale and I were thrilled they agreed to work with us.” With several lifetime’s worth of musical experience between them collectively, Crystal Fairy are certain to possess something special. Their brand of sludgy doom and sensual gloom will appeal to fans of Metal, Rock, Punk, and beyond.

“Things moved quickly,” said Omar about the recording process. “Most of the songs were written and recorded over Pho while watching cannibal movies. Nothing in moderation.” A perfect visual for an album that is cannibalistic, no-holds-barred, rabid, hungry Rock N’ Roll, or, if you will, Stoner Metal.

The album begins with “Chiseler,” a track chock full of some seriously groovy bass work by Rodriguez-Lopez, while Gender Bender’s vocals are balls-out Grit N’ Roll. Lyrically, however, this feels like a strangely profound acid trip where we learn about life’s cruelties. Check this out: “There is no end, every monkey must transcend. When you think you’re all dried up, bright waves of heat will take what’s left. So hide yourself from the sun after you melt!” Indeed.

In fact, all of the lyrics throughout the disc – largely authored by Gender Bender – are a bizarre, off kilter journey into a land of the psychedelic and poetically peculiar. Gender Bender (née Teresa Suárez) has been compared to the likes of Karen O and Siouxsie Sioux, as well as Bjork; you can consider her the American-Mexican Punk Rock Bjork who kicks ass on both sides of the border. Set to demolish any walls that might stand in her way, Gender Bender is a kick-ass lady who defies the cheesy Riot Girl moniker. In short, don’t try to stop her: she is coming for your ears.

Back to the music. Tracks such as the sinister romp “Drugs on the Bus” and viscous “Moth Tongue” benefit greatly from Gender Bender’s characteristic aggressively low caterwauls. A track that is seemingly about an extra-marital affair, “Necklace of Divorce” takes those cries from angry to regretful, yet sensual. Title track, “Crystal Fairy,” takes Gender Bender above her range to proclaim, “I’m just a man of a he she, when you can see right through me. My name is Crystal Fairy!”

A Spanish influence creeps into the mix on tracks like “Secret Agent Rat” – performed entirely in Spanish – as well as “Possession.” The first is an embrace of the darkness, while the latter is an in-your-face gang vocal assault that is one of the album’s clear stand-outs. Meanwhile, the languid, psychedelic vibes of “Under Trouble” (“I’m in a jam, nobody wants my money”) leave a delicious aftertaste that perfectly segues into the Nirvana-esque opening chords of “Sweet Self,” a truly stand-out journey through the superego. They close the album out with “Vampire X-Mas,” which is not a musical tribute to a man soaked in, ahem, red. No.

Crystal Fairy, the album, is chock full of modern doom and punktastic gloom, with elements of 1990s Alternative Rock and Grunge, all set to the words of a languid, poetic acid trip. Musically, there is no denying that Crystal Fairy, the band, are absolutely solid and perform as a tight unit.

This is a band that make music for anyone that wishes to dial back to a time when music was an organic process and not a premeditated murder. Admittedly, they are an acquired taste that is not for every palette, but that does not make them any less unique. For their wonderfully sincere instrumentation, bizarre, yet poetic lyrics, and Gender Bender’s innate ability to weave an entrancing vocal spell, CrypticRock gives Crystal Fairy’s self-titled debut 4 out of 5 stars. 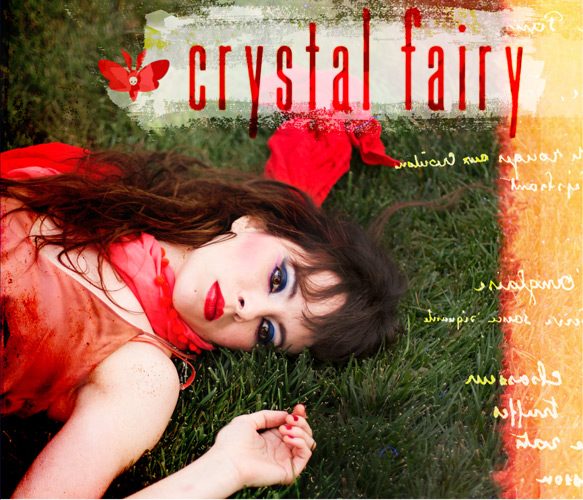