Once in a while, a movie comes along that seems to break all the rules and leaves a lasting impression. Not unlike 2006’s Pan’s Labyrinth, Horror movie Cub has a level of intensity and depth right from the get go, that surpasses many others. A Belgian Horror movie, Cub premiered back in September 2014 at the Toronto International Film Festival, with mostly positive reviews and now gets a Blu-ray/DVD release August 18th via Artsploitation Films. 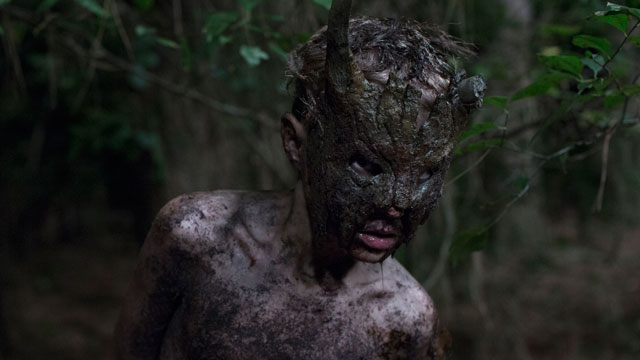 Filming in Ardennes, Belgium, as well as the coal mine of Hasard de Cheratte, with Funds partially raised through Indiegoo.com, Cub was Writer/Director Jonas Govaerts’ (Super 8 2009, Monster! 2010), full feature debut film, and he did an amazing job. Roel Mondelaers (De Vijfhoek 2012, Plan Bart) provides his experience by co-directing, which works well alongside Govaerts. Cub tells the tale of Sam, a young boy whose only high point in life is his Cub Scout group – The Pathfinders. However, he is frequently late and often at the wrong end of his peers and his leaders Peter (Stef Aerts: Cordon 2014, In Vlaamse Velden 2014), Peter’s dog Zoltan, and Kris (Titus De Voogdt: The Missing 2014, Coppers 2015) belittling. Other leader, Jasmijn (Evelien Bosmans: Vossenstreken 2015, Tom & Harry 2015) tries to keep the peace. Peter is by far the worst offender, subjecting Sam to various forms of punishment for his mistakes.

Sam is played expertly by young actor Maurice Luijten (The Gift 2013), who portrays Sam with such confidence, it would be easy to mistake him for more experienced. Despite a recent incident in nearby woods, involving the attack and subsequent disappearance of a couple, Sam’s scout group decides to continue on their scheduled camping trip in an area close to the attack. The scout leaders, Peter and Kris, amp the boys up before the trip by telling them about a legendary creature in the woods – Kai. Kai (Gill Eeckelaert), was a young boy that is now half boy half werewolf, and is likely responsible for the missing couple. This starts the trip on a scary but fun note. 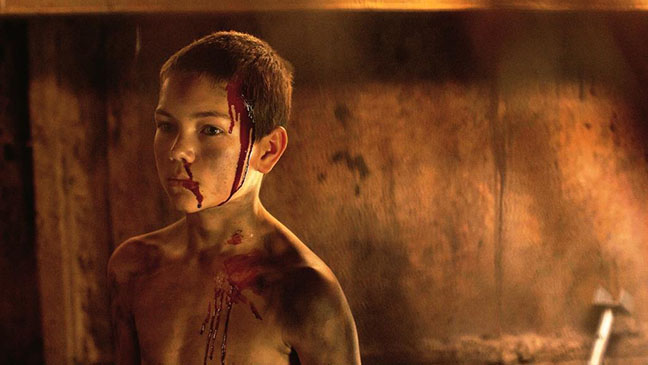 Sam and the scout group encounter two french men, Vincent (Ymanol Perset: Spiral 2012, Colt 45) and Michael (Isah De Zutter), who have taken over the group’s camp site. After an altercation between Vincent, Michael, Peter, and Kris, Peter and Kris are forced to change venues further into the woods. When they arrive at their destination, the boys quickly set up camp, but it is clear that someone is watching them. At night, Peter and Kris tell the story of Kai, and how he is out there waiting, watching them, all the while unaware that he is indeed real. During the day, the tension builds between the group, and between the leaders, as Kris gets tired of Peter’s not taking things seriously. They are visited by the local Policeman Agent Jacques Franju (Jean-Michel Balthazar: Benoit Brisefer: Les taxis rouges 2014, Belgic 2015), who warns them of dangerous poachers, but he disappears before he can be of any assistance. Sam meets Kai, and the two make unlikely friends, which speeds up the coming events.

Simultaneously, as the scout group delve further into the woods, they get closer to unimaginable danger, far worse than the ghost stories Peter told. The death of Zoltan pushes Peter over the edge, and no one believes Sam’s warnings of impending danger. Even Sam cannot see what is coming. Before long, all of them are fighting for their lives, but is there any hope for them anywhere?

Right from the very start, the action and tension are fast-paced, leaving no doubt that this is a Horror film. It is easy for the viewer to feel empathy for Sam, and there is an underlying theme of society’s part in creating sociopathic killers, that is felt strongly by the end of the movie. The story and plot has lots of twists and turns, that are surprising, but not hard to grasp, which makes for easy and fun viewing. It is a character driven movie, with strong emphasis on survival and strength of self. Luijten does an outstanding job as Sam, and his character continues to surprise and develop throughout the story. Govaerts manages to create a story with more layers than an onion, and each becomes more intriguing than the last. 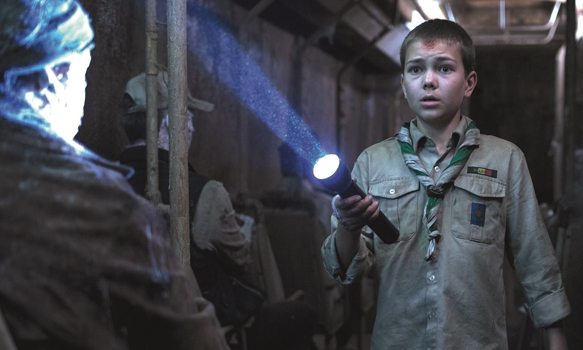 Aside from the outstanding script, and acting, the special effects are seamless and blend invisibly into the scenery, as real as the leaves on the trees. The cinematography by Nicolas Karakatsanis (Bag Man 2014, The Loft 2014), captures the dark and scary atmosphere surrounding the camp, as well as focusing on the characters. Overall, with plenty of blood, gore, and ingenious ways to die, Cub is an outstanding film. Not only a must watch, it is one to watch repeatedly. Each time it is watched, the viewer will no doubt discover even more subtle nuances than the first and second time. Govaerts and Luijten are ones to watch out for. CrypticRock gives Cub 5 out of 5 stars. 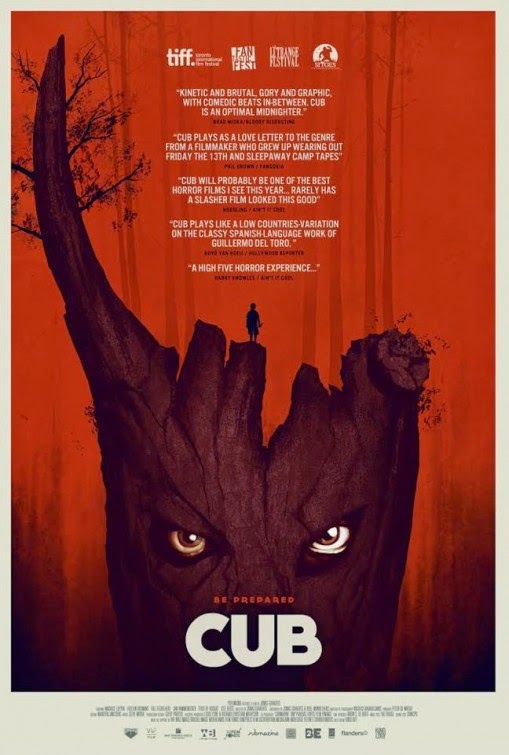 Pre-order Cub on Blu-ray/DVD on Amazon