Out of the depressing and claustrophobic reclusion of 1989’s Disintegration, The Cure resurfaced in the ’90s from its self-inflicted misery with a more flicker-of-light, hopeful predisposition of the follow-up, Wish. After all, the album contained the celebratory track “Friday, I’m in Love,” which ensured and cemented the English band’s relevance in the advent of the genre-diversified ’90s, when the ever-shifting commercial spotlight had turned its favor from the slick and shiny New Wave Pop and Glam Metal of the ’80s to the reckless and rugged Alternative Rock/Grunge of the decade. Amidst all this music revolution and stylistic evolution, The Cure persisted, with impish smirks on its members’ faces, donned in silly clothes and basking in colorful graffiti glory.

Despite the brimful of sunny Pop sensibilities that brightened it, Wish was steeped also with Robert Smith’s brooding and neurotic tendencies—obviously a remnant of its predecessor and something which his bandmates at the time—Perry Bamonte (guitars, keyboards, six-string bass, piano), Simon Gallup (bass), Porl Thompson (guitars), and Boris Williams (drums, percussion)—happily (or despondently) obliged in.

Twenty-five years after, Wish remains unparalleled in the annals of Alternative Rock/Indie Pop music, which is populated by either hopelessly depressed Cobains or manically poppy Albarns, but rarely could one experience the happy-sad paradox being celebrated in the same album by none other than the King of Gorgeous Mope, Robert Smith and his mates in The Cure. So now, let us celebrate the songs that made Wish come true.

The Cure’s ninth studio album, Wish was released on April 21, 1992 on Fiction in the U.K. and on Elektra in the U.S. It aptly started with the almost-seven-minute, self-indulgent, cacophonic, Shoegaze-styled “Open,” finding Smith and cohorts in their aggressive sonic mood. Then, as if intentionally displaying their seeming bipolar propensities, The Cure launched into the happy-trippy, hair-pulling saccharine overdose of “High,” the album’s multichart-topping lead single. Another nearly instrumental, epic, yet slower song followed in the form of the heartrending Gothic ballad “Apart,” which would not be out of character even if played alongside the tracks of Disintegration; what with lines like “She waits all night to feel his kiss / But always wakes alone / How did we get this far apart? / We used to be so close together / I thought this love would last forever.”

A fan favorite and the album’s longest track, “From the Edge of the Deep Green Sea” was also Smith in his usually lyrically poetic and desperately romantic creative state: “I wish I could just stop / I know another moment will break my heart / Too many tears / Too many times / Too many years I’ve cried for you.” The ensuing “Wendy Time” sped up the beat a bit – dancey and funky, practically a midtempo combo of the earlier singles “Hot Hot Hot!!!” and “Never Enough.” Thereafter, with “Doing The Unstuck,” Smith blew up the bags of confetti of frenetically strummed, heavily flanged guitars and childishly playful vocabulary. Following next was the album’s sweetest delicacy and the pinnacle of The Cure’s ’90s smudged-lipped, handclapped-happy glorious Pop—“Friday, I’m in Love”! What fan, with this song, did not fall in love?

After the brilliant and bright heaven’s high of the preceding track, The Cure suddenly dropped the dark clouds of gloominess with the piano-based “Trust”—double the music, half the lyrics—waddling in feigned certainty, drowning in insecurity. The third and final single off Wish, “A Letter to Elise” was founded on the prior song’s piano balladry—a song that must have launched a thousand broken hearts and pulled countless teardrops from the eyes of all the Indie Pop–savvy Elises in the world. Then, the melodrama was suddenly halted short as the Tribal drumbeats, guitar-heavy rhythm, and aural angularity of “Cut” came grinding in like hanging gardens.

Another black-and-gray throwback from the bleak and rain-soaked Disintegration, the penultimate track “To Wish Impossible Things” had perfectly prepared the listener to Wish’s ominous “End.” Such an apt album closer.

To the eternal miserablist, Wish might glow in comparison with the gloomy quadrumvirate of Faith, Pornography, Disintegration, and Bloodflowers. However, to any fan who shares the manic-depressive eccentricity of The Cure’s eyelined, red-lipped, and nest-haired frontman, Wish remains one of the enduring band’s quartet of commercially successful happy-sad oeuvres, alongside 1985’s The Head on the Door, 1987’s Kiss Me, Kiss Me, Kiss Me, and 1996’s Wild Mood Swings. Twenty-five years did not diminish its sentiments; the passing of time even gave the songs more sense and relevance in the context of the current music landscape. 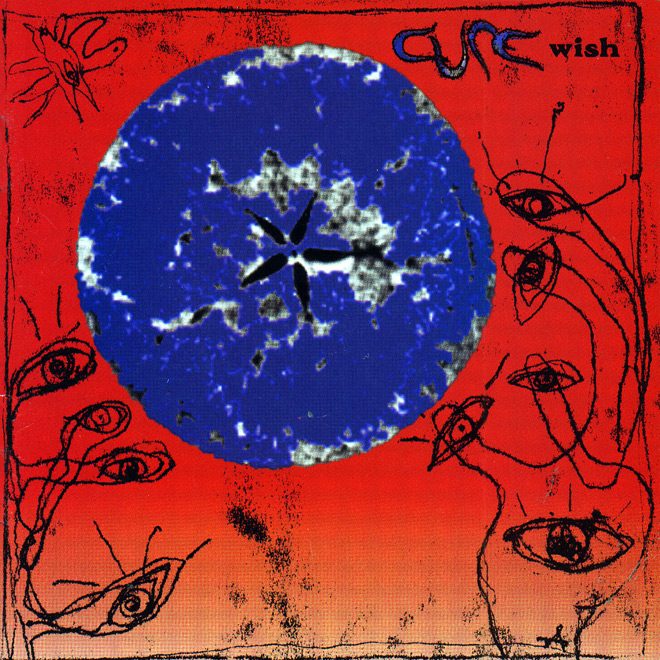