Many music enthusiasts who grew up in the 1980s might have already forgotten the English band Cutting Crew, but the band’s biggest hit song, “(I Just) Died in Your Arms,” will certainly be a part of the soundtrack of their teenage lives. Because of this, Cutting Crew’s music deserves to be elevated into the category of familiarity and influentiality, and its discography another in-depth revisiting.

Cutting Crew was the brainchild of the English vocalist/guitarist Nick Van Eede and the late Canadian-born British guitarist Kevin MacMichael, who first met at a concert in Nova Scotia, Canada, in 1983, when each was still with a different band (Van Eede, with The Drivers; and MacMichael, Fast Forward). Before they parted, the two promised to each other that, if ever their respective groups disband, they form a new band together. To cut a long story short, both bands dissolved eventually and so, in 1985, Van Eede contacted MacMichael and was able to convince him to relocate to London, England, where they formed Cutting Crew with Colin Farley (bass) and Martin Biddle (drums).

The band easily placed itself in the heart of New Wave music, which was at its commercial peak during the decade; and in 1986 released their debut album, Broadcast. Cutting Crew shot to popularity with the strength of songs such as “Any Colour,” “One for the Mockingbird,” “I’ve Been in Love Before,” and the international hit single “(I Just) Died in Your Arms.” Unfortunately, a dispute with their record label stalled the band’s momentum; and by the time their second album, The Scattering, was released in 1989, Cutting Crew had lost its sheen and enthusiasm. Despite the charting of the new single “Everything but My Pride” and the presence of other promising songs like the upbeat “Year in the Wilderness,” the Sophistipop “Reach for the Sky,” and the Rock stomper “Tip of Your Tongue,” Farley and Beedle quit, leaving Van Eede and MacMichael to soldier on through 1992’s Compus Mentus. This became the duo’s third and final album together, as they decided to part ways as bandmates the next year.

Around 2005, Van Eede made an album with another band; but not long after, he decided to re-release it as Grinning Souls by Cutting Crew, making it the fourth album under the band’s name. Inasmuch as he wanted to collaborate again with MacMichael, he could no longer do, for his friend and former bandmate had died in 2002 after succumbing to lung cancer.

In spite of the lack of fanfare around Grinning Souls, the reinvigorated Van Eede, with new band members Guitarists Gareth Moulton and Joolz Dunkley, Bassist Nick Kay, Keyboardist Jono Harrison, Drummer Martyn Barker, and the Blackjack Horns, began touring again, until the group had finally written enough material for a proper new album. In October 2015, the new lineup releases Cutting Crew’s fifth. Entitled Add to Favourites, its sonic styling is definitely a marked departure from the music of the Cutting Crew of old, but only when compared with the stellar New Wave sound of Broadcast and The Scattering. Because, if Compus Mentus and Grinning Souls are to be considered, one will agree that, as early as these two albums, the influence of Blues Rock, Country, Soul, and R&B was already surfacing, albeit gradually. Good reference songs would be “If That’s the Way You Want It,” “Your Guess Is as Good as Mine,” and “Sweet Auburn,” from Compus Mentus; and “Shot of Democracy,” “Silhouette,” and “No Problem Child,” from Grinning Souls. Thus, the current musical direction that Van Eede and the rest of the new Cutting Crew have ultimately pursued in their new album may, after all, be regarded as a natural, yet slow, transition.

Add to Favourites opens with the very poppy “Till the Money Runs Out,” whose instrumentation, despite its Alternative Country/Folk feel, still exudes a slight sensibility of New Wave. An apt album opener, it will fit on a playlist that includes similar-sounding songs by Soul Asylum (“Black Gold”), Counting Crows (“Rain King”), Toad the Wet Sprocket (“Something’s Always Wrong”),Stone Temple Pilots (“Interstate Love Song”), and even an older one like Eagles’ “Take It Easy.”

“Looking for a Friend” is where the Blues and Country mood properly sets in, owing to the cyclical guitar melody and the horn section. The piano-led “Berlin in Winter” is oozing with imagery and poignancy, where the maturity of Van Eede’s vocal stands out. The slow ballad “Kept on Loving You” is certainly bluesy and soulful, complete with a Gospel choir accompaniment. Then there is the beautifully structured “San Ferian,” which starts as a crisp guitar-vocal Folk song and then builds up with the full ensemble of piano, mandolin, upright bass, and other acoustic instruments.

In “Already Gone,” Van Eede seems to be channeling the rustic romanticism of Simon & Garfunkel (“Bridge over Troubled Water”) and the killer crooner instinct of Elvis Presley (“Love Me Tender”) as well as the more recent Chris Isaak (“Wicked Game”). One can hear Van Eede in his most introspective with “As Far as I Can See,” which may trigger a heart-rending attack of young-at-heart nostalgia.

The funky beat and catchy guitar hook of “Biggest Mistake of My Life” evokes The Kinks (“Victoria”) and Joni Mitchell (“Big Yellow Taxi”) in sweet remembrance. “Only for You” returns the atmosphere to bleak balladry, where the listener can almost feel the breath of Van Eede as he sings those sad verses of offering, accompanied by a texture of the Hammond organ, horns, and the indispensable female backing vocals. It comes across as if this is the singer’s swansong, although one must remember that there is the usual customary final encore. For Add to Favourites, this is represented by the breathtaking and tear-jerking as well as even more poignant “(She Just Happened to Be) Beautiful,” which, in spite of its musical simplicity, may be regarded as the album’s most grandiose track in terms of lyrical beauty and emotional delivery.

Obviously, the current musical preoccupation of Van Eede with his band Cutting Crew no longer dwells in the same New Wave dimension. Nonetheless, this should be unsurprising, considering the gradual musical transition that he underwent through almost four decades of musical activity. If there should be more important traits of Van Eede that needs to be recognized, then they would have to be his passion for performing and making music, endurance and longevity, songwriting skills, attention to details, and openness for stylistic diversity, as proven by the musical journey that he took in completing Add to Favourites. After all, there is always extra room for curiosity and exploration in the heart of every music enthusiast. CrypticRock gives this album 4 out of 5 stars. 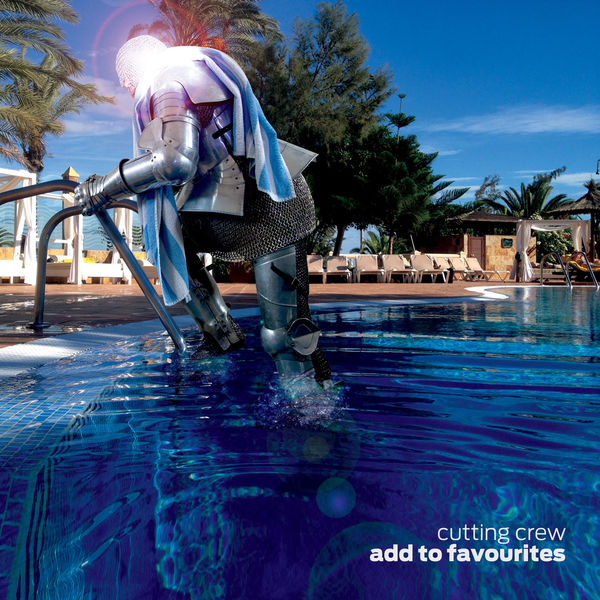