Forming back in 1997, after a decade of experience in the music industry, the French Metal band known as Dagoba is still swinging. Shifting styles throughout their career, most notably heard on 2006’s What Hell Is About, Dagoba blend a variety of styles ranging from Gothic, Groove, Industrial, and Thrash Metal. Experimenting more on 2013’s Post Mortem Nihil Est, 2016’s Tales of the Black Dawn saw the band go in a more Death Metal direction, and now, in 2017, they return with what could be their strongest albums to date.

Entitled Black Nova, their seventh overall studio album hit the public on Friday, August 25, 2017 via their new label Century Media. Carrying a furious sound, what shall fans expect? Well, Black Nova is promised to be a prime cut by Vocalist/Guitarist and Lead Composer Shawter. Recording all of it in his own personal studio, Eagle Black, down in Marseille, France, the record was mixed and mastered by Jacob Hensen (Volbeat, Epica), helping to create the masochistic masterpiece.

Starting off, the album is inaugurated with sounds that are stratospheric and not from this earth with the attention grabbing “Telebra.” Soon landing on the ground, on Earth, the sounds are as if from underground crypts, as if the shovel is coming in contact with rocks as it is dragged along. The instrumental, interesting, mysterious, calculated. “Inner Sun” keeps it truckin’ as listeners are greeted by fathomless vocals darker than the deepest depths of the abyss. The beat beside, electronic, backing the vocals up like a faithful sidekick. In addition, the synths near the end a real treat, as the electro-beat surprisingly combines with the heavy off-set fluently and harmoniously.

Moving along there is “The Legacy of Ares,” a name ringing with something to expect. The intro fits perfectly, vocals steady and heavy, as the instruments in the background give it that anticipation feeling, slightly nostalgic. The guitar and bass midway speed up, while vocals are complete Grunge, yet amazingly clean. The breakdowns are perfect for an epic mosh-pit, taking the audience into “Stone Ocean” smoothly. Fading gently, this track has more of a supernatural, celestial ring to it. Quickly, it is overcome by a haunting echoing drum beat that pounds away. Left to low-toned vocals, with a mix and variety of different tones, showing just how many different styles his voice can perform, every note hit is precise. It is somewhat like an ocean, flood, and refreshing.

Radically more relaxing and gentle, “Infinite Chase” sounds as if underwater, accompanied by the whispering wind. The beat quickly jabs and takes off rough, and with focus. Here, Shawter’s vocals are thunderous and vigorous while accompanied by Industrial elements. Leading into “The Grand Emptiness,” this cut contains rich texture, with the sounds of water the first thing that hits listeners’ ears. Ramming things up, you hear a slumberous scream, as well as gun-slinging guitar riffs, and might be the heaviest track on the album.

Coming near the final stretch of the record, “Fire Dies” is a song nothing like the ones before. Needing no picking up, vigorous vocals, Grunge, and screams paired with an anticipating tempo; this track is definitely lively. Second to last, there is “Phoenix et Corvus” featuring a longer intro which is distinctive and mind boggling. Then, Dagoba take listeners out with “Vanta Black” grabbing everyone’s attention with the faint sound of chains being dragged. Creepy and eerie, the intro upholds the theme. Deep vocals and wailing screams paired, you can hear the emotion behind the vocals.

As many know, 2013’s Post Mortem Nihil led Dagoba to their first ever North American tour. Having rightful distribution in North America once again with Black Nova, hopes are the band will be back sooner than later. Innovative and unfair to take risks, Dagoba does not want to be left behind in the dust and they certainly show their skills with this exciting new album. For these reasons, CrypticRock gives Black Nova 3.5 out of 5 stars. 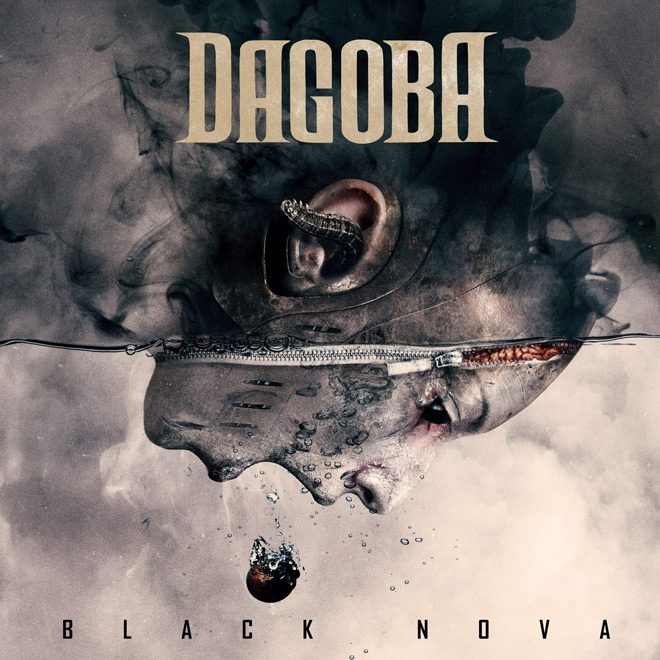