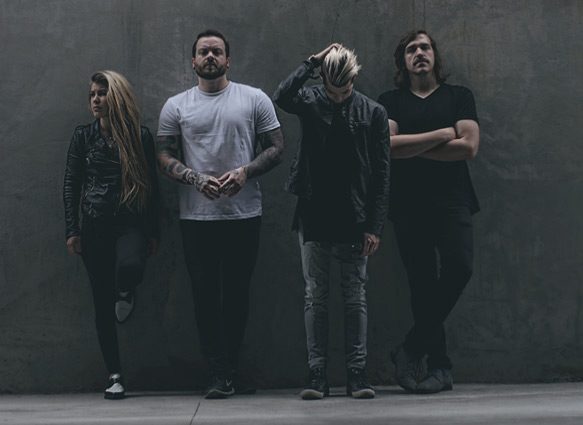 They have been billed as ‘for fans of Linkin Park and A Day To Remember,’ which seems a very fitting description of the young band known as dangerkids. Hailing from the birthplace of Orville Wright, Dayton, Ohio, Dangerkids (stylized as dangerkids or DANGEЯKIDS) is comprised of members Andy Bane (vocals), Tyler Smyth (vocals), Jake Bonham (bass; no relation to the Bonhams), and Katie Cole (drums), who came together to form the band in 2012.

Fresh and hungry to make an impact, the history of dangerkids was relatively short leading up to their critically-applauded 2013 debut album, Collapse. Since then, dangerkids have been working their way across our beautiful blue orb, tour after tour. Making a name for themselves, over the past five years, they have shared stages with We Came As Romans, Sleeping With Sirens, Silverstein, The Devil Wears Prada, The Ghost Inside, Crown The Empire, Set It Off, and Avion Roe.

Taking the very best elements of Nu Metal, twist and warp them into something that fits with the motley crew of Hardcore and Punk-influenced Warped Tour bands, and create a fresh sound that is perfect for 2017 crowds. Those looking for a label, Linkin Park meets A Day To Remember is absolutely perfect as an aural descriptive: harmony with chomping rhythm. This in mind, be prepared to be blown out of your booties, because dangerkids are back with their brand new album, blacklist_.

Dropped on January 27th, 2017 via Paid Vacation, the new album is one of the more talked about on the scene right now. Speaking about the new album, Smyth says: ” . . . It’s dark and it’s pissed off, but most importantly, it’s us deciding to not follow so many of the rules that held us down the first time around. We’re a band that’s been pulled around a lot of different ways and been told what to do by a lot of different people, but we’ve decided that ends now. If anything, blacklist_ is us finally becoming ourselves.”

Ten tracks that run the gamut from blistering Hardcore to melodic ballads, blacklist_ is an admirable offering from this Rock quartet. It begins with the kick-ass Rap-Rock of “Kill Everything,” a shoe-in for a video/single release which is currently getting a ton of airplay on SiriusXM’s Octane. “Wake the dead, tell me I won’t kill everything,” proclaims the catchy, take-no-prisoners chorus. The segue into album namesake, “blacklist_,” is flawless. Chock full of the group’s signature dueling vocals, this feels like Linkin Park on steroids – which, my friends, is never a bad thing, even if drugs are bad.

Throughout blacklist_, dangerkids blend a perfectly healthy dose of angst with corpulent bass-lines, ferocious drums, superb electronics, and solid Rap breakdowns. They cover a good mix of topics, ranging from unhealthy relationships (“Inside Out, “Glass On Water”), to simply being young (ballad “Invincible Summer”), to the emotional “Nothing Worth Saving.” Some of their most angst-filled tracks are, naturally, odes to their naysayers, like “Crawl Your Way Out.” “They’ll fill you with doubt ’til you believe what they say,” confess Dangerkids on this track that is honest, confessional, and contains an all-killer guitar solo.

Their first official video for the album was released over two months ago, for the track “Things Could Be Different.” A compilation of live footage that highlights some of the band’s many fans, the song is one of the heavier tracks on the album. Full of outrage, Dangerkids spit: “It’s not my fault you’ve got nothing to give, so just talk, talk, talk. Motherfucker, I’m over it. I’m better off dead than I was with you . . . Nobody wants to be you.” Clearly, there is no love lost here. Equally punishing, and perhaps the album’s heaviest track, “Summoner’s Rift” is dangerkids in their finest hour. Punishing growls with melodic vocals, a full-throttle onslaught of bass and drums – with an oddly beautiful keyboard refrain – this is a track full of extremes.

Okay, so dangerkids might sound a lot like the sons and daughter of Linkin Park. They take their influences, wear them on their sleeves, but then reimagine their sounds into something that is larger, louder, and more extreme than Chester Bennington and Co. could ever be. Their perfect blend of Rap, Hardcore, melodies, keyboards, crushing drums, and pounding bass-lines is a guarantee of great things to come. In fact, do not be surprised if  Dangerkids make an appearance on the 2017’s Vans Warped Tour. Do not forget their name! For this utterly impressive sophomore release, CrypticRock gives Dangerkids’ blacklist_ 4 of 5 stars. 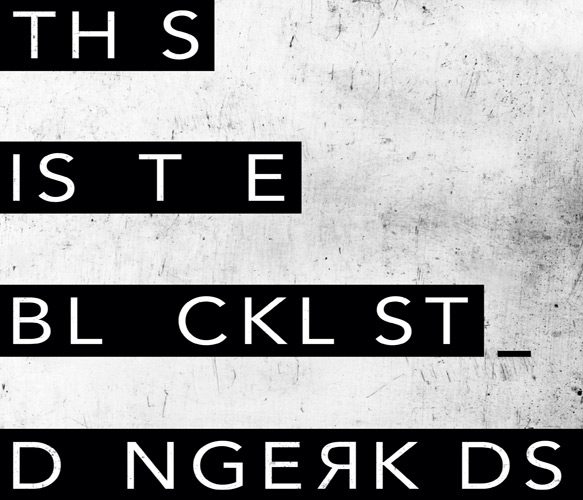 Dangerkids are currently on tour with Falling In Reverse, Motionless In White and Issues in support of blacklist_. Tickets are on sale now at theendisheretour.com