Daredevil – Into the Ring (Season 1/ Episode 1)

Marvel Comic fans are more than familiar with the superhero character called Daredevil, who first appeared back in 1964. Having been developed over years of stories, Daredevil made his live action film debut back in 2003 when Ben Affleck portrayed the iconic comic figure. Receiving mixed to positive reviews from fans and critics, many wondered if a new vision of Daredevil would ever follow. Now over a decade since the film director Drew Goddard (Cabin in The Woods 2012) launches a new web television series entitled Daredevil, available via Netflix. With a total of thirteen episodes scheduled for release beginning on April 10, 2015, the series’ debut season has been received so well that a second season is already in the works. In Netflix’s new iteration, Daredevil maintains nocturnal vigil over the streets of Hell’s Kitchen in New York City. 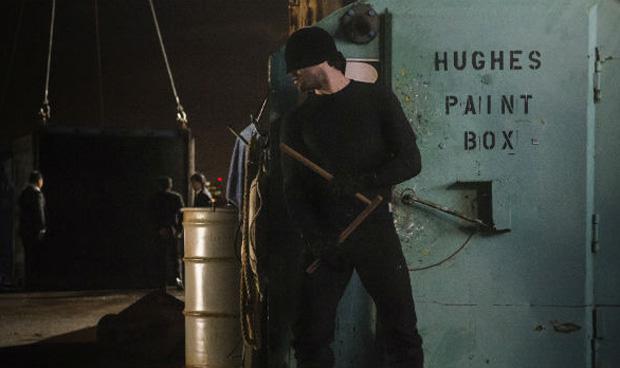 The pilot episode, Into the Ring, was directed by Phil Abraham (The Sopranos 2007, Mad Men series) and written by Goddard, begins with blind up and coming attorney Matt Murdock (Charlie Cox: Downtown Abbey series, Boardwalk Empire series) in a confessional telling a priest to forgive him for what he is about to do. Suddenly, three guys are corralling three girls to do their bidding at gunpoint when a masked man jumps down, disarms the assailants, and sets free the girls. When he speaks, he has Matt’s voice. The next morning, Matt’s woken up by a call from his friend, Franklin “Foggy” Nelson (Elden Henson: The Butterfly Effect 2007, The Hunger Games: Mockingjay-Part 1 2014) to come see a building he thinks would be good for the firm they want to start. The problem is, they have no clients until Karen Page (Deborah Ann Woll: ER series 2008, True Blood series 2008-2014), who was arrested when she’s found with a dead co-worker from a tip from a cop friend, Sgt. Brett Mahony (Royce Johnson: Forever series 2014, Madam Secretary series 2014). She’s confused about the whole mess; she just knows she’s innocent.  Next, it is learned that James Wesley (Toby Leonard Moore: Banshee series 2013, John Wick 2014) is helping with the cover-up of a money laundering scheme, so his employer, Wilson Fisk (Vincent D’Onofrio: Full Metal Jacket 1987,  MIB 1997), a hulking, extraordinarily violent businessman who has just about everybody in the city in his pocket, does not get implicated.  That night Karen’s attacked in her cell, so Matt and Foggy have to work out her release by threatening legal action on the city. 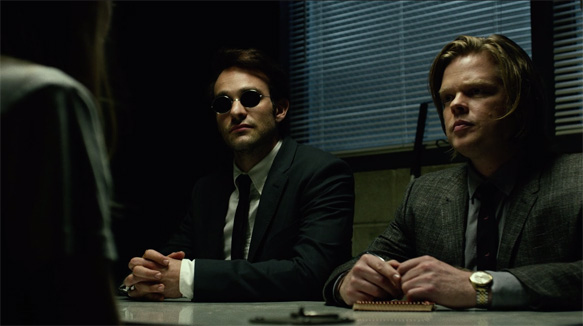 Matt offers her a place to stay when she says her place will be watched.  On the other side of town, Wesley’s associate (and Fisk’s pet) Lelend Owlsley (Bob Gunton: The Batman series, Family Guy series) is talking to heroin trafficker Goa (Wai Ching Ho: The Sorcerer’s Apprentice 2010, Affluenza 2014) and members of the Russian Mafia about the human and drug trafficking scheme from earlier, and that a masked man prevented them from fulfilling the transaction. As they talk and Matt sleeps, Karen goes back to her place to retrieve a slip drive, but gets attacked. She is saved by masked Matt. When he is momentarily stunned after he gets pushed out a window and down a fire ladder, it brings a childhood flashback of his dad telling him to not be like him, a fighter, and never give up on his schooling. Coming back to his senses, Matt neutralizes Karen’s attacker, taking back the slip drive  which Karen planned to use in order to bring down her company. She just got caught at the wrong place at the wrong time with the wrong date when she was found with her dead co-worker. In a montage of Matt training, Leland’s Russian Mafia pets’ operations get thwarted by the masked man, so they devise a plan to trap him by kidnapping the kid of the CEO of Karen’s company. 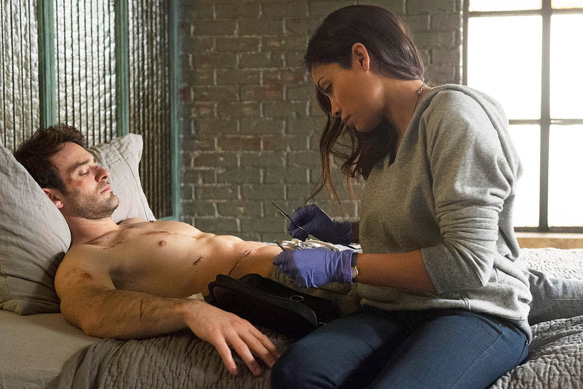 Daredevil could be considered to be book-ended by The Dark Knight trilogy (2005-2012) and the Blade trilogy (1998-2004) tonally with the dark, gritty city-scape, leaning more toward Blade for the gore.  The fight choreography by Philip J. Silvera (Star Wars: The Old Republic video game 2011, Resident Evil: Operation Raccoon City video game 2012) is extremely fast and furious. The characters are all given good bones with room to grow and evolve as the season progresses, and into future seasons.  CrypticRock gives Daredevil plot episode Into the Ring 5 of 5 stars. 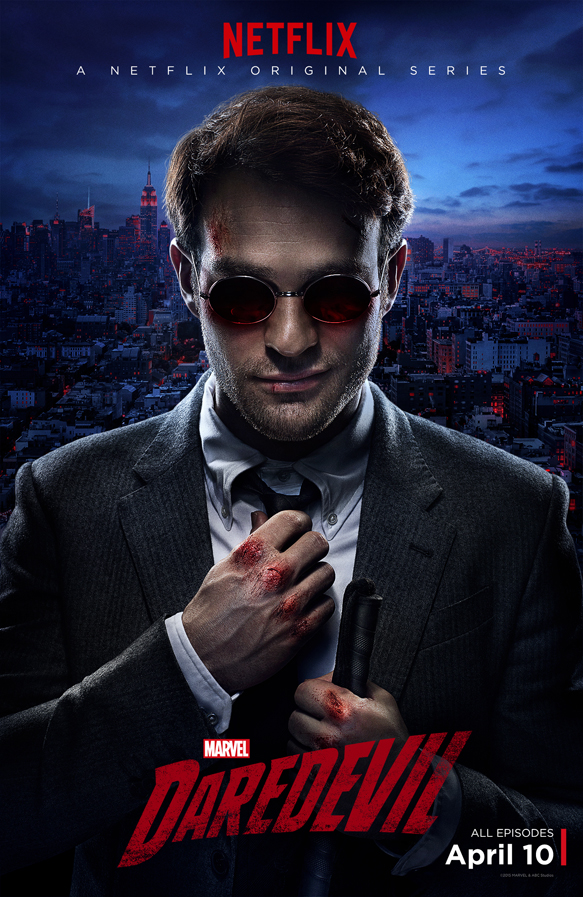