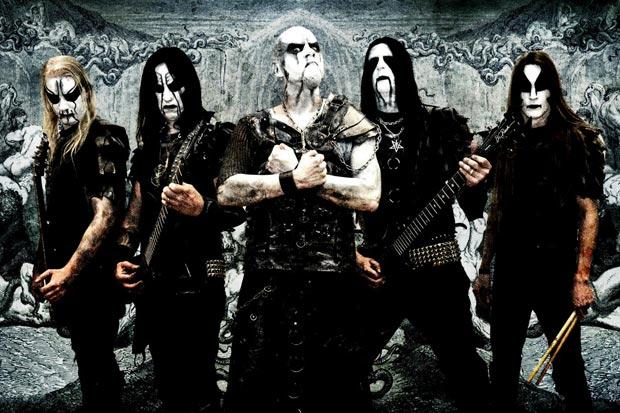 Emerging during the second wave of Black Metal, Dark Funeral brought a truculent speed and resilient energy with a focus on Satanic and Anti-Christianity themes that has led them to be referred to as Swedish Black Metal Kings. Founded back in 1993 by Lord Ahriman (guitar) and the late Blackmoon (guitar), after attaining success independently, many took notice, thus leading to the band’s official debut studio album, 1996’s The Secrets of the Black Arts. Since then, they evolved in numerous directions including a handful of lineup changes, however, maintaining a resilient attitude, along with melodies that continue to haunt and terrorize, Dark Funeral marches on.

In fact, after the release of 2009’s Angelus Exuro pro Eternus, Bassist B-Force and longtime Vocalist Emperor Magus Caligula left the band for good. This departure led Dark Funeral to take a short break in order to regroup until 2014 when they resurfaced with new vocalist Heljarmadr. With a name coming from the old Scandinavian phrase meaning, “a man belonging to hell,” it was the perfect introduction to his demonical vocal talent. With creativity recharged for Ahriman and the rest of the band, Chaq Mol (guitar) and Dominator (drums), their sixth studio album Where Shadows Forever Reign finally arrived on June 3, 2016 via Century Media Records.

Coming after over six years of silence, Dark Funeral coincidentally release the album during the same year as the twenty year anniversary of the aforementioned studio release of The Secrets of the Black Arts. In honor of their heritage, original cover artist Kristian ‘Necrolord’ Wahlin returned to craft the design for Where Shadows Forever Reign. Produced by Ahriman himself along with Daniel Bergstrand (In Flames, Dimmu Borgir) and recorded at the Dugout Studios in Uppsala, Sweden, Ahriman expressed excitement for this particular release as he continued to challenge himself with innovative riffing techniques.

The album begins with “Unchain My Soul” as a slow chime and guitar riff awaits for hell to break loose. The melody accelerates as small whispers are heard while it grows into torturous screams until the music blends in brutal delight. The riffs maintain with callous energy as the instrumentation summons darkness as though it is opening doors to the gates of hell, which is also confirmed in the lyrics, “I raise the dead, to claim my throne in hell.” The pacing slows down a bit towards the middle as it holds a differentiated engagement, yet this does not last long where the drums ruthlessly pick up for an ultimate speedy meltdown. Creeping in next with a slow distorted guitar riff is “As One We Shall Conquer.” There is a brief, brutal scream at the beginning which launches the demonical movement including the drums that continue to annihilate. It is another merciless tune that captivates the listener with its vicious growls and haunting riffs. The music shifts to a slow and terrifying riff as it picks back up while the lyrics continue to vocalize about embracing the darkness.

Where Shadows Forever Reign continues to spiral through the gates of hell as “Best of Man” softly enters with a soothing melody. This softness does not last long as it builds towards a violent-esque track filled with hatred from the inevitable pain life can bring. It is an ardent tune for listeners to release their own negative emotions. A slow atmospheric bell chimes in during the next “As I Ascend.” This haunting bell sounds similar to the countdown of death as a guitar riff eerily follows. The track is about being lost and alone in the darkness as the melody heavily builds. The listener could get lost in this song as it remains engaging with the hidden evil consistency. Entering another dimension of hell with “Temple of Ahriman,” it holds a force with distinguished riffs and callous vocals. It bleeds out an emotion of pure evil, where “no one survives from the temple,” however, the chorus adds a catchy hook. The drums  once again rip in during “The Eternal Eclipse.” It is another destructive track as it describes the experience of the demise. Moving in with the subject on sacrifices during “To Carve Another Wound,” it introduces unique guitar riffs.

Unraveling toward the record’s conclusion, “Nail Them To the Cross” hits with a distorted riff and an evil cymbal as though it is clocking its way to hell. The movement sways between a turbulent speed to a slow and torturous pace as it spirals with a demonic atmosphere. Saving the best for last with the title track, “Where Shadows Forever Reign” kicks off with no remorse. It is a song about self-sacrifice, where one must go into their personal darkness and accept their inner hell. These eminent flavors between lyrics, instrumentation, and staggering movements leads to an explosive conclusion.

Dark Funeral has officially returned with a refined darkened dynamic on Where Shadows Forever Reign. It is nine ferocious tracks that show no sign of sympathy. Heljarmadr adds a lively spirit to the group, where Ahriman worked closely with him on the lyrics and songwriting to accomplish a vehement return. It is a tremendous comeback where fans would not be disappointed and would readily accept the crisp vocals from Heljarmadr from the get-go. CrypticRock gives Where Shadows Forever Reign a 4 out of 5. 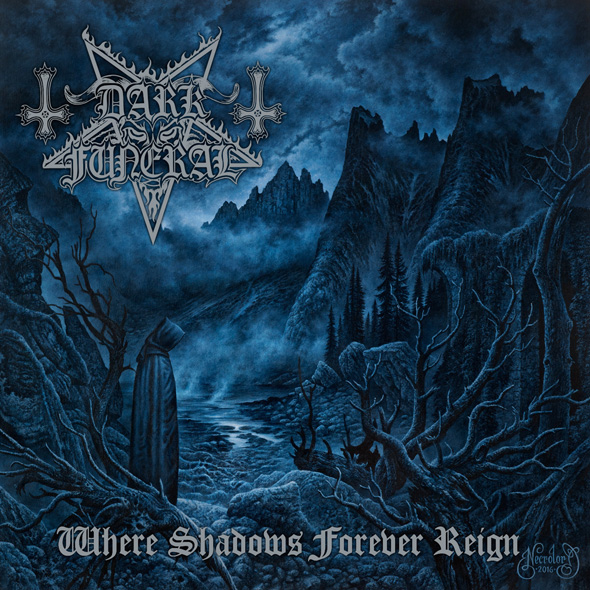