Once an enlightening haven, the world known as “Darken” has slowly become both a literal and figurative prison of fear; more so for those considered exilers and outsiders. It is a world that is sustained by the “blood” of a purported entity referred to as “Mother Darken,” and is controlled by only her most devout disciples. With Mother Darken’s presence being in question, her once faithful supporters are finding themselves exiled and at risk of becoming casualties in a deadly war for power perpetuated by propaganda. Nothing in the world of Darken is quite what it seems though. 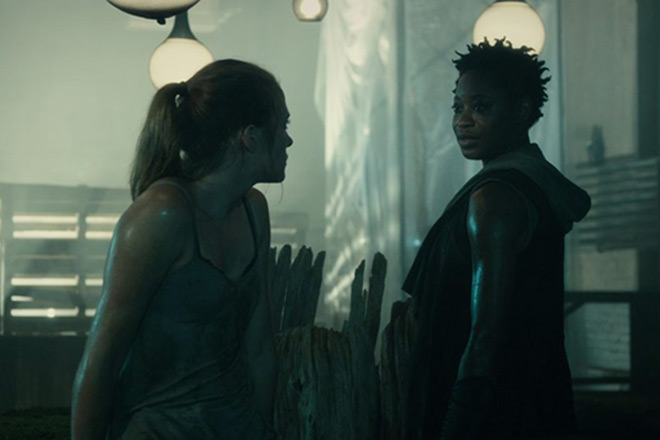 First having premiered back on November 26, 2017 at the Blood in the Snow Canadian Film Festival, directed by Audrey Cummings (Tormented 2014, Les jeux d’enfants 2008) and written by RJ Lackie (The Soliloquies of Santiago series 2015, Couple-ish series 2016), Darken is set for release on a broader scale come April 2018.

A Fantasy/Sci-Fi flick, it centers on Eve (Bea Santos: Coconut Hero 2015, Murdoch Mysteries series), a doctor who finds herself in the wrong place at the wrong time, as she happens upon a woman who stumbles out of a warehouse dressed in post-apocalyptic attire and sporting a stab wound. Eve enters the warehouse not knowing that she has actually been thrusts into this elaborate prison-system labyrinth of a world, Darken.

She eventually crosses paths with Kali (Olunike Adeliyi: Workin’ Moms series 2017, The Drop In 2017), an exiled survivor and guide along with Mercy (Zoë Belkin: Carrie 2013, The Story of Luke 2014), their deaf friend who she enlists the help of to escape the unfamiliar world. Unfortunately, she finds herself on the radar of a priestess named Clarity (Christine Horne: The Stone Angel 2007, How to Plan an Orgy in a Small Town 2015), and thus becomes a target of Mother Darken’s deadly disciples. Escaping will not be an easy task, considering nothing and no one can be trusted; but when the main priority is to just stay alive, beggars can’t be choosers. 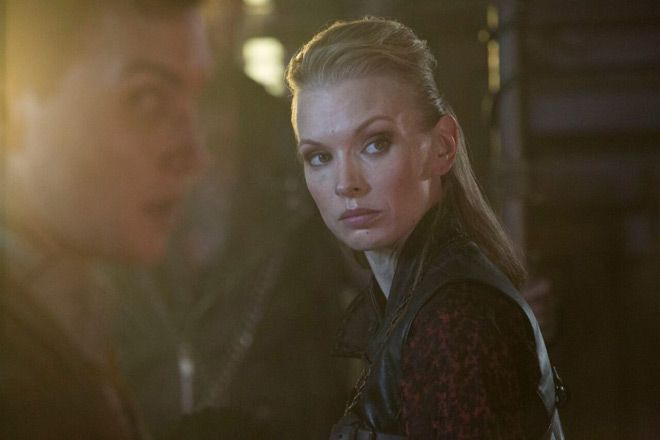 With a cast that also includes Dmitry Chepovetsky (Red 2010, Mission: Impossible – Ghost Protocol 2011) as orange-haired punk rocker Ralston, and Ari Miller (Orphan Black series, Rupture 2016) as devoted disciple Martin, while the premise of Darken appears to be intriguing enough, the concept actually outshone its execution. The chief complaint viewers may have with this movie is the constant feeling of being disconnected, which is likely the result of the overwhelming lack of cohesion and consistency. From the characters and plot, to the cinematography and costumes, the movie made it difficult to find more to commend it for than condemn. Most components of the film were actually either too much or too little, never quite reaching that happy medium that most moviegoers might prefer.

The characters were kind of all over the place – a high priestess dressed in leather and adorned with bullets, the over-the-top disciple wearing a very old-fashioned tuxedo, the ’80s punk rocker, the hippie chick, the out-of-place doctor, and the unbalanced blend of post-apocalyptic survivors and antiquated acquaintances. They were armed with dialogue that lacked any semblance of depth, and their depictions required more conviction and believability than what was provided. The one bright spot was found in Adeliyi’s performance, as she brought forth all that was missing in the other characters. Belkin also did a noteworthy job of playing Mercy, and she did not even have the luxury of getting to speak; which actually speaks volumes with regards to her acting.

Aside from the characters and acting, there were other elements that seemed to be deficient. The camerawork was somewhat problematic due to the unnecessarily shaky shooting during action sequences that left viewers feeling more gross than engrossed. There were attempts at sexually-charged moments that served no purpose to the story and failed to come off as anything more than awkward. The special effects were also disappointingly minimal. There was the continued theme of how the greedy pursuit of power will always cost more than can be gained, but even that was diluted by the confusion created by contradictions in the film’s story. The movie was basically just a missed opportunity, which was really the most frustrating thing of all. 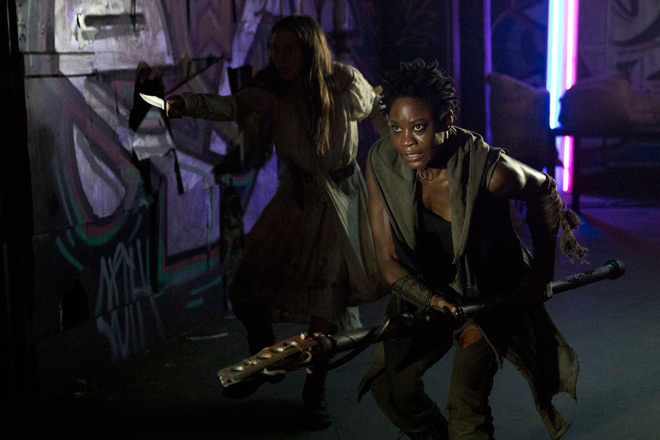 With a story penetrated by plot holes, slightly substandard cinematography, as well as the majority of the portrayals of the film’s rather insipid and inconsistent characters, Darken could only be described as “just missing the mark.” Darken appeared to be a more ambitious project than what was capably executable. That being said, the film’s few bright spots are unfortunately not enough to make up for its final cut of seemingly wasted potential, which is why CrypticRock gives Darken 2 out of 5 stars.