The French Black Metal scene has come on strong in recent years, and now there’s another clot of darkness from the south of France to add to an impressive and diverse heap of bands. Darkenhöld, from Villeneuve-Loubet near Nice, has been pouring out their hellish racket since 2008, in that time releasing some splits, appearing on tribute albums to Emperor and Enslaved, and producing two studio albums. Their all important third long player, Castellum, was released this past month on Those Opposed Records, and judging from the quality of songs contained within it, should gain Darkenhöld a substantial amount of traction in the metal community.

Equal parts epic, majestic black metal a la Storm of the Light’s Bane-era Dissection and  mid to late 90’s Gehenna, Castellum storms from the gates with the swagger and pace of the symphonic period of Black Metal’s second wave expansion. “Stronghold’s Eternal Rivalry” starts things off as the longest track on the album, coming in at just under eight minutes in length. It features a seamless blend of tempo changes and glorious leads, gathered around an adventurous template of effective and atmospheric riffs. “Le Castellas du Moine Brigand” features a mid-paced, keyboard driven melody underpinned with enough discernible riffing to keep the song heavy. Vocalist Cervantes’ enunciated scream is more of a growl, not a shriek, and is highly reminiscent of the aforesaid 90’s period of melodic European black metal. “Majestic Dusk Over The Sentinels” continues the mid-paced affair, but there are echoing spoken word parts as well, far enough back in the mix to avoid any cheesy Cradle of Filth-isms. A couple of early period Ulver/Arcturus ‘ohh ohhh’s’ feature in this song, upping the epic factor by several points.

Much like crossover (black/death/thrash) bands such as Sacramentum and Old Man’s Child, Darkenhöld employs a distinct sense of melody and adventurousness to go with the brutal moments. “Glorious Horns” features quite a bit of pre-battle pomp to the riffs, building tension around keys and guitar and is sure to get the heads banging among even the most sedate of listeners. This song is almost in the realm of a band like Equilibrium, with the keys and almost bouncy galloping rhythms putting the band somewhere in pagan metal territory. Darkenhöld’s adherence to themes of the Middle Ages, sorcery, darkness, Nature, and pagan mysticism fits the mood they engender on Castellum quite nicely, in fact, spurning the need to pigeonhole the French trio (Cervantes – vocals / Aldebaran – guitars, bass, keys, chorus / Aboth – drums) into any one genre.

“Foetus Obitis” is a one and a half minute interlude quite reminiscent of the dungeon music bands like Summoning and Dargaard used to churn out. Brief, but combined with the rest of the album, makes those who yearn for the mysterious, talented, yet simpler ’90’s era of experimental black metal feel a bit more sated. ‘Le Souffles De Vieilles Pierres’ hits the listener with speeding melodies and keeps up that wordless sense of sprawling adventure. An acoustic guitar solo about two minutes in, followed by a very medieval set of leads, hearkens back to the bygone ages of chivalrous, yet brutal pre-Renaissance Europe. Darkenhold conjure these atmospheres with some keyboards, yes, but the mix is just right. The guitars are never sacrificed. The metal is always first. When the blast beats come in, there is so much guitar and keyboard around it, but nothing ever gets muddled; it still sounds pleasingly heavy.

“L’incandescence Souterraine” sounds like something Kampfar might produce, while “Mountain’s Wayfaring Call” is as epic as the title makes it out to be. One can hear a bit of Windir threaded throughout this one. The pure galloping rhythms and epic melody of “The Bulwark’s Warlords” bring this album to a theatrical and amazing conclusion. A longer neo-classical outro track, “Medium Aevum” brings to mind the epic journeys of classic Bal-Sagoth pieces of similar ilk. One listen and you’ll be instantly transported to another, more ancient world beyond the shadowy borders of this one.

Though there have been many references to other bands here, these are in place mostly to paint a picture of Darkenhöld’s sound to those unfamiliar. Had Castellum come out in 1999, it might have gotten a little bit lost in the background, as the sound they have perfected on it may have attained its highest commercial peak right around that time. In today’s world of divergent genres, sub-genres, and with the recent rise in super orthodox black metal, pagan metal as its own separate thing, and the avant-garde maneuvers of some of that era’s greats, it is refreshing now to hear what Darkenhöld are doing. And that is bringing a fresh feel to melodic black metal, unafraid to use some classic sounding keyboards to add atmosphere but keep the heaviness. Strong enough to appeal to fans of many different colors in the extreme metal spectrum, Castellum is quite assuredly a smashing success. Light some candles and enter their world now . . . CrypticRock gives Castellum 5 out of 5 stars. 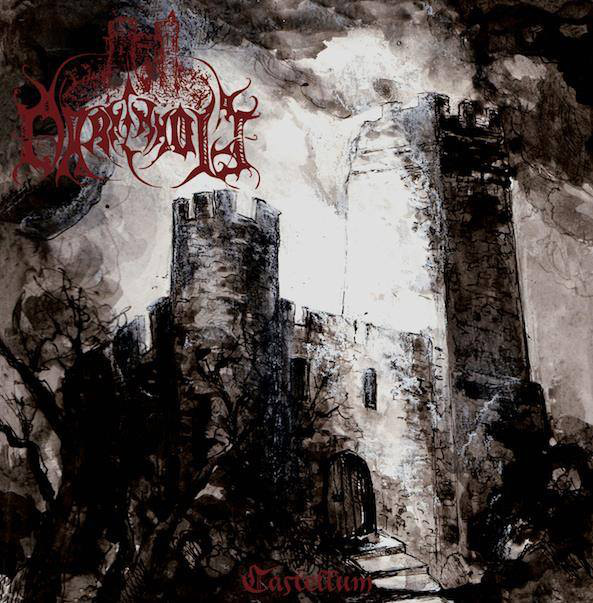