Ever been told the web is not safe?  Originally conceived based on the Japanese series Torihada, which began in 2010 and is currently shown on TV Asahi, Canadian series Darknet, released by Copperheart Entertainment and first aired on Canada’s Super Channel Halloween night in 2013, enforces the warning.  Airing for one full season between October 31, 2013 and March 28, 2014, Darknet began with a six episode run. Directed by six different directors and six different writers, it consisted of three or four shorts, each offering snippets of people’s lives being interrupted by vivid instances of unexpected violence or shocking strangeness that came together by episode’s end. The concept is much like the Creepshow franchise.  Darknet takes the “multi-story in one” aspect, and applies it to a killer website; a mysterious closed network of disturbing imagery and stories that exist just under the surface of our ordered and safe society, scenario; think Feardotcom (2002) or Smiley(2012).  As in Feardotcom and Smiley, Darknet was shot in a visceral style that cranks up the creep factor, then, pulls back and ups the ante for the episode’s end, often making viewers become part of the Darknet for the entertainment of other viewers. 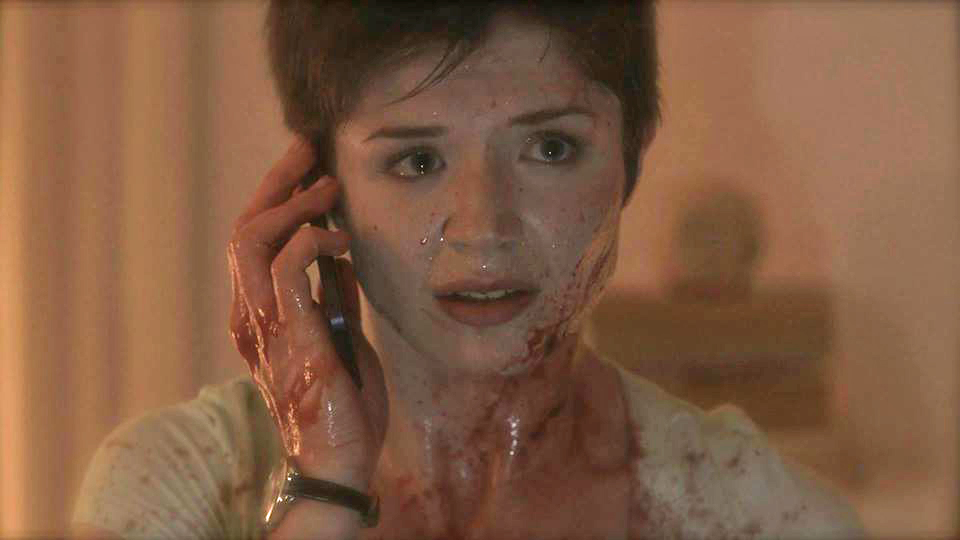 At the top of episode one, simply titled Darknet 1, written and directed by Vincenzo Natali (Hemlock Grove series, Hannibal series), a girl, Mandy (Masa Lizdek), is murdered by a hooded killer (Jonathan Goldapple: The Junction short, Covert Affairs series, both 2013).  This opening kill sets up viewers for the unexpected, to know no one is safe since it is outside, albeit in the dark.  The story then cuts to another girl, Alison (Michelle Alexander: Played series 2013), who comes home to her disturbed apartment.  She is so unsettled that she sets up cameras in her apartment, then sees someone outside her window.  She tells her friend, Linda (Tara Joshi: Warehouse 13 2013), but of course, it is not there when she looks.  Alison then goes to class but comes home early as it is cancelled.  She talks to Linda on her cell while she checks the cameras and sees a guy walking around…the timestamp is now.

The episode cuts to the next short, which ties into the opening. Featuring Lewis (David Hewlitt: Rise of the Planet of the Apes 2011, Splice 2009), a businessman divorcee, finding $50,000 in a random mail locker, he gets stabbed by an unknown junkie hidden in another locker (Miles Carney: House at the End of the Street 2012), who leaves with the money.  This sequence gives credence to the no one is safe theme that began at the top of the episode.  Cutting again to the final segment, Gord (Will Bowes: House at the End of the Street 2012) is sent a link for Darknet by his friend Jeff (Dewshane Williams: Defiance series).  Gord browses and answers a post on a bulletin board asking about how to dispose of a body.  He gets a text later saying info was sent to Japan, and that whoever wants to kill more with directions.

Clearly striking the interest of viewers, Darknet returned on February 28th 2014 with Darknet 2, thus continuing the series. Directed by Steven Hoban (A Christmas Horror Story 2016) and written by Pascal Trottier ( A Christmas Horror Story 2016), this episode begins with a police officer (Greg Calderone: Fir Crazy 2013, Manifold 2013) going door-to-door asking questions about a murder.  He gets invited in by an artist-type lady (Natalie Brown: Saw V 2008, Assassin’s Creed III: The Tyranny of King Washington 2013) who has interest in murders as she serves wine.  He declines the wine and devolving details.  She presses, and reluctantly, he says, “Knife” as she pulls one out.  She is not impressed.  He sees she is unimpressed, so he raises the ante giving more details.  She turns her back, apparently in indifference. 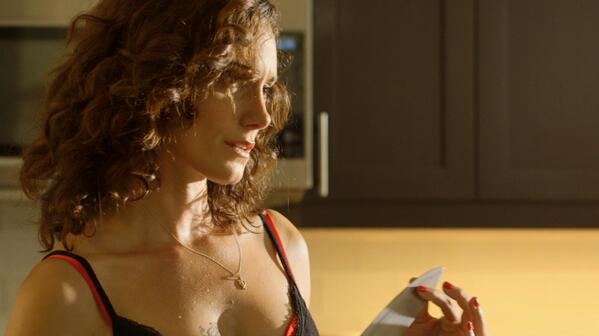 The second short of Darknet 2 opens with a guy named Darren (Kerr Hewitt: Scott Pilgrim vs. the World 2010, Max Payne 2008) walking by an electric substation, talking to his friend, Chris (Brett Ryan: Nikita 2011, Flashpoint 2012).  Chris gets a call, excuses himself, and hangs up.  Darren goes on to investigate the electric substation while Chris dates the artist.  After they part ways, Chris gets a text to go to the drink vending machine he sees and gets the envelope sticking out of the retrieval slot.  Inside is a pic of bra-covered breasts with directions for more; thus setting in motion a scavenger hunt that leads him to question his life.

Finally, the third short begins with a girl (Casey Hudecki: Nikita 2011) arguing on the phone.  She hangs up to take a shower. The story cuts to after her shower where she drops her robe to get in bed until she sees someone through the window.  Although unsettled, she decides to flash him, then, quickly gets dressed, opens the shades, and starts stripping for the unseen voyeur.  She stops in her bra and panties as it becomes eerily quiet.  After a wait, she decides to up the ante by beginning to touch herself, but she momentarily gets distracted by goings-on across the way, which changes her life forever.

The story flashes back to Darren, who is cooking but clearly distracted by incessant buzzing, then, the lights go out.  He calls to see what is up, but gets nowhere so he gets out a glow light to investigate.  What he finds is shocking. 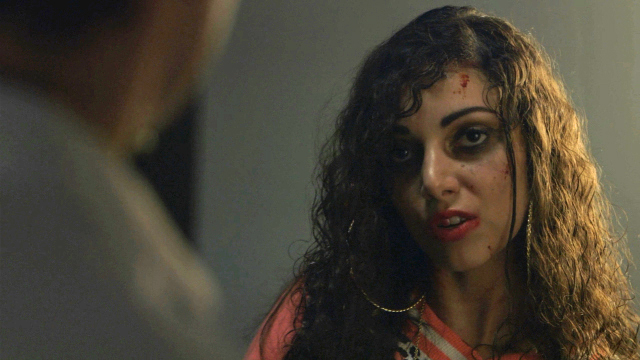 Episode three, Darknet 3, is directed by Brett Sullivan (Ginger Snaps 2: Unleashed 2004, A Christmas Horror Story 2015) and written by Doug Taylor (Splice 2009, A Christmas Horror Story 2015). Desmond (Shaun Benson: Home Sweet Home 2013, Defiance: The Lost Ones 2014), a businessman, is walking  brusquely; he is trying to get to a meeting. He has to stop at the light when he sees a guy (Jeff Kassal: Haven 2012) with bad teeth.  This man makes him feel uncomfortable as they run shoulder to shoulder.  Desmond realizes the guy is his doppelganger.  Desmond keeps checking his GPS.  He ditches the strange guy at the next light and finds the building.  Bad Teeth Guy catches Desmond anyway.  Bad Teeth thinks he and Desmond are racing, and that he has won…until…

Cut to Ms. Joanne Sato (Jeananne Goossen: The Vow 2012, NCIS: Los Angeles 2013) who is getting her phone lines inspected.  As the serviceman (Rob Ramsey: Patch Town 2014, The Thundermans 2014-2015) goes around the living room,  making small talk about the killer on the loose, speaking too much about family…almost going off the handle.  Reigning himself in, he makes an off-handed comment about closeness of family, while looking at a pic of Ms. Sato and her brother, saying to not take family for granted because one day they will be dead.  Secretly, she gets her taser as the radio talks about an escaped killer.

In the next short we meet a new babysitter. Heather (Samantha Weinstein: Carrie 2014) comes to the door, which is answered by a middle-aged mother, Mrs. Beal (Martha Burns: Storm of the Century 1999, The Skulls III 2004).  Heather is asked if she can handle special needs, which she gives her references.  Alarms are going off in the other room, which Mrs. Beal ignores offering tea, and the alarm eventually flatlines.  Heather is very uncomfortable.  The phone rings, and while Mrs. Beal answers, Heather investigates. When she goes into the nursery, the child is alive and grabs her.

They then cut to Joanne on the phone talking about being attacked, she does not like what she hears and hangs up, irritated.  She logs onto her email, checks out an advertisement for a Dr. Angela brochure.  She specializes in alternative depression treatment.  Joanne goes to the appointment, and when she gets off the elevator, she sees a random envelope lying at the door.  Inside are pics of rotted corpses.  She then gets another envelope that shows up at her apartment in the mail with more rotted corpses, and yet another set labelled brother…she throws up.  The final pic is them alive together.  She barricades herself in bed with a taser.  A new envelope gets slipped under her door with more dead pictures, the last of which is clearly her brother saying, “I would do anything for my brother.”  Her life is changed forever.

Desmond, in the last part, calls an escort service he finds on the net, and asks for Betty after a day of meetings.  Betty shows and is clearly not what he asks for from the pic on the site, so he dismisses her.  He calls and gets sent another girl.  The same girl shows, and now he is really mad.  He gets offered a third, and while he waits, he logs on to Darknet and sees Mrs. Beal with her child.  She takes off its oxygen mask; it seizes and dies.  This new girl, the same girl, comes.  As Desmond calls to yell at the dispatcher, the dispatcher yet again calls the escort Desmond was supposed to be getting as they are on the phone together.  She does not answer, but the escort’s phone rings.  Desmond is in for the night of his life…or is he?

Making a series such as Darknet, in the multiple short into one cohesive story, in under a half hour format is a tall order.  Characterization, pacing, and continuity is solid or suffers from episode to episode depending on the given episode’s director’s and writer’s strengths or weaknesses in the first part of the pilot season.  The cinematography is solid from episode to episode, giving a foreboding, creepy feel throughout, even in the well lit sets.  Not knowing who Darknet’s webmaster is, or whether it is an entity of itself, is the carrot on the stick that makes the viewer come back for more.  Like passing an accident on the road, one just has to look.  Log onto Darknet, and the viewer just might become part of the show.  CrypticRock gives the first part of Darknet’s pilot season 4 out 5 stars. 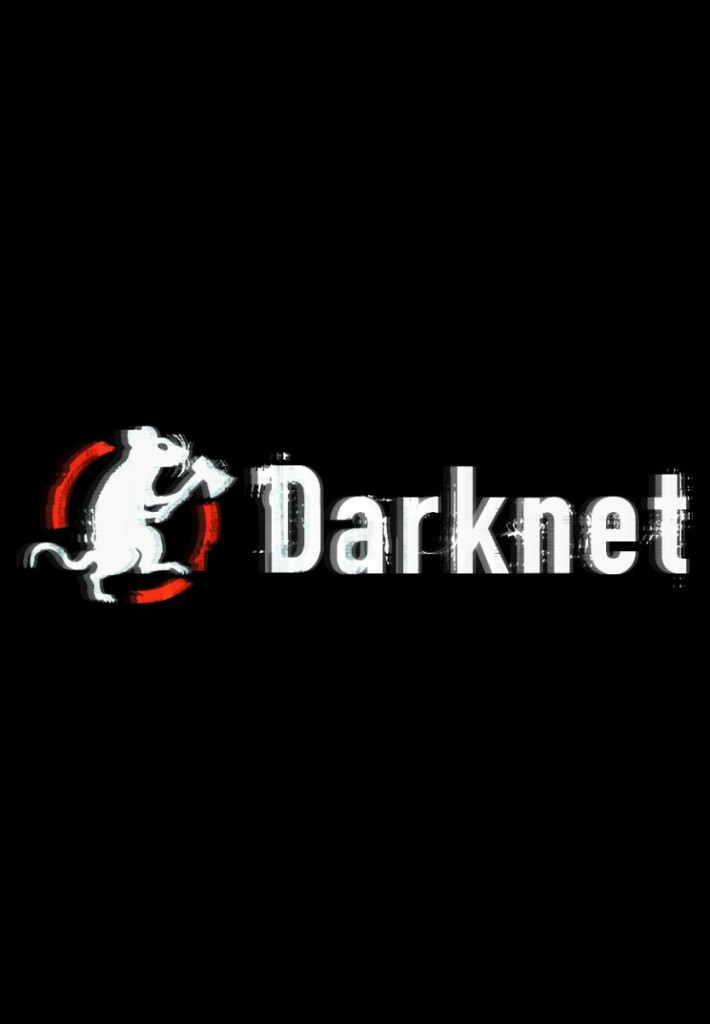 For more on Darknet: darknetfiles.com