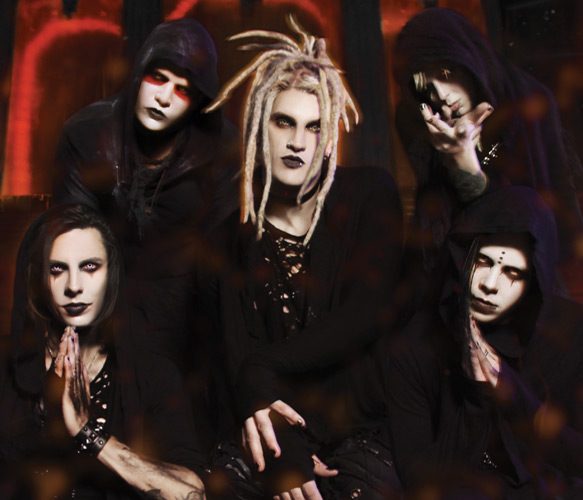 Davey Suicide is not the newest Suicide Girl, no: he is a musician who performs self-proclaimed “Gutter Goth Rock” from the streets of “UnHolywood Killafornia” (that is a song, folks). His latest album, Made From Fire, will begin to incinerate ears on March 24, 2017 via the band’s new label Auto-Production.

Beginning their journey in 2010, Davey Suicide and co. – his band currently consists of Guitarist Niko Gemini, Bassist Derek Obscura, Drummer Drayven Davidson, and Keyboardist Needlz – would play a series of high-profile gigs around Hollyweird that would garner the attention of several Indie labels, as well as Linkin Park’s former manager. The hype surrounding Davey Suicide would lead to a record deal in 2012, and the release of Davey Suicide’s debut, self-titled studio release in 2013. This was quickly followed with 2014’s sophomore effort, World Wide Suicide.

When it comes to Davey Suicide’s music, think Industrial Metal meets Gothic/Horror Rock with clear elements of Glam Rock and some Rap influences, as well; all of this in the ilk of bands like the Murderdolls/Wednesday 13, Marilyn Manson, Orgy, etc. Suicide believes that Rock is far from dead: “Rock fans haven’t gone anywhere,” he explains, “they just need a reason to fall in love again.” Fall in love they have, and it has kept Suicide out on the road, touring relentlessly. His commitment to touring is impressive and in just the past five years alone, Suicide and his cohorts have performed as a part of some 16 tours, performing over 330 shows on two continents.

There was an unfortunate issue with Suicide’s former record label that kept the performer locked in litigation for nearly a year, but that was 2015-2016 and this is a triumphant 2017 for Davey Suicide as they unleash a fourteen-song collection that ranges from Hard Rock to Electronica, Industrial to Rap, this is an eclectic and excellent sonic journey.

Made From Fire begins with a sonic baptism that builds upward to find Suicide uttering the phrase, “We’re made from fire.” This sound is echoed in first track/single/video, “Rise Above,” a massive-sounding, intricately-layered production. The influences here – as with the entirety of the album – range from Rap to Rock, electronics to hair. This is stadium-worthy sonics that promise, “You’ll never get to me.” When the odds are against you, rise with Suicide!

There is a defined ’80s influence that entices the listener to shake their cherry pie and shout at the devil to tracks like “Dancing with the Reaper,” and while power ballad “No Angel” is not on par with the bulk of the album’s tracks – it does contain one killer guitar solo that harkens back to those days when Rock contained sex, drugs, and mascara.

With a Rap breakdown from collaborators Twiztid, the deliciously dastardly second single/video “Too Many Freaks” is set to become the new anthem for the freaks of the world. In fact, when Suicide cheers “Freaks do it better now, didn’t you know?,” the freaks of the world will rise up from their tents to crown this man their king. He’s going to have to find some more circuses promptly if he hopes to escape unharmed!

Britney wants to be hit, baby, one more time. Silverchair wish to be abused, Nirvana wanted to be raped and not to be outdone, Davey Suicide wishes to be tortured. “Love the way you pleasure me, love the way you torture me,” he urges alongside a sexy, bass-heavy groove. With a touch of gang vocals and those catchy taunts, it is pretty safe to say that the ladies will be rushing to the front of the stage when this track goes live. Suicide does not linger in bed all day, though, and he picks back up with a gently political message: you have to be pro-revolution and anti-system if you want to be a rock-n-roller, so Davey jumps on board that raucous bandwagon with “Anti-System Revolution.”

Those who do know William Control (hint: Aiden), please stop reading this review right this second and go Google the man’s infinitely amazing music and then return. Ok, now we can discuss “Paralyzed,” where William joins in to chant the verse: “You lift me up, my fallen angel / You make it so I don’t feel anymore.” This could be a love song or a drug song, or a love song for drugs. Take your pick! Whatever your interpretation, this is a great collaboration between two superbly-talented musicians who refuse to be pigeonholed by a sole genre.

There is no light without the dark and Davey Suicide knows this all too well on “No Place Like Hell,” while “Devil’s Night” begs you to raise your horns up high and celebrate those human monsters hiding under your lids (and in your closet). Oh my Goth, it is fun! Of course, Davey Suicide is not all fun and games, and he turns the tables toward the serious with an emotional plea for one day that is pain free; “Take the Pain Away” admits that we are all addicts in some form or another, simply searching for our freedom.

Meanwhile, “The Chemical In You” is a sensual celebration of vice and teaches you how to spell “c-h-e-m-i-c-a-l,” so see, this is an informative album, kids. Admittedly, title track “Made From Fire” does contain some controversial lyrics (most notably, “We’re faggots in a world that’s straight”), though the overall intention here is positive: “Those who stand for nothing fall for everything,” as Alexander Hamilton noted (but not on Broadway). Be a phoenix, rise from the ashes, and let the sheep burn! The album ends on a reflective note with “End of the War,” a track that encourages listeners to survive but never surrender.

With allusions to the The Wizard of Oz and Alice In Wonderland, one cannot help but feel that Davey Suicide is truly crafting his own modern, musical fairy tale on Made From Fire. Standout chapters include the inspirational push of “Rise Above,” fabulously fun “Too Many Freaks,” and the title track, “Made From Fire.” There are moments where Made From Fire wanes, but overall, the musicianship is superb and, lest you forget, it is only Rock-n-Roll! 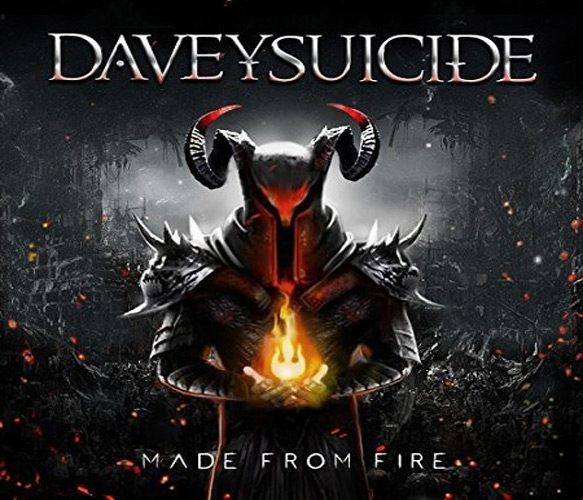