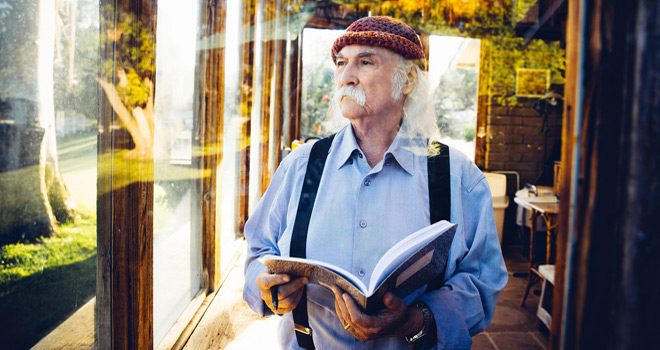 One interpretation of David Crosby’s six-decade career in popular music is that he is a living legend, and that would be true. Now at 76 years old, Crosby has been associated with some of the most iconic Folk Rock acts since the mid-1960s. From early success with The Byrds, with songs like “Turn, Turn, Turn” and “Mr. Tambourine Man,” to the harmonic paradise of Crosby, Stills, Nash and (sometimes) Young on songs like “Our House,” “Ohio,” and “Suite: Judy Blue Eyes.”

Another more cynical take on Crosby is that he has very successfully ridden the coattails of better artists for the last fifty plus years. To this point, The Byrds’ success was mostly due to covering the songs of other writers. “Turn Turn Turn” was written in the 1950s by Pete Seeger, and “Mr. Tambourine Man” was written by Bob Dylan. Crosby, Stills, Nash’s best songs were written by Stills, Nash, and Young, but not Crosby. Add that to Crosby’s reputation as a curmudgeon whose disagreeableness has caused decades-long fallings out with members of The Byrds and Crosby, Stills, and Nash, it is hard to imagine his success.

Regardless of one’s opinion of Crosby’s career, there is no disputing that he sings with the voice of an angel. Even at his advanced age and after years of substance abuse, Crosby’s voice is worth the price of admission.

On Sky Trails, his most recent album, out September 29th on BMG Records, Crosby’s voice is the highlight once again. A follow-up to 2016’s Lighthouse, Sky Trails marks Crosby’s sixth overall solo album and his first through the folks at BMG Records. Produced by James Raymond, the 10 track album opens with what can only be described as a tribute to late ’70s Steely Dan on the song called “She’s Got to Be Somewhere.” Crosby croons and harmonizes on the track while the players get funky on keyboards and horns. A good start, it is a song certain to find its way into elevators nationwide later this month.

One feature of Crosby’s music from his earliest days has been a kind of left-wing political activism and a cantankerous distaste for the current state of political affairs. “Capitol” is a prime example of this tendency with biting lyrics like, “And you think to yourself, this is where it happens. They run the whole damn thing from here.  Money to burn, filling up their pockets. Where no one can see and no one can hear. And the votes are just pieces of paper. And they sneer at the people who voted. And laugh as the votes were not counted. And the will of the people was noted, but completely ignored.“

Furthering his point, “We have the worst congress we’ve ever had,” says Crosby unreservedly in a recent NPR interview. “They are bought, paid for, and they behave abysmally. I couldn’t resist writing as critical a song as I could manage about them. ‘What Are Their Names’ is talking about how the corporations own and run America, ’cause they own Congress. That’s not a democracy, that’s a corporatocracy. ‘Capitol’ is in the same spirit, but it’s aimed specifically at Congress.”

Politics aside, the highlight of Sky Trails is Crosby’s cover of the classic Joni Mitchell song “Amelia.” Here, accompanied only by a piano, Crosby’s voice is the focus. For a moment, listeners are gifted a glimpse of greatness. This is why Crosby, despite all his flaws and critics, has been a successful musician for over fifty years.

The last few tracks on the album, particularly “Curved Air,” with a jaunty Spanish-guitar flair, and “Home Free,” an airy swim through Crosby’s stream of consciousness, are somewhat self-indulgent and some listeners may feel like they are only on the album to fill space, but again, that is based upon personal tastes.

Thoroughly busy with other projects, David Crosby has released six solo albums since 1971. Three of them have come since 2014. The other three had gaps of at least a decade. Having moments of brilliance, one is left to wonder whether Sky Trails was necessary as a full-length album or if an EP would have sufficed. For these reasons, CrypticRock Give Sky Trails 3 out of 5 stars. 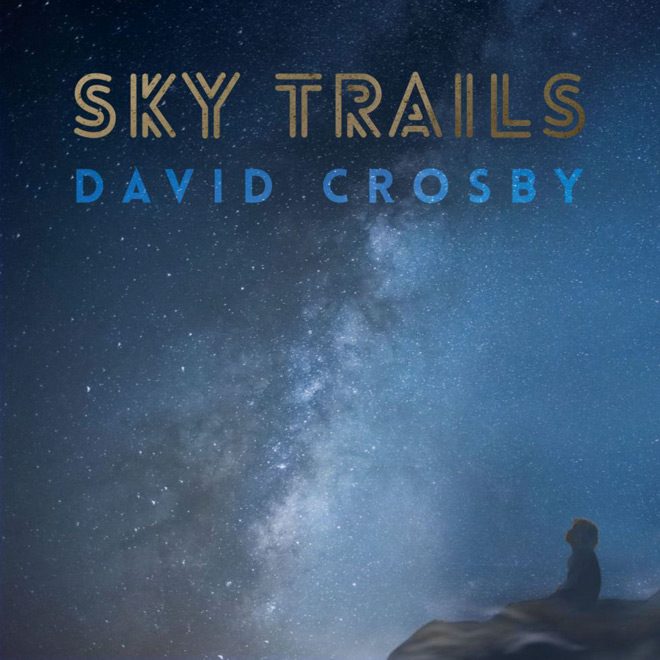 David Duchovny – Gestureland (Album Review) Melissa Etheridge – One Way Out (Album Review)
Like the in-depth, diverse coverage of Cryptic Rock? Help us in support to keep the magazine going strong for years to come with a small donation.