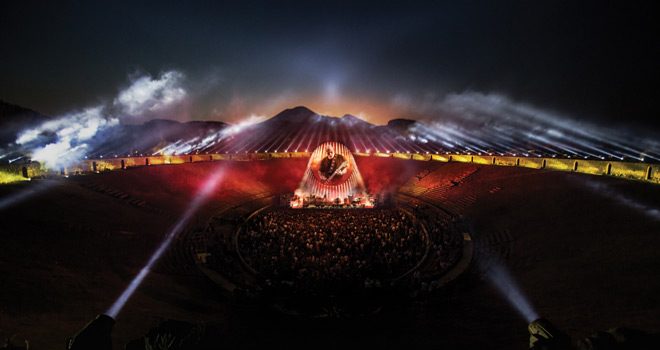 When David Gilmour performed at the Pompeii Amphitheatre on the 7th and 8th of July 2016, on tour in support of his 2015 album Rattle That Lock, history was made. Why you may ask? Well, it marked only the second time a concert had been put on there in front of a live audience since 79 CE, when Mount Vesuvius erupted and buried Pompeii, and its neighbor, Herculaneum in pyroclastic ash. The eruption killed an unknown number of people, buried the surrounding area under up to 75 feet of ash, and led to the abandonment of both cities.

And while Gilmour did perform there in 1971 for Adrian Maben’s concert film, Pink Floyd Live At Pompeii, it did not include an audience. The band would not allow anyone in the stands to bear witness. Thus, the July 2016 performances were the first public spectacles in the amphitheater in almost two millennia. Pretty interesting right? Gilmour thinks so and the significance of the performance was not lost on bit on him. In fact, when recalling the event, he told Rolling Stone, “It’s a magical place. I was slightly overwhelmed… It was quite overwhelming really. It’s a place of ghosts …in a friendly way.”

Now, all fans are well aware the original lineup of Pink Floyd has not performed together since 1968, after the departure of Syd Barrett, though Pink Floyd’s greatest critical and commercial success came between then and Gilmour and Roger Waters’ acrimonious split in 1985. The band (without Barrett) reunited for a one-off performance in 2005 for Live 8, otherwise, they have not performed together since 1985. Considering the rancor between Waters and Gilmour, and with the death of Barrett in 2005 and Wright in 2008, it is unlikely that any further collaboration between the two driving forces behind Pink Floyd will materialize.

Fortunately for those who could not make it to Pompeii back in July of last year, the concert was captured on video, shot in 4K by Director Gavin Elder. Stunning visually, the film was shown for one night only back on September 13th of this year at over 2,000 cinemas worldwide. Still, what about the people who could not make it to the theater to bare witness? Have no fear because on September 29th Columbia Records released David Gilmour’s Live At Pompeii on double CD, Blu-ray, double DVD, a Blu-ray/CD deluxe boxset, a four LP box set, and HD downloads. Is that enough media options for you?

This in mind, for the 2017 performance, Gilmour’s support consisted of a number of players; longtime collaborators Guy Pratt on bass and Steve DiStanislao on drums, keyboardist Chuck Leavall, Chester Kamen on guitar and João Mello on saxophone; with Bryan Chambers, Louise Clare Marshall and Lucita Jules on backing vocals. This assembly of musicians has a strong chemistry. They play together well and their efforts easily do justice to the historic venue.

The performance opens with renditions of several of Gilmour’s solo offerings, “5 A.M.,” “Rattle That Lock,” “Faces of Stone,” and more. After a solid warm-up, the band broke into some Pink Floyd standards. To close out the first set, they played “Wish You Were Here,” “Money,” and “One of these Days.” Gilmour and company faithfully performed the Pink Floyd numbers with very little, if any variation on the originals, as expected. Gilmour’s voice has suffered very little from the years that have gone by since the original recordings. On “Wish You Were Here” Gilmour sounded exactly as he had four decades ago when it was recorded.

The real highlight of the show was the second set though. It opened with “Shine On You Crazy Diamond,” arguably Gilmour’s greatest contribution to the world of popular music. When the opening bars of the song began, the usually subdued crowd gave out a roar, and, though they continued to behave well, their excitement was captured on tape. The second set included a few more songs from Gilmour’s solo career, including a “On an Island” and “Today.” Understandably the audience had a little less energy during those performances as the solo albums are far less known than Gilmour’s work with Pink Floyd. That said, the band’s performance on these songs was perfectly acceptable.

The second set continued with some Floyd deep cuts, like “Sorrow” and “Fat Old Sun.” The audience may have been a bit less enthusiastic about these non-single tracks being played, but when Gilmour and company closed the show with three more of Floyd’s most recognizable songs, including a legendary ten-minute version of “Comfortably Numb” they were satisfied.

Though in his seventies, and without the rest of his legendary band, Gilmour did justice to a venue that had not seen a performance in nearly two thousand years. The audience was treated to something magical, and the friendly ghosts in the amphitheatre had the opportunity to see what all the fuss was about. For being just as good as the album, even forty plus years later, CrypticRock give David Gilmour’s Live at Pompeii 5 out of 5 stars. 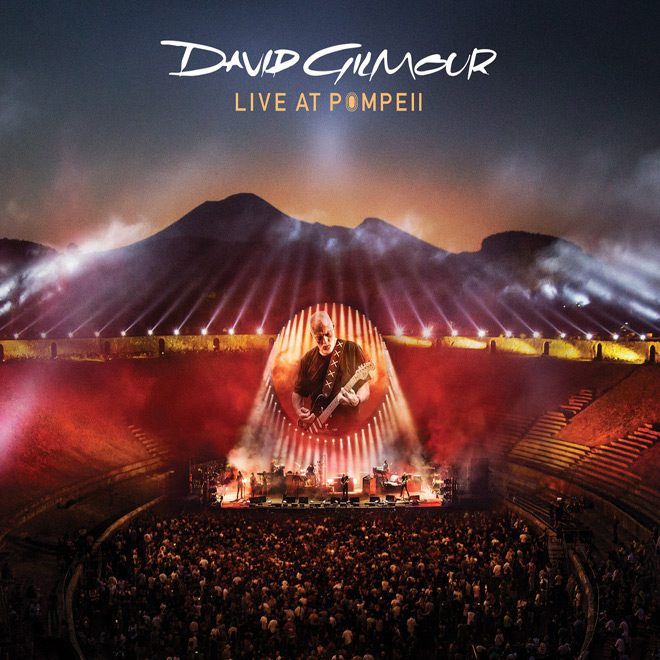