George A. Romero’s 1985 film Day of the Dead is perhaps not the best of the initial Living Dead trilogy, yet for a zombie film it is not that bad. Its plot about humanity barely surviving underground as the world is overrun by zombies is interesting, as are the attempts to civilize a zombie called ‘Bub’ (Sherman Howard: Lethal Weapon 2 1989, Debating Robert Lee 2004). Plus seeing its human villain Captain Rhodes (Joe Pilato: Wishmaster 1997, Digimon: The Movie 2000) get torn up is a famously gory piece of cinematic retribution. 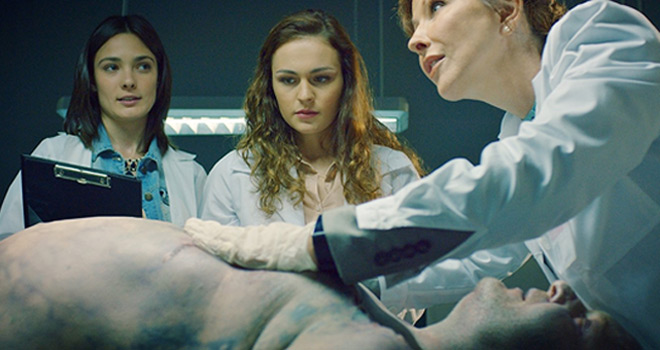 So why is there a remake or, rather, why were there 2 remakes and a prequel? There was 2005’s Day of the Dead 2: Contagium which was released as the official prequel around the same time as Romero released Land of the Dead. Then 2008 saw the first Day of the Dead remake with Mena Suvari (American Pie 1999, Spun 2002) and Ving Rhames (Pulp Fiction 1994, Guardians of the Galaxy Vol. 2 2017), which aimed to pay homage to the original’s plot while “(putting) a fresh spin on it”, according to its screenwriter Jeffrey Reddick. It is safe to say it did not work, with Steve Barton of DreadCentral.com giving it 2/5 stars, and DVDTalk giving it 0/5 stars. However, perhaps one of its cast members would do a better job of revamping it?

All this in mind, Day of the Dead: Bloodline is due out in select theater, as well as on VOD and Digital HD, on Friday January 5th, 2018 via Saban Films. It has been in the works since 2013, after Lati Grobman (Righteous Kill 2008, Stonehurst Asylum 2014) and Christa Campbell (Boyka: Undisputed 2016, Hellboy 2018), who starred in the previous remake, got the rights to the property. In an interview, Campbell said “We want to keep it as close to the Romero version as possible. To make sure that his fans are happy. These are not going to be zombies climbing walls and doing back flips like in World War Z (2013).” That said, some changes were expected as the project was described as ‘a modern-day retelling’ at first and then as a ‘reimagining’.

Mark Tonderai (Hush 2008, Gotham 2017) and Lars Jacobson (Baby Blues 2009) wrote the screenplay, with credit to Romero for reusing his characters’ names. It is also the second feature-length film for Director Hèctor Hernández Vicens (The Corpse of Annabel Fritz 2015), after writing many others (Phoenix 11-23 2012, 39+1 2014). Campbell-Grobman Films and Nu Boyana Film Studios handled the film’s production.

It has a similar plot to the original: a viral outbreak devastates the world and turns most of humanity into zombies. The survivors take refuge in a military base overseen by a few soldiers. These include the Salazar brothers Miguel (Jeff Gum: How to be a Female Director 2012, The Forgiven 2017) and Baca (Marcus Vanco: Unbroken 2014, The Shannara Chronicles series); Alphonse (Mark Rhino Smith: Zootopia 2016, Security 2017); and former med student Zoe Parker (Sophie Skelton: Blackbird 2016, Outlander series). The Salazars and co. keep the zombie threat away, while Parker tries to figure out a way to fight the virus. 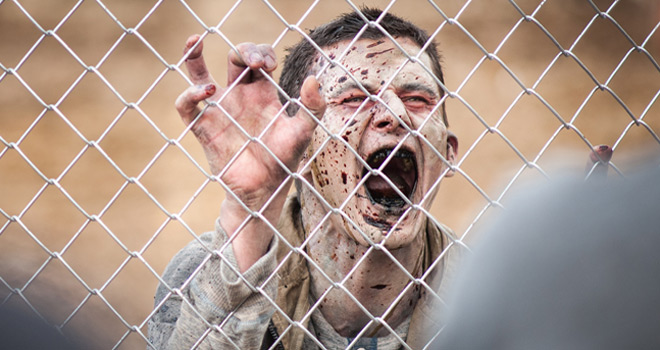 Some fans may have noticed a few new names there. Skelton’s Parker is like the original’s Sarah Bowman, only Vanco’s Baca plays the love interest. Gum’s Miguel acts as Rhodes’ replacement in being the authoritarian leader. While Bub has been replaced with Max (Johnathon Schaech: Legends of Tomorrow series, Prom Night 2008), the undead version of Parker’s former stalker. Also, the zombies are called ‘Rotters’, which feels more like an insult from a 1940’s Ealing Studios comedy.

These changes, alongside other differences, are not enough to call it bad though. If anything, they can help a film stand out on its own- like John Carpenter’s 1982 film The Thing over Howard Hawks’ 1951 film The Thing from Another World. In some cases, they could even surpass the original, like Steven Soderburgh’s 2001 Ocean’s Eleven over Milestone’s 1960 Rat Pack vehicle. But does Bloodline manage to do either? Can it out-Romero Romero? Well, let’s see where it matches up first.

The gore effects are on-par with the original at least; and it is hard to imagine them getting any more visceral without getting ridiculous. It treads a fine-line between gross Horror and Parody. The makeup and design for the zombies is convincing enough too: it is nothing people have not seen before but they are a fair portrayal of the living dead. They run but they do not back-flip, so they live up to Campbell’s promise. There is not any wall-climbing either, though Max does climb into an air vent. He is different from the other Rotters though, as the plot eventually explains. 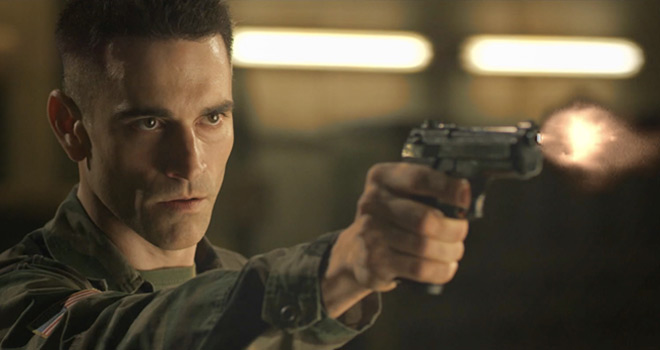 That is if viewers can get that far, as the film has some significant drawbacks. The acting is average overall, with Gum and Schaech putting in the best performances. Vanco and Skelton are shakier in comparison, falling victim to some weak line reads. Lorina Kamburova (Leatherface 2017, Death Race 4: Beyond Anarchy 2018) is the worst of the bunch as Parker’s friend Abby, though thankfully she only appears in the opening.

The story does not hold up to scrutiny either. Parker’s plan to stop the zombie plague involves taking risks, while Miguel wants to maintain base security. The gist seems to be that the inability to compromise between those ideals leads to trouble ahead; yet as it plays out, it feels more like one person’s bad decisions ruining things and it is not the antagonist. For a risk versus reward tale, the road to the reward is a rocky, stupid one.

Some could call it one of those ‘turn-your-brain-off’ films: to just enjoy the action that plays out on-screen. The zombie designs and gore effects work, while the camerawork is okay if unremarkable and the soundtrack is likewise. However, there are a lot of zombie films, books, TV series and video-games that deliver much better on those fronts. It may be a step-up from the 2008 remake but when it comes to Day of the Dead, accept no substitutes. Ultimately,  Day of the Dead: Bloodline is dull and does not have much going for it. For these reasons, CrypticRock gives this film 2 out of 5 stars. 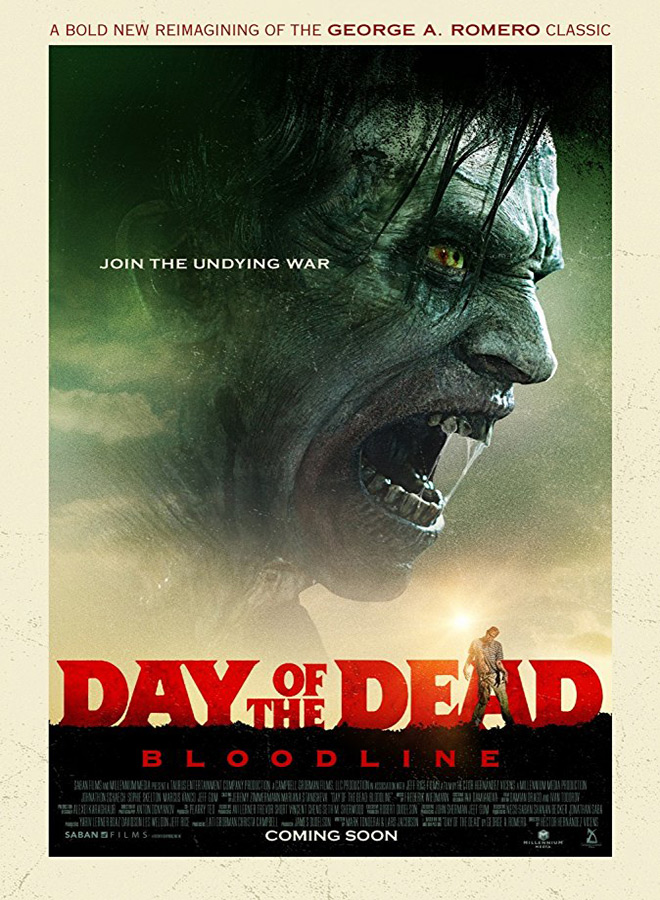 Pre-order Day of the Dead: Bloodline on Blu-ray: