Day of the Dead – A Horror Classic 30 Years Later

When George A. Romero released the third film in his Dead trilogy, fans were chomping at the bit to find out how civilization was dealing with unending hordes of the undead. Released thirty years ago this year, Day of the Dead hit theaters on Friday July 19, 1985, nearly seventeen years after Romero introduced audiences to the flesh-eating ghouls that attacked poor Barbra in the cemetery with Night of the Living Dead. Unlike most sequels, Day of the Dead takes place in the year it was actually filmed, implying that the zombies had been roaming the earth for almost two decades before the events in the bunker took place.

Although Romero made three more films after Day of the Dead– Land of the Dead (2005), Diary of the Dead (2007) and Survival of the Dead (2009), it could be argued, none of them had been part of Romero’s original vision. Since mostly different characters and situations are used in every film in the series, and the only continuation is the epidemic of the living dead, the movies are not considered sequels to each other. Each film is weighed down with social commentary on topics coinciding with the times, ranging from racism, to consumerism, to the hubris of man. Romero calls Day of the Dead a “tragedy about how a lack of human communication causes chaos and collapse even in this small little pie slice of society.” With the only constant being the living dead, each film shows how different people from different walks of life all react and deal with this unworldly situation. 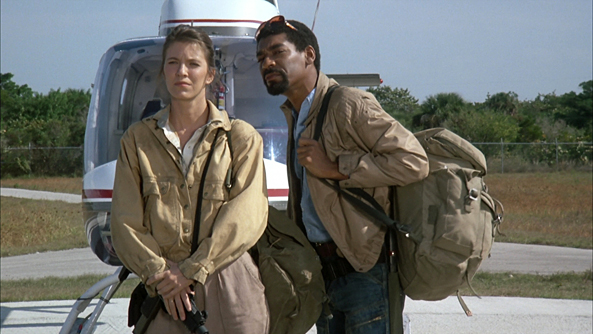 The film stars Lori Cardille as Sarah, whom Romero had discovered as she performed in Craig Lucas’ play, Reckless. Says Cardille during an interview with CrypticRock, “Rachel Fitzsimmons was the name of the character I played, she just took the stage and she never got off. The character was very complicated, up and down and all around. He was in the audience and he said, ‘There is a part for you. I would like you to do this.’ That was how he knew I could carry something like this. That is when he offered me the role. I did not audition or anything. George saw me in that play.” On her character, Cardille added, “On stage, I played a lot of strong women. Going into playing Sarah was an extension of that for me. It was a time when Alien (1979) was around with Sigourney Weaver. It was a time for women to shine. It is such an honor and I am so grateful. A lot of the women who are in film school, they are getting their PhDs, and they will study Sarah and the complexity of her character. I am thrilled to have been a part of that. I am very honored.”

Terry Alexander, who plays the Jamaican helicopter pilot, had this to say to CrypticRock, “I heard they were looking for someone to be in a George Romero movie and he wanted someone who could do a Caribbean accent.  I said, ‘I can do that.’ He handed me a monologue and it was so fantastic.  I told him, ‘George, you have to give me overnight on this, I have to sleep on it and dream about it.’ He said ok, and directors usually do not say that. It was a wonderful experience right there.  So I came back the next day and I did the monologue for him. He so enjoyed it and he said, ‘I am going to call your agent.’” 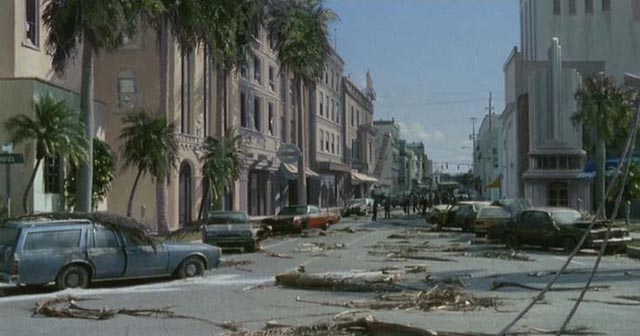 As for the Zombie extras, not only did they get to appear in a Romero movie, but they also got a cap that said “I Played A Zombie in Day of the Dead,” a copy of the newspaper at the beginning of the film with the headline “THE DEAD WALK!” and one single, solitary dollar. The Zombies who attack and feast on Captain Rhodes are played by members of the Pittsburgh Rock band, The Granati Brothers – Hermie, David, Joey, and Rick Granati. Rhodes infamous line as he is being disemboweled by zombies, “Choke on ’em!” was actually ad-libbed by Pilato.

Day of the Dead was produced by Richard P. Rubinstein, while the music was composed by John Harrison. Both men have worked side by side with Romero since the early ’80s. The Walking Dead’s Greg Nicotero got his start and learned a few trick as Tom Savini’s assistant in special effects makeup, learning to deal with prosthetics vs. the intense humidity of the underground filming location. Nicotero also had a small cameo as Private Johnson. Look closely and you will see Romero himself as a Zombie – search for his trademark plaid scarf that was wrapped around his waist. Initially, in the scene where Sarah hacks off Miguel’s arm, the machete simply bounced off the rubber prosthetic, so Tom Savini remade the arm in wax and it worked perfectly. Like in Texas Chain Saw Massacre (1974), real animal blood and guts were used in lieu of latex and foam rubber, purchased from a local slaughterhouse. Unfortunately, the refrigerator being used to keep the intestines fresh was accidentally unplugged by a janitor, causing the viscera to spoil and getting some of the actors and crew physically sick. 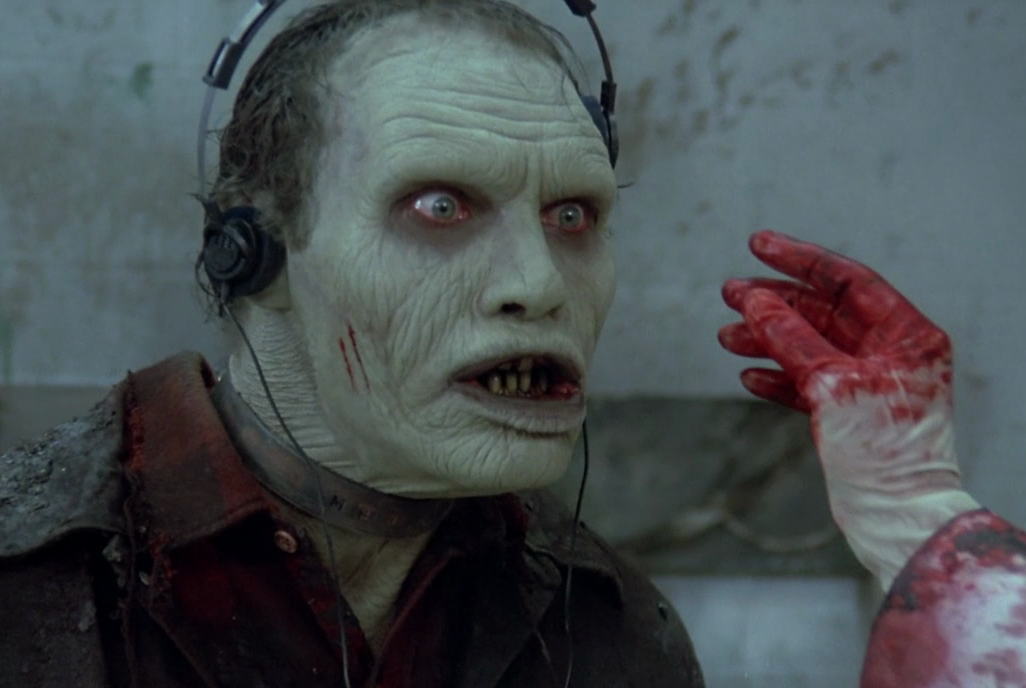 This was not the only time the people involved became ill. The underground location – a former limestone mine near Pittsburgh – was used as an underground storage facility before being cleared out to film Day of the Dead. The temperature hovered at fifty degrees Fahrenheit inside the cave but the humidity was intense and constant, having adverse effects on the filming equipment, props and crew. “The cave was incredible,” says Alexander. “There was so much limestone dust in the air… Bats were flying around all the time and it was cold all the time.  Some of the special effects, back then, took forever. We had to wait about an hour to set things up.” Cardille was a bit more affected. “It was horrible! When you say ‘underground,’ it’s funny, you go into a mountain, basically. It was not like you went down into the ground. You go into this mountain, which was a limestone cave, that had twenty-four miles of lakes. There was water dripping down the limestone. It was cold, dank, damp, and it really added to the atmosphere. You could see it in the film. What you see was what you got. We all got sick… I remember the scene where I come out at the Ritz with Terry, and he is doing that monologue about the tombstones. Well, that day I had a hundred and four temperature. I was so sick! I could hear my voice, it sounds so nasally.” Although it was not the most comfortable location, the cast and crew would often spend the night at the mine rather than waste time traveling back and forth from the shooting location.

The damp air caused many of Savini’s props and prosthetics to fail during filming. Despite this, the special effects guru won a Saturn Award for Best Makeup in 1985 for Day of the Dead. Although the huge amount of explosions and action were nixed by the low budget of only $3.5 million, Savini made the most with what he had and created one of the most iconic zombies ever – Alicia’s nephew, Bub. Another plus to having less special effects was the opportunity to delve into the characters and their personalities with more dialogue. “He (Romero) was running with the more flamboyant special effects with explosions,” says Cardille, “And they did not want to do it because it was much too expensive. He started developing the character of Sarah, and the characters themselves, because he did not have the money to do all of the special effects. Instead, he really developed the characters…” And, although fans were expecting another humorous movie like 1978’s Dawn of the Dead, instead they got an intense, thought-provoking, dialogue-driven slice of humanity that audiences loved, despite their initial reservations. 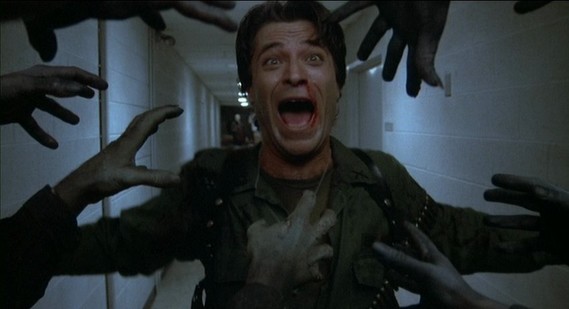 Rather than forget his grandiose ideas for Day of the Dead, Romero turned around and made them into the fourth film in the Dead series, Land of the Dead, in 2005, one year after the Dawn of the Dead remake was released. Starring Dennis Hopper, John Leguizamo, Dario Argento’s daughter Asia and The Mentalist’s Simon Baker, Land of the Dead became the second highest grossing film in the Dead series and reminding fans what they love about Romero. The director finally got the above ground fortress with electric fence protection and the army of trained zombies that he had initially wanted for Day of the Dead. 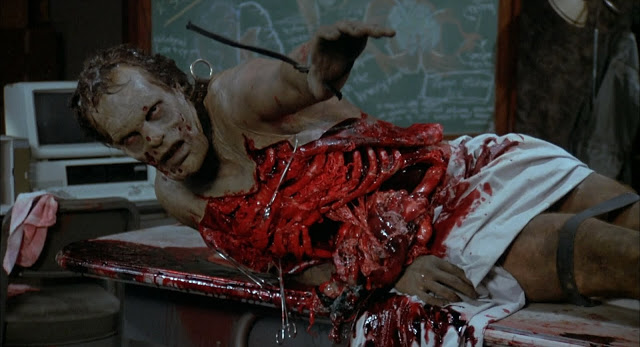 Day of the Dead has had its share in Pop culture as well. The Brit-Pop band Gorillaz have used several audio clips from both Dawn of the Dead and Day of the Dead. The bullhorned request for survivors from the beginning of Day of the Dead was featured in the track “M1 A1” from their self-titled, debut album in 2001. T-shirts with the film’s title have shown up in movies across the spectrum, from Jon Cryer’s Morgan Stewart’s Coming Home (1987) to the Dirty Harry film The Dead Pool (1988). The end of the video game turned movie Resident Evil (2002) was filmed like the opening of Day of the Dead, right up to the newspaper with the headline “THE DEAD WALK!” It has also been featured in Horror themed documentaries such as Nightmares in Red, White and Blue: The Evolution of the American Horror Film (2009) and a 2013 episode of Cinemassacre’s Monster Madness titled “Day of the Dead.” Even Bub the Zombie got an homage in C.H.U.D. II – Bud the Chud (1989). There is no denying the influence this groundbreaking movie has had on both cinema and Horror culture.

While not as commercially popular as Dawn of the Dead has become, Day of the Dead is considered by many fans the best film in the Romero saga. The lightning in a bottle captured in that dark, wet, underground cave will never be replicated, and a death like the one Captain Rhodes suffers will never be repeated with the same gut-churning Horror that was caught on film back in 1985. The current popularity of Zombies in Pop culture can be directly linked to Day of the Dead. The movie’s influence can be seen in almost every shambling, undead creature feature for the past thirty years. The long term effects of such an apocalyptic event had never been explored beforehand, and it opened up a whole new can of rotten worms in terms of society and how they would deal with the dissolution of civilization.

Everyone from Robert Kirkman, the creator of The Walking Dead Comic Book series, to current Horror directors Guillermo Del Toro, Eli Roth, Clive Barker, Robert Rodriguez, and Edgar Wright have all admitted to being inspired by Romero and his films. Although Romero did not make the movie he initially wanted to thirty years ago, he succeeded in bringing about another great Dead offering just the same. Fans would not have it any other way. 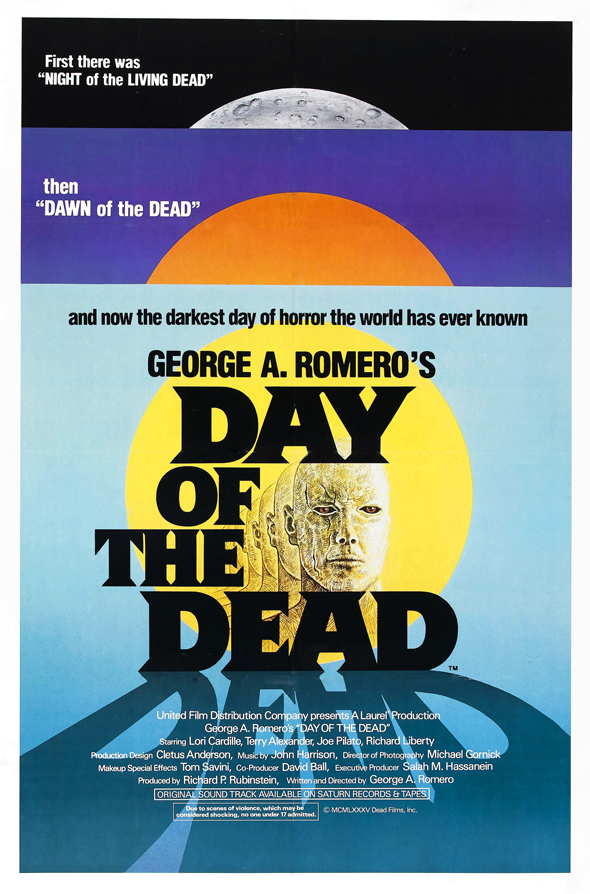 Purchase Day of the Dead on Blu-ray/DVD on Amazon