De La Soul – and the Anonymous Nobody… (Album Review) 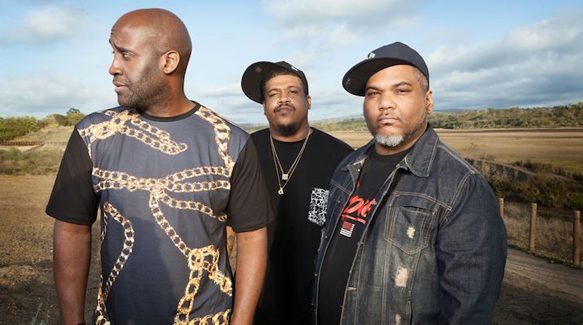 Few Hip Hop groups can claim they have the amount of staying power and longevity as Long Island based Hip Hop outfit De La Soul has exhibited. Hailing from Amityville, NY, Posdnuos, Dave, and Maseo have been making some of Hip Hop’s most creative and boundary pushing music since the late 1980s. Any lover of Hip Hop music will agree that their legacy was born upon immediate release of their seminal album, 1989’s 3 Feet High and Rising. Following up the album was no easy task, however, the boys from Amityville completely cemented their legendary status with 1991’s De La Soul is Dead, 1993’s Buhloone Mindstate, and 1996’s Stakes is High.

After releasing a few more albums during the late ’90s that garnered favorable reviews, before 2004’s acclaimed Grind Date, it appeared De La Soul needed a much deserved break. Fast forwarded to 2016, Hip Hop heads were finally treated to a brand new album of all new material, their ninth album, and the Anonymous Nobody…. Most who know even the tiniest bit about De La Soul would all agree that it seemed like they were one of the few groups whose music was not readily available in iTunes and Spotify. That said, due to sample clearances, De La Soul was not able to make a lot of their material available to the world. This is where and the Anonymous Nobody… comes into play.

Instead of relying on samples and standard measures and practices of making Hip Hop records, De La Soul decided to work with the impeccably talented band the Rhythm Roots Allstars. Assisting in creating a sonic landscape, it would allow De La Soul to use live instrumentation pulling from all types of genres including Funk, Rock, Space-Pop, and Psychedelia to create a platform where the three MC’s could lay down vocals to fit each individual track.

With limitless possibilities, it was becoming apparent that the band could finally release a solid, readily available album to the world that was their own creation. This was all while still making it free from sample clearance legalities since they were now working with a live band. Also, to be noted, the band created a Kickstarter page that easily helped fund more than 600,000 dollars to the final product of this album.

With a large dose of collaborations throughout, the standout track “Pain,” whose guest of honor was none other than Snoop Dogg, brings the listener on a journey through life’s struggles and the many ways to cope with it. It does not hurt to have one of Rap’s most famous MCs guest star on the track as well. From here, songs are all over the map, from Arena Rock shouts such as “Lord Intended;” where The Darkness’ Justin Hawkins contributes stellar vocals, to slower more R&B influenced “Greyhounds;” which features a guest appearance from Usher.

Setting the tone for what has become one of 2016’s most important Hip Hop albums, classic MCs from Hip Hop’s golden era such as Pete Rock make appearances on the track including “Memory of… (Us)” before De La Soul throw down their much harder Rock sound with “CBGB’s.” Short but sweet, it has a real funky guitar riff backed by a classic sounding boom bap drum pattern all dressed around catchy De La Soul witty lyrics. In addition to it all, Blur and Gorillaz’s Damon Albarn contributes on the exciting atmospheric “Here in After,” which consists of Rock and Pop musical influences twisted with optimistic lyrics of being happy to still be alive on this earth.

and the Anonymous Nobody… is a fan’s album, made in help by the fans and for the fans. De La Soul knows it, the fans know it, and so does the music industry. Gone are the stresses of musical legalities or the pressure of finishing an album by record label deadline. As a result, and the Anonymous Nobody… is a musical landscape free of limits and open to a wide array of thoughts and emotions that will hit each listener differently.

The swagger is there, the lyrics are there, the same creativity is there, and is bountiful, considering De La Soul recorded over 300 hours of live instrumentations for the album. Fans should be rejoicing, because in a world full of watered down Hip Hop and mainstreamed Rap albums, De La Soul has single-handedly breathed new life back into the genre that has given them so much. That is why they made album, to pay it back and then some. CrypticRock gives and the Anonymous Nobody… 5 out of 5 stars. 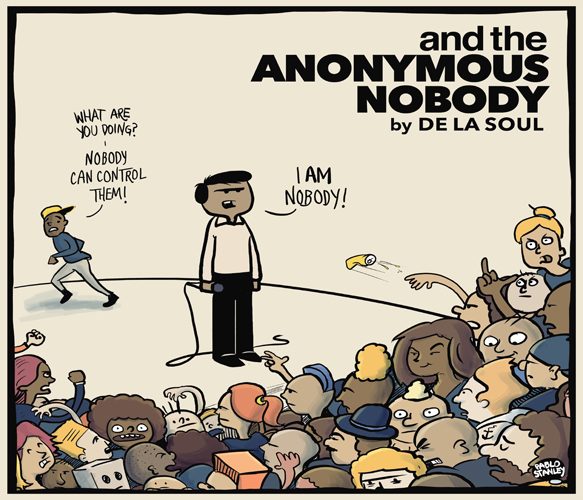