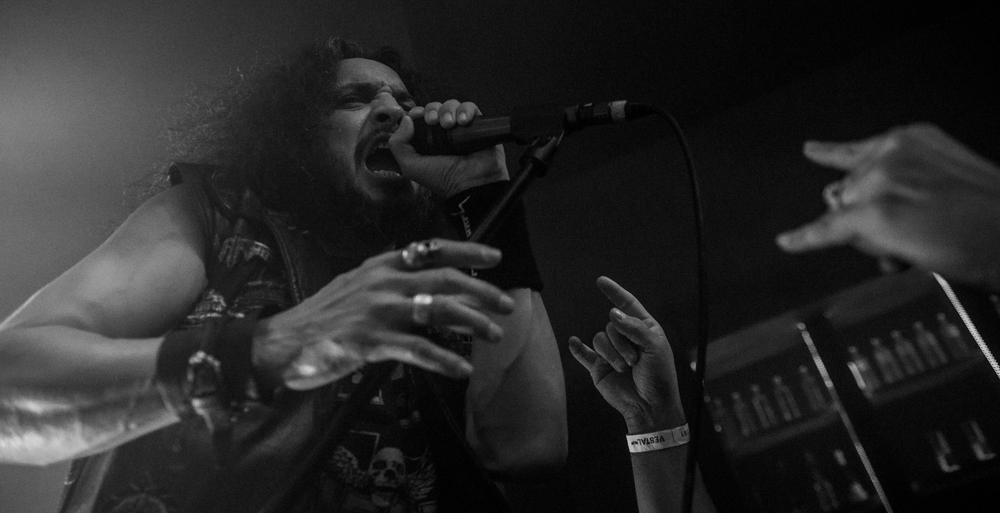 Sunday November 10th hosted another evening of rock and metal at Observatory in Santa Ana, California.  A huge line formed outside the doors with everyone excited to see Death Angel, 3 Inches Of Blood, Battlecross, Revocation, and Diamond Plate rock the roof off the venue. With a stacked line-up of high quality metal bands, everyone packed into the Constellation Room at Observatory for the final night of a month long tour.

Opening up the show was the trio from Chicago, Diamond Plate. Formed in 2004 while still in high school, this young band has continued to refine their sound making them a very musically strong band to hear as they play every song to near perfection. Crushing guitar riffs of Konrad Kupiec, insane drumming of James Nicademus, and vocal and bass styling of Matt Ares; from the first note to the last created a massive insanity of energy on stage. Kupiec’s guitar solos were very deep and linked with the crowd every minute as dozens of hands were reaching out towards him as he played. Ares slammed on the bass with such command that towards the end of his set you can see blood trickling down his hand onto the bass. This band displays such commitment to their performance that it would have been difficult for the audience not to be engaged and enjoy their performance.

Next up were the technical death/thrash metal band from Boston, MA in Revocation. Originally known as Cryptic Warning early on, they changed their name to Revocation shortly after. With 4 studio albums to their career with their most recent being self-titled Revocation, the audience was excited to see them back in Santa Ana. Performing songs from their latest self-titled album they engaged the crowd into the pit with tracks “Invidious” and “Fracked”. They also mixed in old tracks which at one point the 3 Inches of Blood drummer Ash Pearson walked out on stage dressed in a costume and attributed some singing to their performance. The guitar sound was top notch throughout their entire set which really got the crowd going. If people were unfamiliar with Revocation before tonight, they sure were aware at the end and look forward to seeing what they have in store next.

Next out was one of the highly anticipated bands of the night, Battlecross from Detroit. After a successful run on this year’s Mayhem Festival, much talk is going around the metal world about this fast rising band which bring an energizing style that screams aggression to the table. Their performance was highlighted by songs such as their popular “Man of Stone”, “War of Will”, along with “Push Pull Destroy”. These dominating tracks set the pace for the rest of their set. The energy projected out upon the audience ignited mosh pits so intense that at times one would think that the building will collapse. It’s this time of intensity which keeps every fan coming back for more. Heaviness, speed, and aggressiveness are the main factors which make Battlecross effective and really bring back the roots of thrash metal.

Just when you thought the metal assault was complete it was time for Canada’s 3 Inches of Blood. This band has been known for an extensive amount of lineup changes since 1999 but has sustained a stable core now since 2007. Now 11 years since the release of their debut album Battlecry Under a Wintersun the band has built a very solid following and their population in the metal scene has not diminished. A strong part of what makes 3 Inches of Blood so appealing to fans is their undeniable influence from NWOBHM. The crowd ate up every song and sang along with each and every word especially during favorites like “Deadly Sinner”. Cam Pipes’s unique falsetto wailed with a spot on performance. It seems every time 3 Inches of Blood come around they bring nothing but energy and excitement to hungry metal fans and this evening was no different.

After a balanced line-up of new and established bands in the scene it was time for thrash metal titans Death Angel. Being one of the key contributors to the 1980s San Francisco Bay Area thrash metal scene, putting on a show in their home state just a few hours from where they started out surely got these guys pumped up. Performing songs of their new album The Dream Calls for Blood; “Left For Dead” and “Son of the Morning” plus some of their old classics, had the crowd going insane as a few mosh pits broke out and you felt the aggression pouring out. Their performance was solid and on point. Due to the high elevated drum kit, Will Carroll was above audience’s eye level and the crowd wanted to see him. Comically Pipes said, “Look at him, he is gorgeous!” and Carroll stood up and emerged from his high drum kit to a roar from the crowd. After a 90 minute set with a great encore the crowd was definitely not left disappointed.

One thing is certain about Death Angel, these guys are metal warriors; from the stand point of pumping out solid record after solid record to their dedication to getting their music to the fans and constantly touring. They will be embarking on yet another tour in spring of 2014 in support of Children of Bodom. If you have yet to catch them live make sure you do on their next tour.