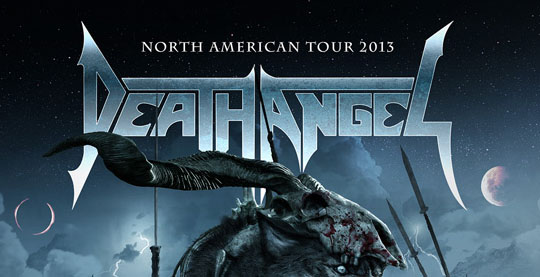 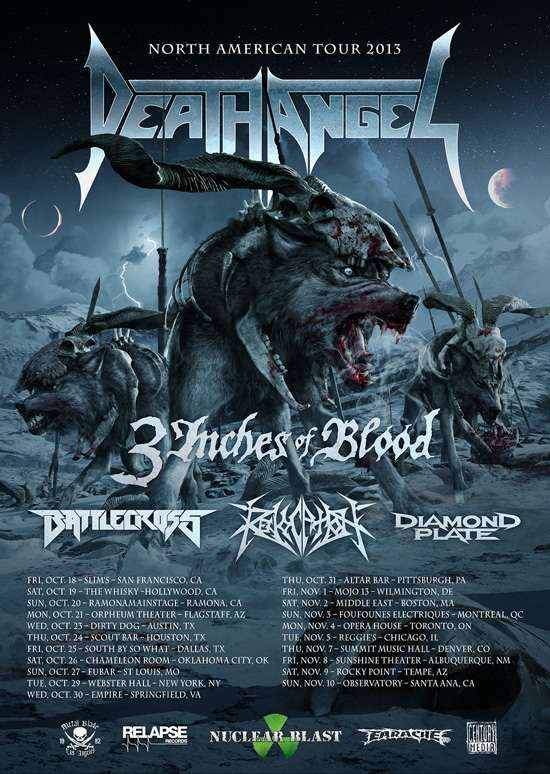 Death Angel, 3 Inches Of Blood, Battlecross, Revocation and Diamond Plate are teaming up for a fall 2013 North American Tour.

Battlecross are about to return home from their summer of touring as part of the Rockstar Energy Drink Mayhem Festival, but won’t be idle for long. The Michigan-based upstarts will be performing at the GWAR-BQ next weekend, then will head out on a short tour in September-October with Hatebreed. To cap off an extremely successful 2013, Battlecross has announced that they will be supporting Death Angel on their fall headlining tour! Battlecross will join the tour’s other supporting acts 3 Inches of Blood, Revocation, and Diamond Plate for a tour that begins on October 18 in San Francisco and wraps on November 10 in Santa Ana, CA. Tickets are on today/tomorrow in each city.

A new performance demonstration video for “Flesh & Bone” from “War of Will” has been posted to metalblade.com/battlecross. The video features Tony Asta, Don Slater, and Hiran Deraniyagala performing their individual parts to the track that proved to be a fan favorite on the road. “Flesh & Bone” was the soundtrack to walls of death all summer long on the Rockstar Energy Drink Mayhem Festival, and popular metal blog, skullsnbones.com, even put together a compilation of fan-filmed walls of death from different cities on the tour. Watch those videos now at skullsnbones.com HERE!

“War of Will” debuted at #134 on the Billboard Top 200 chart, #118 on the top current albums chart, #2 on the heatseeker chart, #15 on the current hard music chart, #16 on the hard music overall chart, and #32 on the independent albums chart. It didn’t stop here though, as the band also debuted in Canada’s Soundscan charts coming in at #178 Top 200 Current and #25 Hard Music Charts while also landing on the iTunes charts for release date at #103 on the Top 200, #10 on Rock, and #2 on Metal! This marks the band’s first ever Billboard chart debut! “War of Will” also peaked at #3 on the US iTunes metal chart on the day of release.

“The level of musical and compositional progression here is startling, to be quite honest…The effect as a whole is energetic and fist-pumping to the extreme, ushering in a beacon of hope for American metal in 2013.” Zero Tolerance Magazine (UK)

“Get ready for Battlecross to move up to headlining status by the conclusion of this album’s touring cycle. War Of Will is a rallying cry for American metal, synthesizing the best of all sides of the extreme, thrash, and modern genres to champion for the genre.” DeadRhetoric.com