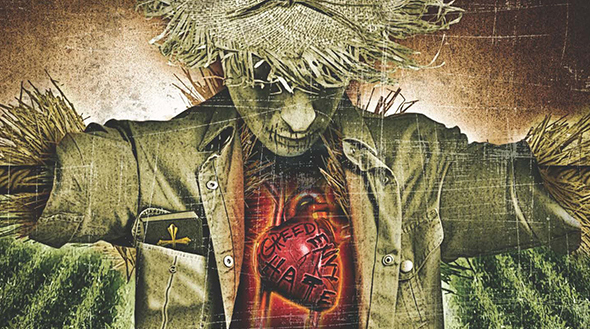 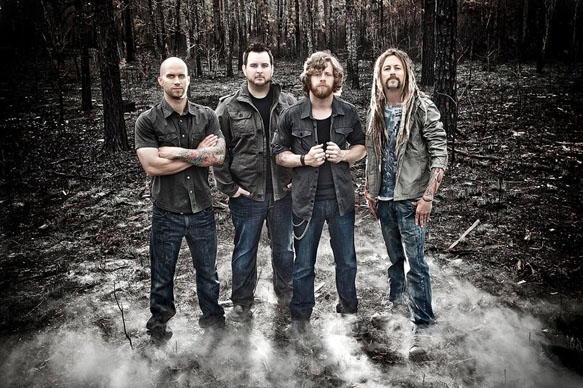 Decyfer Down is a band with history. Begun back in 1999 in Morehead City, NC, the only two original members remaining are Brandon Mills (guitars/backing vocals) and Josh Oliver (drums). Their debut album End Of Grey made some waves in the Christian hard rock scene back in 2006. In 2008 the band’s long time vocalist Caleb Oliver (brother of Josh) departed prior to the recording of their 2nd record Crash. This ushered in a new era in the band with TJ Harris taking over as lead vocalist. Rather than take a step back the band took a step forward with Crash being even more successful than their debut. With all due respect to Caleb, whose voice was strong in its own right, Harris brought a new dynamic to the band with his vocal approach. Now 5 years later, Decyfer Down is ready to take things to the next level with the release of Scarecrow.

This album comes to much anticipation as per the long lay-off between albums. Many wonder as to where Decyfer Down would take things next.  This will also mark the first record written with Harris on vocals.  Scarecrow begins the record on a high note with “Memory”. The track lets the listener know the band has further morphed their sound. Harris’ voice is low, clear, and intense; the guitars loud, proud, and ready to explode. This showcases a more straight ahead stripped down rock approach to which each track follows. “Westboro” starts out with a similar rock sound and then you are hit with a soulful vocal output by Harris. The southern rock influence is felt heavily on this track and it works well. Keeping things diverse Decyfer Down throws the listeners a curve ball with “Worst Enemy”. With larger than life riffs by Chris Clonts and Brandon Mills, the track takes on a 90’s alternative rock vibe similar to that of Stone Temple Pilots. Harris gives dynamic vocals ranging from rough to smooth, and the backing tracks really provide a nice touch to the complete track. “Say Hello” slows things down a bit with a really cool dirty grungy vibe. The guitar tone is stellar and Harris reveals even more with his voice here. With a clear precise delivery through the verse, the chorus allows him to let lose making for a great rock track. “Bleeding Lies” is perhaps the deepest and darkest offering of the album. Lyrically diving into inner struggles with truth, lies, and navigating through it all. Harris brings the words to life with inflections you feel deep inside your soul. Clonts’ bluesy guitar solo hits home, note for note, and completes a track that really strikes a chord in the heart of the listener. “Fight to Win” picks things back up with an upbeat tone and Harris belting out a motivating chorus conveying never to give up and fight for what you believe. More than half way through the record the title track “Scarecrow” hits you hard. Generally classified as a Christian rock band the track lyrically could come across as controversial to some, but listen clearly. Peeling away the layers of misconception and hypocrisy around us, the lyrics attack ones which cast judgment and feed off the weak. This could be a reference to politicians or mainstream media, but essentially the vibe one gets from the track is to practice what you preach.

As the album winds down we are provided a series of quality tracks. “The River” is a cool little southern bluesy rock track which will have you grooving hard. “Some Things Never Change” is a solid rock track with some nice guitar parts and experimentation with sound. The closing track “So In Love” is the most pop rock track on the album. This is not at all a knock on the track, but a nice bold closing to the record with a light-hearted sound and beautiful lyrics. Decyfer Down shows on this track that they are not a one dimensional band and can craft a variety of quality rock tracks.

Scarecrow is a different direction for Decyfer Down. The band appears to have matured in their sound writing to a point they can write even better crafted and dynamic tracks without any let downs from start to finish. Sometimes breaking things down to basics is a positive thing and that is what Decyfer Down has done with Scarecrow. Keeping their identity yet making a more human record is a strong feat these boys have accomplished here. The record has enough variety to put it on and not skip a track or feel bored with any of the material. Cryptic Rock gives this album 5 out of 5 stars. 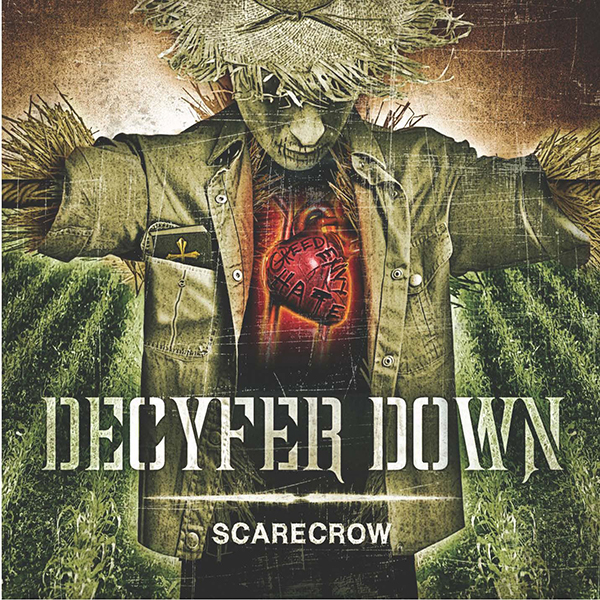