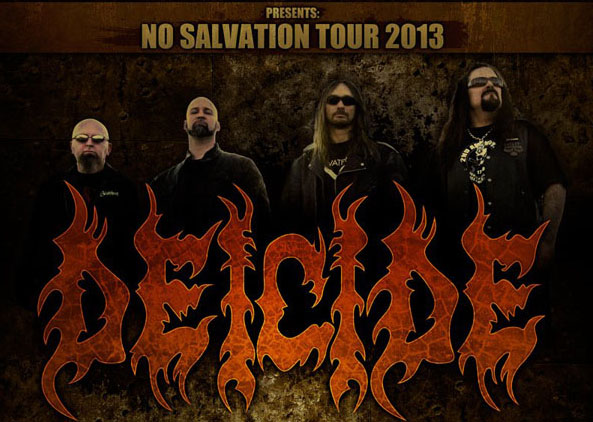 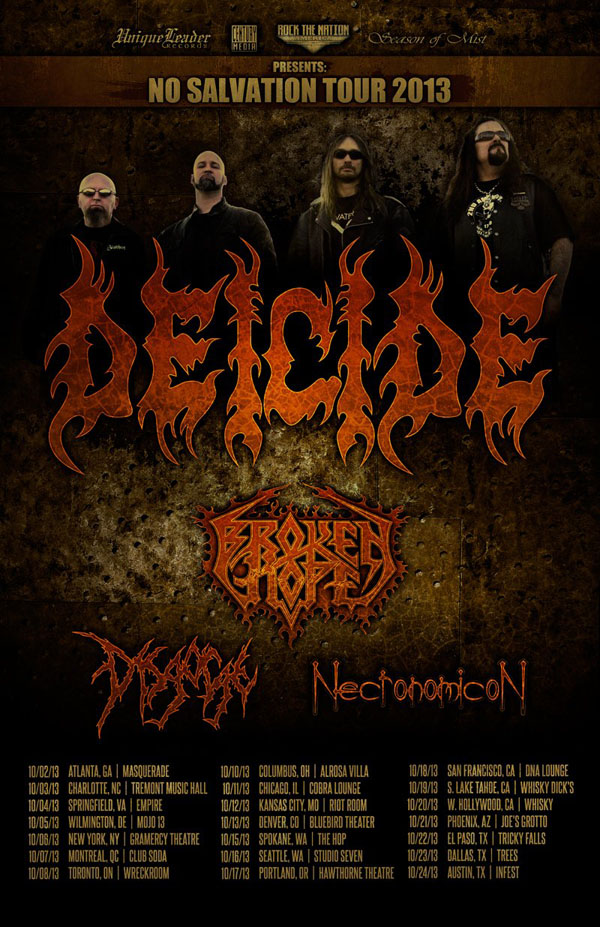 Metal icons DEICIDE are returning to the road this fall on their NO SALVATION TOUR 2013 – a headlining run with fellow Century Media labelmates and death metal favorites BROKEN HOPE. Also in support are DISGORGE and NECRONOMICON.

The tour launches October 2 in Atlanta, GA, and ends October 24 in Austin, TX. Highlights include a convergence with the Delaware Death Fest October 5, as well as stops in New York City, Chicago and Los Angeles. Complete dates are listed below.

DEICIDE will be touring to promote their upcoming, yet-to-be-titled studio release, due out this fall on Century Media Records. The album will be their second for Century Media, and the follow-up to ‘To Hell With God’ in 2011. DECIBEL MAGAZINE joined DEICIDE and producer Jason Suecof in the studio earlier this year, reporting: “Expect a super-brutal blast to the cranium. Longtime fans will pick up on nuances inspired from the almighty Legion effort.” With drummer Steve Asheim adding that “we’re going to get down and dirty this time around, so expect the lyrics to be brutal.”

BROKEN HOPE release ‘Omen Of Disease’ October 1 – the album will be their first studio record in nearly 15 years, and debut album for Century Media. DISGORGE will release their fifth studio album in late 2013 on Unique Leader Records, while NECRONOMICON are touring in support of ‘Rise Of The Elder Ones,’ released June 10 via Season Of Mist.

DEICIDE with BROKEN HOPE, DISGORGE & NECRONOMICON dates are as follow: