Deirdre – a fifteen-minute short film by British Writer/Director Jo Southwell (Cover Me 2014, Holding On 2012) – recently made its debut during the Richard Harris International Film Festival showcase, a portion of the world-renowned Cannes Film Festival. Aston Productions presented the film for screening on May 24th at Morrison’s Irish Pub in Cannes, France, and hope that the short piece will whet appetites for a feature-length adaptation of the beautifully haunting tale.

Set against the gorgeous backdrop of the Irish countryside, Deirdre tells the story of its namesake heroine – played by India Mullen (Red Rock TV series, Into the Badlands TV series) – who is a young woman, coming-of-age in the 1970s. We see Deirdre constantly beside the clean-cut Niall (Seán Doyle: Killing Bono 2011, Fair City TV series), though there is a clear, dangerous attraction to the local bad-boy, Conor (Michael Mullen: Blue Dawn 2017).

At home, Deirdre is the victim of her wacky, religious mother Mary (Elaine Fox: Mattie TV series, Camelot TV series), who continually locks her in the cupboard where she is urged to repent for her lusty-eyed sins. A conversation between Mary and the scruffy Paddy (Zeb Moore: Ouija: The Insidious Evil 2017, Mrs. Brown’s Boys D’Movie 2014) makes it abundantly clear that the sins of the mother are being passed unto the child.

In fact, though his screen-time is limited, Paddy offers the most pivotal line of the short: “You go to mass once a week and you think that gives you some God-given right to judge everyone else.” Complete with a truly haunting baptismal scene, Deirdre is a tale mired in faith and family, set across a gorgeous backdrop.

Deirdre is the definition of a short film: from start to finish – including the credits – the film clocks in at exactly 15 minutes. Beautifully orchestrated and hauntingly intriguing, Deirdre has much to offer, though it clearly needs more time to flesh out its dark Irish fairytale, based off the traditional folklore of “Deirdre of the Sorrows” (think a more macabre, Irish Romeo and Juliet).

Superbly-talented female Director/Writer Southwell is currently seeking partners for the feature-length adaptation of the film – in which Tara Fitzgerald (Exodus: Gods & Kings 2014, Game of Thrones series) has already signed on to portray the role of mother Mary. Deirdre is currently considered to be a “proof-of-concept” short to whet appetites across the spring film festival circuit and is not to be missed. CrypticRock believes firmly in the future of Deirdre and gives the short 5 of 5 stars. 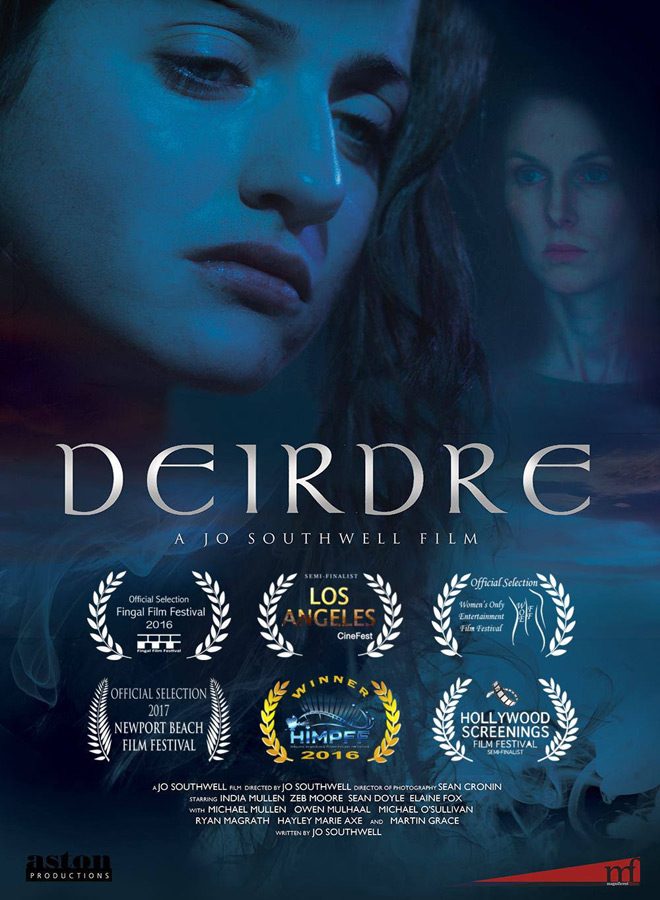