Delain – A Decade of Delain: Live at Paradiso (Album Review) 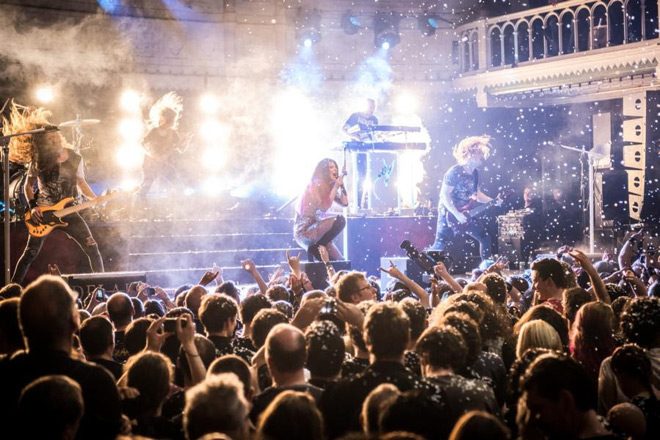 Just in time for the 2017 Holiday season comes a delicious Dutch treat: Delain present the special two-disc live concert offering A Decade of Delain: Live at Paradiso on Friday, October 27th thanks to Napalm Records.

Dutch Symphonic Metal outfit Delain began their lengthy journey nearly fifteen years ago when Keyboardist Martijn Westerholt returned to writing and recording music following his departure from Within Temptation, a move that was spawned from Westerholt contracting Pfeiffer’s Disease (a form of infectious mononucleosis). As he poured his heart and soul into this new music and the project developed, Vocalist Charlotte Wessels came on-board and the new group was officially born in 2005. Over the next ten years (and some change), the band would release five epic albums – from 2006’s Lucidity to 2016’s Moonbathers – paving the way for the group to cross the Atlantic and win over a vast array of Metal fans’ heart with their stellar live show.

Now that marvelous live show is coming front-and-center with the release of Delain’s double-disc A Decade of Delain: Live at Paradiso. Recorded live at the Paradiso concert venue in Amsterdam, this collection covers two CDs and twenty-three songs. Concocting a dream set-list that spans the band’s decade-long, five-album career, Delain present a live show that – even when experienced from the comfort of your living room – will bring a smile to your Rock-loving heart and an emphatic display of the Metal horns to accompany your joy.

So how does Live at Paradiso play-out? Disc One – containing thirteen tracks – begins with the gorgeous introduction “The Monarch,” from 2016’s Moonbathers. It brings the band to the stage and sets the scene for the glorious performance that is about to follow, flowing into an immediate stand-out offering, “Hands of Gold.” This killer assault allows Wessels’ soaring soprano to absolutely shine alongside the venomous growls of guest Vocalist Alissa White-Gluz. These two amazing Metal mavens feed off one another’s energy, creating the perfect atmosphere to allow the band’s fantastic talents to shine; and the sound here is massive.

Delain continue to prove that every ounce of magic that they bring to the studio is but a snippet of their possibilities when performing live. “The Glory and the Scum,” also from their most recent album, begins with a beautiful fairy twinkle of keyboards from Westerholt before exploding into that deliciously massive Symphonic Metal sound. Between songs, Wessels banters with the crowd, taking her time to introduce the band’s next offerings. She does so with “Army of Dolls,” from 2014’s concept album, The Human Contradiction, getting the crowd clapping along before her band-mates kick in with their gorgeously evocative sonics.

“April Rain,” from the 2009 album of the same name, sees delicate keyboards leading the charge into that bewitching Delain sound and, with the crowd in a complete hush, it seems to prove that they have in fact been entranced. It paves the way for “Where Is The Blood,” which features Burton C. Bell dueting alongside Wessels in the song’s chorus. This amps the energy in the Paradiso, making way for “Fire With Fire,” a beautiful display of a talented band firing on all cylinders and a definite stand-out in the collection. “The Tragedy of the Commons” presents meandering guitar work from Somers and Bechtold, anchoring the performance for Wessels and returning White-Gluz to tackle the bittersweet yet pulverizing track. Fans will jump up and down and rock out, even if they are imbibing from their suburban living rooms!

Disc Two – containing ten tracks – begins on a very special note: former Delain bandmates Guus Eikens (Guitar), Rob van der Loo (Bass), and Sander Zoer (Drums) return to share the stage and tackle the gorgeously enchanting “Sleepwalker’s Dream.” With some truly phenomenal drum-work from Zoer, this beautiful offering sees Wessels’ working her audience into a chant and the band showing off why Delain are a decade strong (and counting)! It moves them into the rocking “Your Body Is A Battleground,” which features Vocalist Marco Hietala soaring alongside Wessels in a superb Metal moment. Equally gorgeous is “See Me In Shadow,” a duet between Wessels and Liv Kristine Elianne that weaves around stellar keyboards and deep bass lines.

Wessels introduces Lucidity’s “The Gathering” as the “party favorite” with driving guitars and more killer bass-lines from Schimmelpenninck van der Oije. It flows into “Pristine,” where the guest growls of George Oosthoek contrast superbly alongside Wessels’ soaring soprano. Hietala returns for the siren’s call of “Sing To Me,” contrasting deliciously with the seductive lilt of Wessels’ vocals and offering a stunning example of the endless musical possibilities of Delain. You can almost feel the crowd jumping along to “Don’t Let Go,” another stand-out, with Wessels’ and her bandmates inciting a frenzy. With the boundless energy flowing through band and crowd, Delain end with the anthemic “We Are The Others,” off the 2012 album of the same name. In closing, Wessels announces with glee: “Thank you for sharing this special moment with us, guys. You rock!”

The truth here is that Delain rocks and they rock beautifully hard. Encompassing every nuance of what makes Symphonic Metal so truly entrancing, this band present operatic vocals set to labyrinthine melodies and heavy, epic rhythms. Some bands can only pull off their epic atmospherics in the studio, though with a decade of fantastical journeys under their belt – and now A Decade of Delain: Live at Paradiso as solid evidence – there is absolutely no doubt that these Dutch wonders can kick-ass and take names for Rock-n-Roll.

With a killer live show that translates to happy eardrums across two CDs and an endless list of stellar guest musicians, how could you not want to hear Live at Paradiso? If there is a Delain or Symphonic Metal fan on your Holiday shopping list, then definitely gift them the sounds of this collection; or, better yet, simply treat yourself to the sound of musical perfection on CD! We believe in moonbathing, so CrypticRock give Delain’s A Decade of Delain: Live at Paradiso 5 of 5 stars. 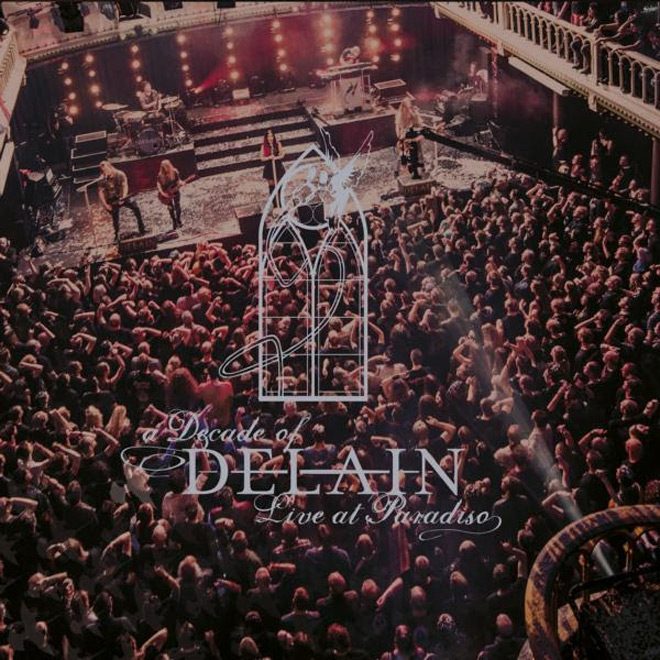 Purchase A Decade of Delain: Live at Paradiso: