Being in the outdoors used to be a relaxing way to spend spare time, toasting marshmallows, listening to the wildlife, and sipping hot chocolate. With the increasing array of Horror movies being focused on the vast American woods, camping may become a thing of the past. Written by Cecil Chambers (God’s Country 2012, AWOL-72 2015) and directed by Rob Garcia (Steve-O: Demise and Rise 2009, Rob Derek’s Fantasy Factory 2010), Desecrated is the latest Horror movie to be released by Evenflow Entertainment and Triumphant pictures on January 6th, 2015. Featuring Cinematographer Bruce Logan, the film captures beautiful yet expansive mountains and woods around Marina del Rey, California, creating a scenic background for the fast-paced movie. Beginning with three friends camping in the woods, one of the men confessed to desecrating a nearby grave. Almost instantly thereafter, the three of them are soon running for their lives from an unrelenting masked killer. 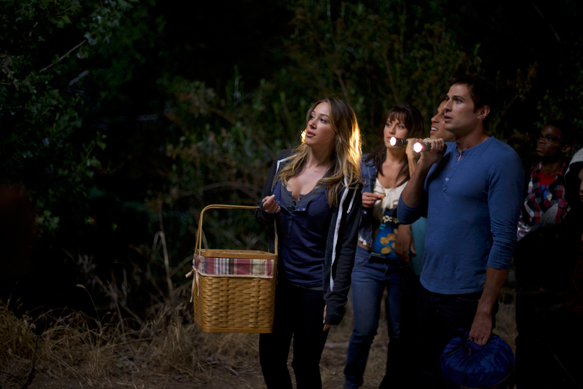 Simultaneously, for her last spring break, rich girl Allie McClean (Haylie Duff:  Napoleon Dynamite 2004, Material Girls 2006) takes her boyfriend Evan (Gib Gerard: The Wild Stallion 2009, God’s Country 2012) and their friends Marcus (Paul James: Cry_Wolf 2005, Greek 2007), Lizzie (Heather Sossaman:  Beverly Hills, 90210 1990, NCIS: Los Angeles 2013), Eduardo (Wilmer Calderon: Fast and The Furious 2009, Agents of S.H.I.E.L.D. 2014), and Eduardo’s girlfriend of the moment Nina to her father Tom’s (Michael Ironside: Top Gun 1986, Total Recall 1990) ranch. Allie does not want her father to know firstly, that she is going to the ranch, and secondly, that she is bringing Evan and her friends, so she keeps this a secret. However, keeping it quiet becomes a little difficult when her arrival startles the ranch hand and former owner Ben (Gonzalo Menendez : The Island 2005, The Dark Knight Rises 2012). Ben, a former war veteran whose wife and child disappeared years ago, maintains the property for Tom. The only other person close by is young neighbour Timmy (Adam Daniels: End of the Trail 2015, AWOL-72 2015), who regularly pops in to say hello, which also ires Ben, but then few things do not. 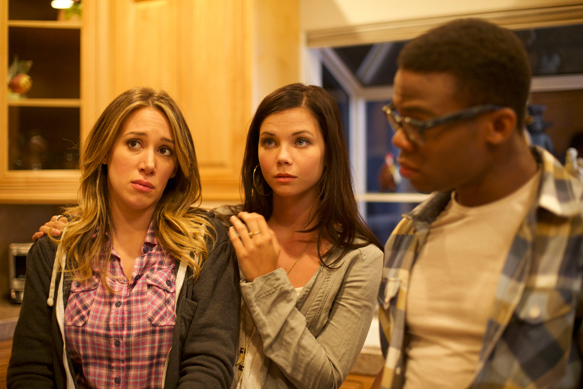 The first afternoon, Allie and her friends enjoy the countryside, as well as the luxuries on the ranch. That evening, they go camping in the woods, make a small fire to toast marshmallows, and watch the stars. Preferring some alone time, Nina and Eduardo opt to fool around in a locked trailer that appears to have been undisturbed for some time. The couple are not in the trailer long before they catch sight of jars full of strange looking organs and a candle-filled shrine. Hearing noises from within the trailer, they run back to their friends and they flee to the safety of the main house. The next day, trying to forget the previous nights events, the group become even more rattled when two of them disappear after an innocuous flat tire while quad biking. The four remaining friends share their concerns with Ben, and even a visit by the local Police does little to shed light on the situation. They take refuge from an unknown, unseen danger, which looms in the darkness.

As the next evening draws closer, they find themselves on the run from a psychopathic serial killer whose disturbing past appears to be linked of all people to Allie’s father. There is no one to trust, no where to turn, as Allie and her friends fight against a force they are unprepared and untrained for. As the story unfolds, the pieces of the puzzles are thudded into place, as the viewer watches the sad systematic destruction of a former military war hero, due to the succession of unfortunate and traumatic events, combined with a tenuous mental state and deadly skills. Truly a terrifying, an edge of the seat no holds barred thrill ride. 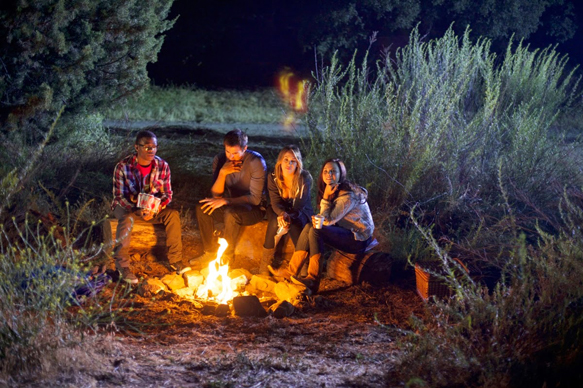 Stereotypical characters are subject to very untypical behavior, and unexpected gruesome fates. Duff does an outstanding job as Allie, a role that is completely out of character for her, but nonetheless she made it her own and delivered the goods. Ironside has had a career reassurance as late, particularly in Horror movies, often as quirky but intense characters. This one is no different. Seamless special effects in Desecrated are complemented by the scary atmosphere, justifying what one does not see is often scarier than what they do. Heavily plot driven, with a solid story, lots of fun, and plenty  of surprising twists and turns. A must watch, CrypticRock scores Desecrated 4 out of 5 stars. 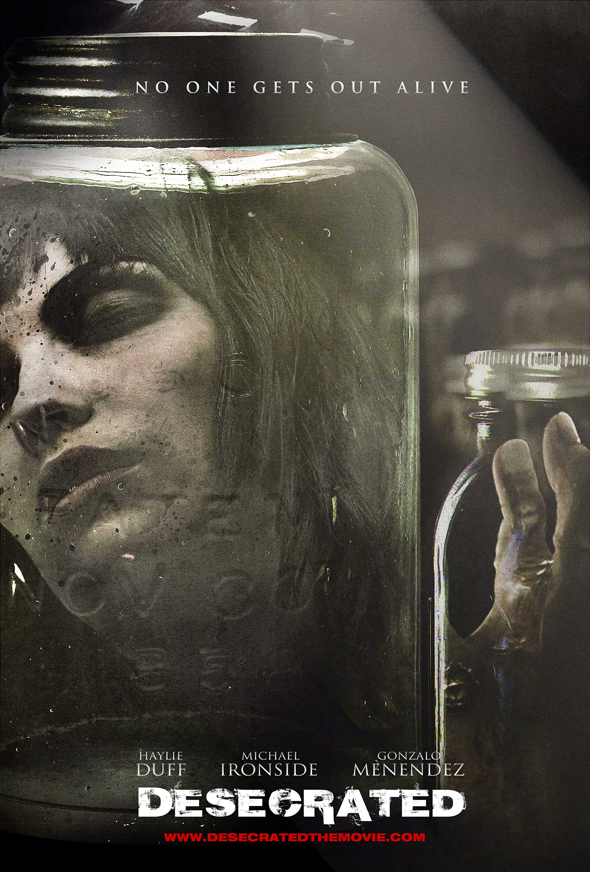 Purchase Desecrated on DVD on Amazon