Deep in the woods you will find a desolate form of solitude, though for those that dare to go off trail, unique horrors await! Hike into the forest for brand new Drama/Thriller Desolation from IFC Midnight, which arrives to select theaters as well as VOD and Digital HD on December 15, 2017. 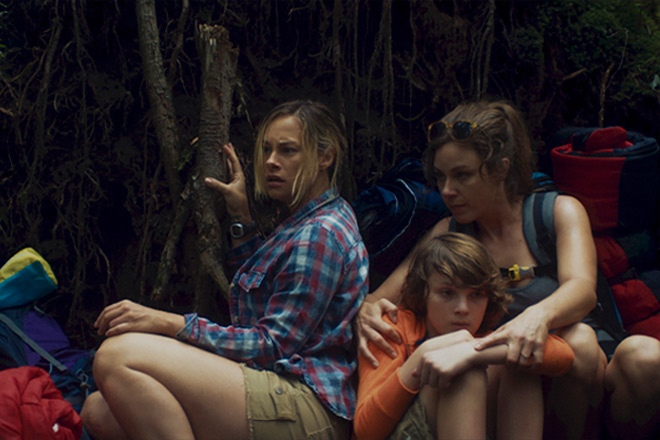 Suffering under the emotional heft of losing her young husband, Abby (Jaimi Paige: Peacock 2010, Rizzoli & Isles series) takes to the woods with her best friend Jen (Alyshia Ochse: The Other Woman 2014, True Detective series) and teenage son Sam (Toby Nichols: Underground series, Iron Fist series). Their mission is to scatter Michael’s ashes on the mountaintop he loved, though along the way the trio hope to relieve the stress and sadness that has become everyday life.

After a night of wine and marijuana-laced confessionals for the two women, the group are awoken to the sounds of Oldies tunes playing in the woods. When they quickly discover that one of their tents is slashed and someone is missing, the situation will escalate from spooky to dire for the remaining duo who will have to pull together to survive their hike. Sam – who, to quote Britney Spears, is not a boy but not yet a man either – asserts that he is an adult, and will, with a mustache of dried blood painting his pale skin, get his chance to prove his worth if he can survive the horrible twist of fate that stalks these woods. 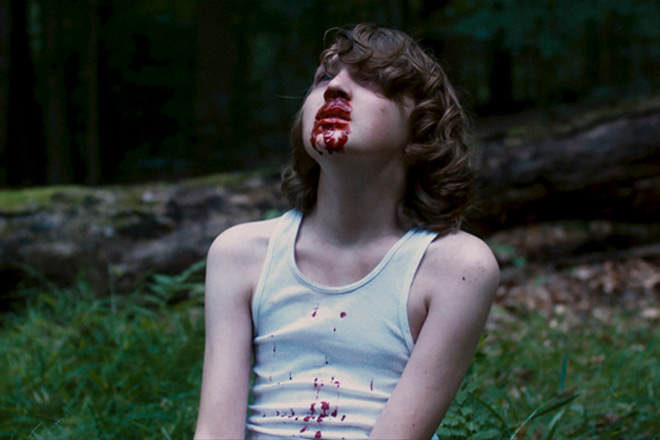 Clocking in at 76 minutes, Desolation was directed by Sam Patton (Don’t Be a Baby short 2012, The Terms of Service short 2015) and written by the team of Matt Anderson and Michael Larson-Kangas. The film is billed as a Drama/Horror/Thriller, though it reads more like Survivalist Suspense (think 2008’s Eden Lake) with elements of Horror and Adventure; in other words, this is a race for survival against a psychopath lurking in the desolate wilderness. Shot in the Adirondacks near Utica, New York, the film is chock full of gorgeous scenery and, initially, invites the feel of a peaceful hike in stunning nature.

There is a wonderful retro feel to Desolation, creating a film that appears to be older than it is and yet feels fresh and modern. Trapped in the woods with an ensemble cast of merely four individuals, this is a film that does a lot with very little: minimalism at its finest. Paige (Abby) and Ochse (Jen) do a superb job of creating a familiar, friendly atmosphere in which two life-long friends engage one another in candid confessions while feeling safe enough to get a little silly. That is, after all, what us gals tend to do together! Duhamel (The Hiker) never speaks a word throughout the entire film, though he does a stellar job of being brooding, darkly ominous, and a spooktacular presence throughout the forest: his silence speaks more horrifying volumes than any words ever could.

The true stand-out in Desolation, however, is young Nichols (Sam), who beautifully embodies all the conundrums of teenage-hood: confusion and fear, fluctuating moods, and the soaring sadness and bitterness over losing his father and facing an unknown future with his now single mother. This is a role that could confuse even veteran actors, and Nichols is superb at conveying a truly deep and well-rounded character. 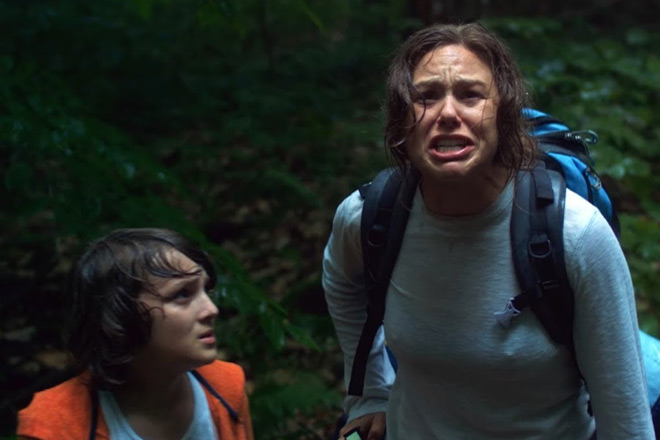 While this film is something that has been done many times before, Desolation never feels banal or cliché; instead, it is an enjoyable viewing that moves at a steady clip and holds the viewer’s interest fairly well. Which, in large part, could be due to the hauntingly flat character of The Hiker, who stalks without reason, though the film is clearly buoyed by the excellent acting skills of its four-person cast.

There are no frills here, nothing over-the-top, and no gratuitous gore for shock value. Instead, Desolation traffics in real-life fears and psychological terrors: the idea that any of us could hike into the woods for a peaceful getaway, only to never be seen or heard from again. Enjoyable and unnerving, CrypticRock give Desolation 4 of 5 stars. 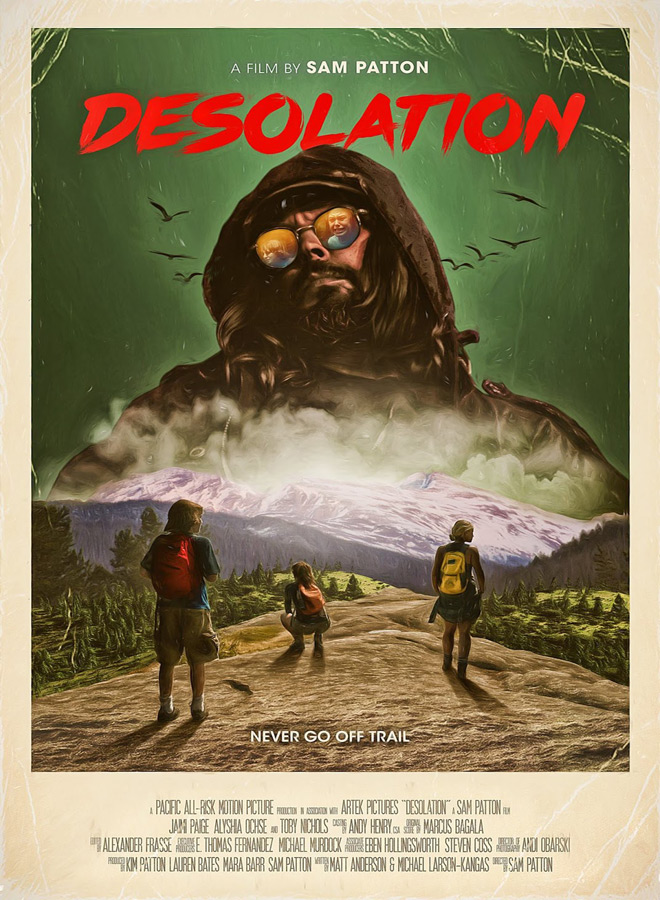