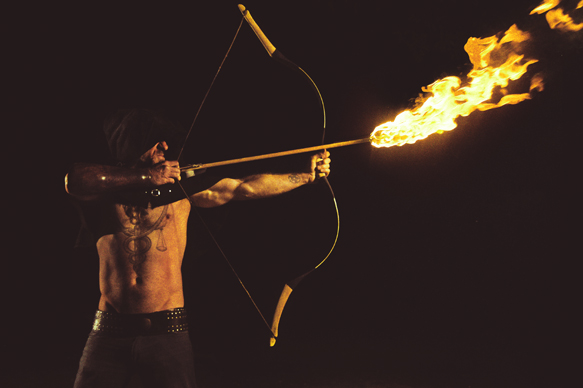 For the uninitiated, Deströyer 666 represents an ideal that, while still prevalent, remains a bit scarce in today’s fast-paced, high-tech realm of squeaky clean productions, multi-album deals, and trend after trend of repeaters and imitators. The ideal is a simple one. It is the muted gleam of bullet belts on dusky stages, catalyzed by the unpolished sorcery of only the most mythical of first albums; the ones which capture fans instantly and remain classics. Deströyer 666 does not compromise. As their name suggests, they embrace fury, speed, and death; albums do not get made unless inspiration strikes. Despite having formed way back in 1994, Wildfire is only the fourth full-length to see the light of day, doing so via Season of Mist Records. Striking out at the world first from the hinterlands of back-country Australia, the band’s backbone and driving force K.K. Warslut moved the beast to Eindhoven in the Netherlands soon after their formation. One listen to Wildfire, and it is evident that inspiration has struck, and struck hard.

Having evolved a sound that is equal parts early Destruction and very early Metallica, this latest blowtorch of fury features a more focused injection of attack than the raw delivery of albums past. Two-thousand and nine’s Defiance album was the last to feature Ian Gray (aka Shrapnel) on guitars, as well as Chris Menning (aka Mersus) on drums. Both of these warriors served very long stints in Deströyer 666, so naturally fans may have been apprehensive about Wildfire. Their concerns were unnecessary.

On drums this time around – since 2012 actually – is one Perra Karlsson (In Aeternum/Nominon), while the second guitar duties are being handled by Roland C. (Cruciamentum/Grave Miasma). Together with the aforesaid band founder KK Warslut and Bassist Felipe Plaza Kutzbach (Nifelheim), this newer lineup is chock full of War Metal/Black Thrash all-stars. Their combined efforts lay absolute waste to expectations, as each song on Wildfire captures the true essence of what unbridled Heavy Metal was meant to convey.

Immediately going for the throat, “Traitor” bursts from the speakers in an ornery riff-storm of hyper-fast picking and a high-pitched clarion scream. A bottom-heavy refrain mean enough to turn a troop of girl-scouts into murderers, oh how the pits will churn when they unleash this bastard live. Leads as abrupt as lightning strikes add dimension and musicality to the mayhem, which continues with the feeling of alarm conveyed in the tremulous riffs of “Live and Burn.” A diatribe song of self-reflection on the persona of the band, the riffs build into a matchless chorus which brings the word epic to mind. Deströyer 666 employs various vocals to great effect, with a rough, cleaner bellow to augment KK’s phlegmy, syrup-thick rasp.

Need to know what this band and this album is about? “Hounds At Ya Back” is the statement song. The atmosphere and initial structure is reminiscent of that in “God’s Old Snake” (Primordial – Redemption at the Puritan’s Hand 2012), but then “Hounds At Ya Back” features a gang-vocal bridge/chorus that is as venomous as it is catchy. Cool leads and a mid-paced cadence lend it the lawless gravity of a legion of bikers cruising along smoldering asphalt. In their eyes is cold defiance, in their grips the trembling throttles of a thousand choppers. Truly magnificent work and a stone cold classic if there ever was one.

Alongside speedsters like “Deathblow,” Destroyer 666 drop in “Hymn to Dionysus,” which though in places a bit slower, charges up and hits the high gear throughout its length. KK knows how to pilot these diverse waters, and does so without losing the peril and the recklessness of the faster numbers. On “White Line Fever,” the band gives the listener that early Metallica feeling again, with more panache and more attitude. The title track comes off like Impaled Nazarene met Motörhead in a dark alley with brass knuckles and a fistful of uppers. Break neck blackened Punk with a Thrash Metal heart, it absolutely destroys all in its path. Reminiscent of their classic “Australian & Anti-Christ” off their 1997 debut Unchain the Wolves, it somehow eclipses the pace and anger of this old gem; not an easy task at all for a veteran band to reach the glories of yore so easily.

Where the most surprise may lie is in closing track “Tamam Shud.” In recent years, bands known for their speed and fury such as Marduk and Behemoth have departed from the norm and penned more proggy, slower numbers to great effect. Here, Deströyer 666 shows they can do more than frenetic leads, gang-vocals, and that ilk. “Tamam Shud’s” shuddering main riff carries a forbidding menace in its teeth. A solemn, wordless vocal ushers in the uniquely arranged clean sung passages woven around some pretty rocking leads. Stunning and well-wrought, the song morphs in the middle to unforgettable heights of melancholy. Though more sedate, there is still a roughshod roguish soul beneath the less aggressive strains. Throw in a ‘whoa oh oh’ section that would make Iron Maiden proud, the clean vocals alongside it get almost bluesy and full of reverb. Cheers to Deströyer 666 for being unafraid to get a little ‘empty shot-glass late night reflection’ on their fan base.

Only a few months into 2016, and Deströyer 666 has set the bar for album of the year very high. Click on the bullet belt and gas up the bike – it is on. CrypticRock gives Wildfire 5 out of 5 stars.