If you could cut yourself in half to commit a crime, and one side does not even know what the other one has done, you would live your life with clean hands, would you do it? A very intense question that is presented by Writer/Director Christopher Smith (Creep 2004, Triangle 2009) in his latest film, Detour. Filled with hypotheticals and impending danger, Detour hit theaters, On Demand, Amazon Video, and iTunes via Magnet/Magnolia Pictures January 20th. 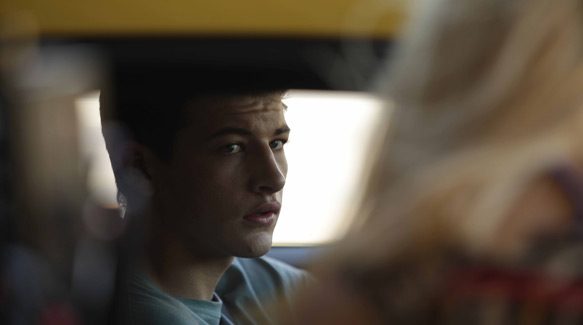 A thrill ride from the start, Detour’s story unfolds as Harper (Tye Sheridan: Scouts Guide to the Zombie Apocalypse 2015, X-Men: Apocalypse 2016) struggles with the stress of his mother being comatose in the hospital after a terrible car accident. A unassuming, clean-cut law student, Harper has his suspicions surrounding his mother’s misfortune, all of which lead back to him believing his stepfather is to blame.

Allowing his logic to be clouded, drinking his troubles away at a bar, he finds himself connected with an unpredictable bad dude by the name of Johnny (Emory Cohen: Smash series, Brooklyn 2015). Johnny, tough and cloaked in mystery of what he is truly capable of, finds the drunk Harper hinting at snuffing out his stepfather. Playing along with Harper’s innuendo, the smooth talking Johnny gets him to agree to monetary arrangements to make it a done deal. Will Harper go through with the life changing crime, or will the better half of him come to their senses?

A disjointed storyline, the occurrence of events in Detour requires the utmost attention. Harper, clearly does not look or act like the murderous type, but sometimes circumstances and emotions can make people do crazy things. 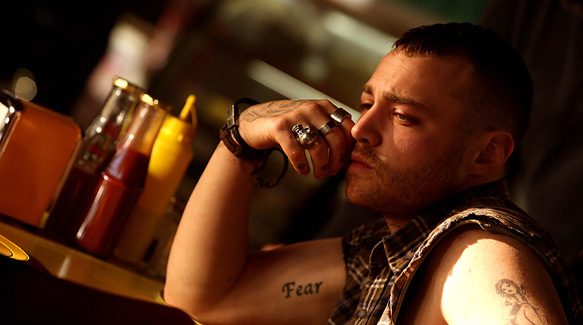 Much of the film leads itself to an alternative reality. Is everything real, or all just in Harper’s mind? Laid out like it could very well be a fantasy, there are key elements for a classic Thriller; a good guy hooking up with a bad guy, falling in love with the bad guy’s companion, and amidst all, going on a wild ride.

In this case, the companion to Johnny is Cherry (Bel Powley: The Diary of a Teenage Girl 2015, A Royal Night Out 2015), a stripper who Harper sees as an abused and unappreciated woman. Although, the question lays in the fact can Harper trust either Johnny or Cherry, or is the situation the other way around?

There are quite a few elements that join together, making Detour a first-rate Thriller. One is the compelling story and direction from Smith. The pace is smooth, and much of the dialogue and character interaction have a rhythm to it. Much like a Quentin Tarantino film; each word in the dialogue is carefully crafted, lending itself as vital to the plot. Furthermore, the cinematography by Christopher Ross (Eden Lake 2008, Black Sea 2014) make Detour a beautiful film to watch. Creatively using split screens showing alternative looks of Harper’s two sides, while the timeline may be skewed, it works magically. 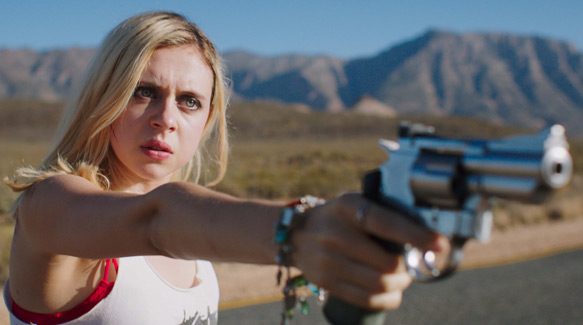 In regards to the acting, Sheridan has been a rising star on the scene for some time now, and his performance in Detour could be his best to date. Extremely believable, his portrayal of Harper fits perfectly with a mellow demeanor, and while he is seemingly naive, is also highly intelligent.

Not to be overshadowed, Cohen does an impeccable job of playing the bad guy with a rough exterior, but in deadly situations, shows signs of emotional weakness. Lastly of the big three, Powley’s Cherry is spot-on as a girl who is volatile, but sweet enough to keep others trusting her.

Overall, Detour is the type of film that will keep viewers’ attention all the way through. Those who are not a fan of films that do not follow a linear timeline, perhaps the film will be confusing, but regardless of such, they will want to wait and see what happens in the end. 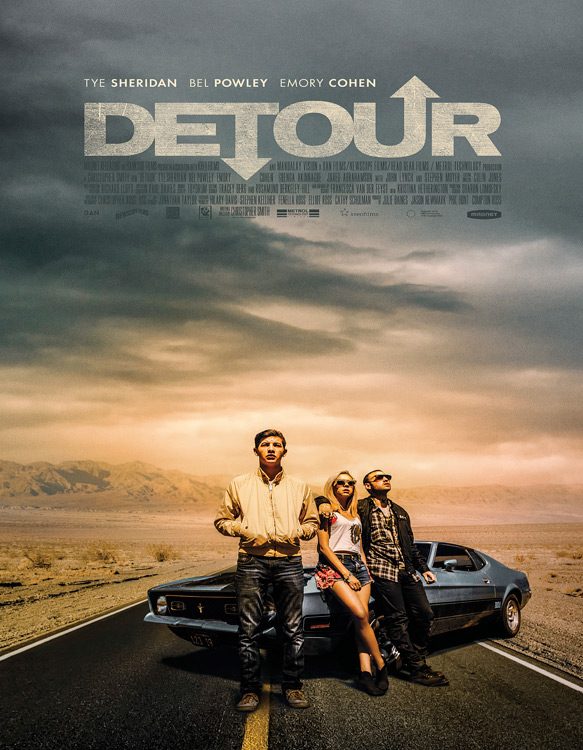