Developing Artist of April 2014 – Till The Last Breath 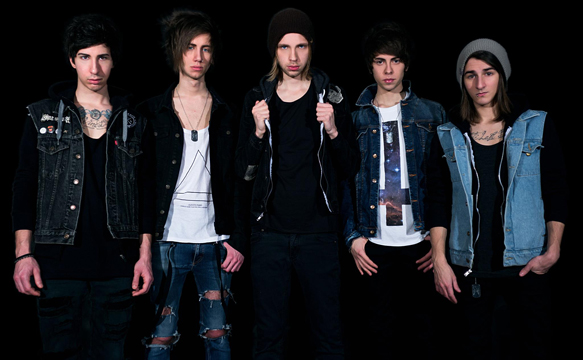 Till The Last Breath is an undiscovered, fresh-faced band in the metalcore scene. The Italian group originated in Brescia in 2010, and now consists of Nicola Bicego (unclean vocals), Alessandro Larini (bass/vocals), Leonardo Piovanelli (guitar), Alessandro Galli (guitar), and Luca Rapuzzi (drums/clean vocals). After dropping their debut EP, Apeiron, Till The Last Breath have featured in shows with well-known bands like Upon This Dawning, Crossfaith, and Bury Tomorrow. Since their first EP, this prospering band has supplemented their refreshing sound with killer singles like “Adam”, “Declaration”, and most recently “Anima.”

From the very beginning, Till The Last Breath arose strong. Their EP Apeiron immediately showcased their talents with brutal instrumentals and captivating guitar riffs that make them stand out. The eerie and harsh mood they give off in this EP gave their powerful sound a solid start. When their current, unclean vocalist Nicola Bicego was added to the lineup, Till The Last Breath’s style was slightly altered, and for the better. When their singles “Adam” and “Declaration” were released in 2012 and 2013, it was very clear that the band had developed musically. These tracks display their catchy riffs and incredibly clean melodies, which are significantly contributed to by the drummer, Luca Rapuzzi. The constant flow and excitement given off in these tracks is what makes the future for this band look so bright. They even continue to show this strength when they released their newest single “Anima” in March of 2014.

This consistent growth that Till The Last Breath shows in their short discography is something to be commended. The way they tie together their empowering rhythm, captivating vocals, and intricate riffs gives each song a strong and memorable identity. It will be interesting to see where this sound takes them as they produce a debut record. In the meantime, the evident talent of Till The Last Breath needs to be heard by any hardcore rock fan looking for something new and exciting to hear.

Purchase Till The Last Breath music on iTunes here.

Developing Artist Showcase – Crystal Joilena
Like the in-depth, diverse coverage of Cryptic Rock? Help us in support to keep the magazine going strong for years to come with a small donation.
Print page
0 Likes