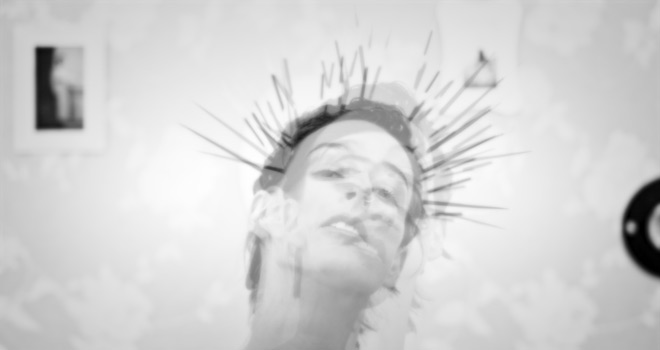 Perugia, Italy’s Augustine is the nom de (musical) plume of multi-instrumentalist Sara Baggini. The name is derived from the main character of Invention of Hysteria, an essay by French Art Philosopher Georges Didi-Huberman. Which is a fair introduction to this talented young woman who is, at all times, both an artist and a musician, hyper-aware of the fine art approach she takes to her eclectic and haunting music.

As she prepares for the releases of her upcoming album, the fifteen-track collection Grief And Desire, Augustine recently released a video for her namesake offering, “Augustine.” The fruit of teamwork between herself and former Perugia Academy of Fine Arts classmates Antonio Rossi and Francesco Biccheri, the video is a black-and-white, fine arts collaboration of the highest order. For both the video and song, Augustine displays a kind of dramatic ecstasy, losing herself to the hysteria of song.

It is absolutely no surprise that such an artist would claim an eclectic array of influences, ranging from Julianna Barwick, Agnes Obel, Kate Bush, PJ Harvey, Sinead O’Connor, Cocteau Twins, as well as Siouxsie And The Banshees, to literary greats Virginia Woolf and Sylvia Plath, to Artist Dante Gabriel Rossetti and the Pre-Raphaelites. The end result here is a woman who thinks visually and artistically, portraying and embracing psychology and poetry, alongside stellar musicianship and vocal artistry.

Born in a small town in the Alps, Baggini began composing in her early adolescence before moving to Perugia at the tender age of 19. There she attended the Academy of Fine Arts, and graduated with a degree in Painting. By 2010, she had released her first home-recorded album, One Thin Line, setting the stage for the forthcoming Grief And Desire. No one-trick pony, Baggini poured her soul into the collection, tracking all guitars, percussion, keyboards, and electronics for herself in a home studio. In fact, Baggini even produced segmented vocal parts that she patched together to create her own one-woman choir for the project!

While Baggini’s YouTube offers up a collection of tracks that help to set the scene – from the moody melancholia of “How To Cut Your Veins Correctly” to the somber poetry of “Caesious Was The Colour” to the superb acoustics of “My Love Speaks Flowers” – her upcoming Grief And Desire promises to be all things beautifully sorrowful, poetically moving, and artistically inspiring. In fact, we expect absolutely nothing less from this songbird who embraces a higher level of intellectual stimulation throughout her lyrical inspirations. A multi-instrumentalist with the voice of an angel and a paint-brush in her pocket, Augustine is definitely an artist to watch for!

Developing Artist Showcase – Crystal Joilena AFI – Bodies (Album Review)
Like the in-depth, diverse coverage of Cryptic Rock? Help us in support to keep the magazine going strong for years to come with a small donation.