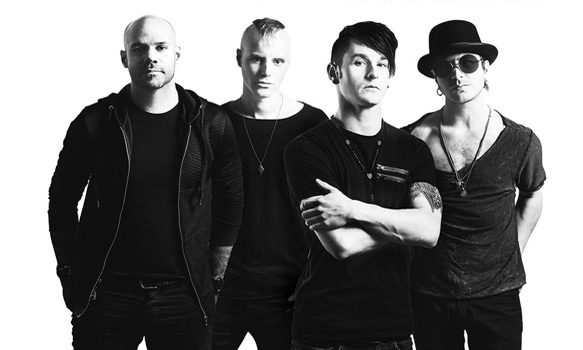 On the fast track to Rock-n-Roll glory, Lead Vocalist Matt Walst was offered a position too good to pass up as Three Days Grace’s new frontman. Initially taking the role as a trial, it all worked out and soon Walst became the multi-platinum rockers full-time singer. Thus, with a busy schedule ahead, My Darkest Days went on hiatus, leaving the remaining members with an empty space in their creative hearts.

Holding no ill-will whatsoever toward Walst, they are extremely supportive of his joining Three Days Grace, but the soul of a musician still yearns to create. Thus, in 2013, My Darkest Days’ Reid Henry (keyboard/vocals) and Brendan McMillan (bass) joined forces to forge a new path, calling the project Never Say Die.

Fittingly titled, Never Say Die is a testament to the will to move forward and continue a musical dream. Although, there needs to be a foundation to do so, and Henry states, “Never Say Die started in the front passenger seat of the My Darkest Days BandWagon.” He went on to add, “During overnight  drives,  I’d squeeze through a small window to the front of the bus and  stay up writing, singing, and occasionally wedging my laptop on the dashboard to record.”

With concepts in place, Never Say Die would soon come to life over the next couple of years of development as Henry took on lead vocals/guitar, McMillan remained on bass, as they joined up with their friend Gabe Gallucci on drums. The years of performing together and partaking in a rigorous touring schedule with My Darkest Days gave them unmatchable musical chemistry, and with that, they were ready to Rock. Although, like any project, it took time to fully take form and get off the ground. In fact, it was not until early 2016 that Never Say Die truly grew legs when their demos caught the attention Age of Days Drummer Mike Langford, who is also a producer, working in the past with Evans Blue, Parabelle, and Scarlet White.

Excited by the potential of Never Say Die, Langford began working with Henry and McMillan on some tracks, soon bringing in long-time tourmate Dane Harsell on guitar/vocals. Initially planning to put together an EP, the sessions went so well, a full-length album came out of it all and Never Say Die was now coming fully into focus. Anxious to show their new music to the world, on January 20, 2017, the band unveiled the their debut album entitled Destroy + Rebuild.

Perhaps a metaphor for the core members of Never Say die, who are starting from the ground up after success with My Darkest Days, the efforts put into the new album are not in vain. Consisting of ten tracks in total, the independently released album picks up where My Darkest Days left off, but with a new flair amidst it all. Catchy, heavy, and highly melodic, it is Hard Rock with a charge of Electronic elements as heard on songs such as the single “Like a Nightmare.” Furthermore, tracks like “Numb,” debut single “Automatic,” and “Born Again” could easily be heard in rotation on SiriusXM’s Octane.

Accessible enough to please an Alternative Rock or Hard Rock fan’s needs, Never Say Die do not sell themselves short in their music, as darker cuts like “Outside Looking In” and “Fall Apart.” Songs such as these show a band that change like a chameleon, with an ability to fit in various genres. Still, this is only the beginning for a band born out of experience and a good taste of commercial success.

All this in mind, Never Say Die have bright hopes for the future as momentum picks up with more people discovering Destroy + Rebuild. Henry says, “No matter what fads or trends come to pass, we will always stay true to ourselves and make the music we love.” Sincere and from the heart, Never Say Die is a new beginning filled with endless possibilities as well as many unknowns, but that is the price to pay for never giving up. 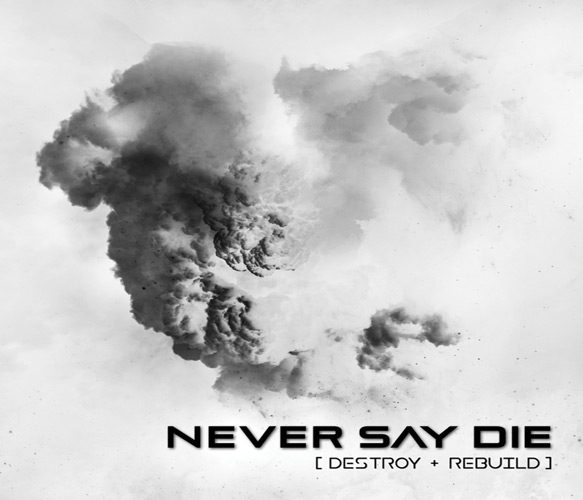